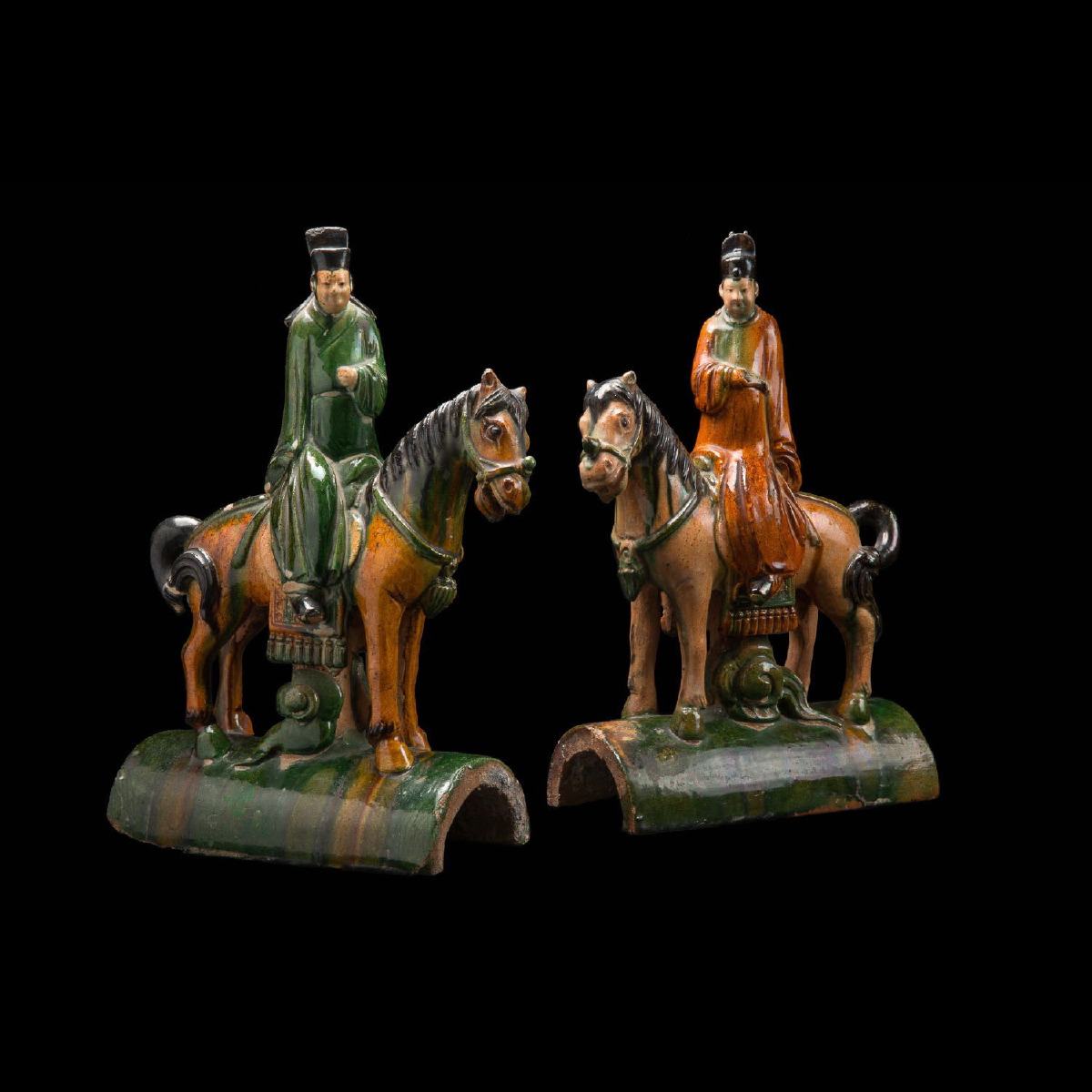 A nice pair of elegant ridge tiles molded and decorated with riders on their horses, presenting an amber yellow, black and green glaze of good quality called Sancai. Each statue represents an officer dressed in a long belted dress and wearing the typical black hat of dignitaries. Horses are standing four square on their tile. Perfect, not restored. Pleasant thick good and shiny glaze with beautiful varied colors. Very good state of preservation, no visible repair, only some small cracks on the glaze due to age.The beauty, spirituality and sophisticated techniques of Asian art as well as African art fascinated the Rockefeller family. They discovered China while on a great voyage with the patriarch, J.D. Rockefeller Sr. (1839-1937) for the Rockefeller Foundation which was concerned with medical aid in China. After a decade of working with his father, Rockefeller Junior and his wife Abigail decided to dedicate themselves to art and philanthropy. Starting in 1908, she fitted out the family estate in Pocantico Hills with an exquisite taste for Chinese art. During the first quarter of the 20th century, they amassed a large amount of sculptures, prints, and ceramics. One of their treasures is the collection of Chinese ceramics formed by three generations: J.D. Rockefeller Sr. and his son particularly appreciated the Ming and Qing dynasties, while his grandson, Nelson Aldrich Rockefeller (1908-1978), was more inclined towards Han and Tang objects. In the 1940s, Nelson and his brothers John Davison, Laurance, Winthrop and David established their own foundation, The Rockefeller Brothers Fund, Philanthropy for an Interdependent World. It was J.D. Rockefeller III who founded the Asia Society, dedicated both to the promotion of social and cultural exchanges between Asia and the USA and to the conservation of their collection. This great family’s passion for Asia led them to study philanthropy on a global scale while they also created one of the most beautiful collections of Asian and African art, parts of it now visible in the Metropolitan Museum of Art in New York as well as at the Boston Museum of Fine Arts.