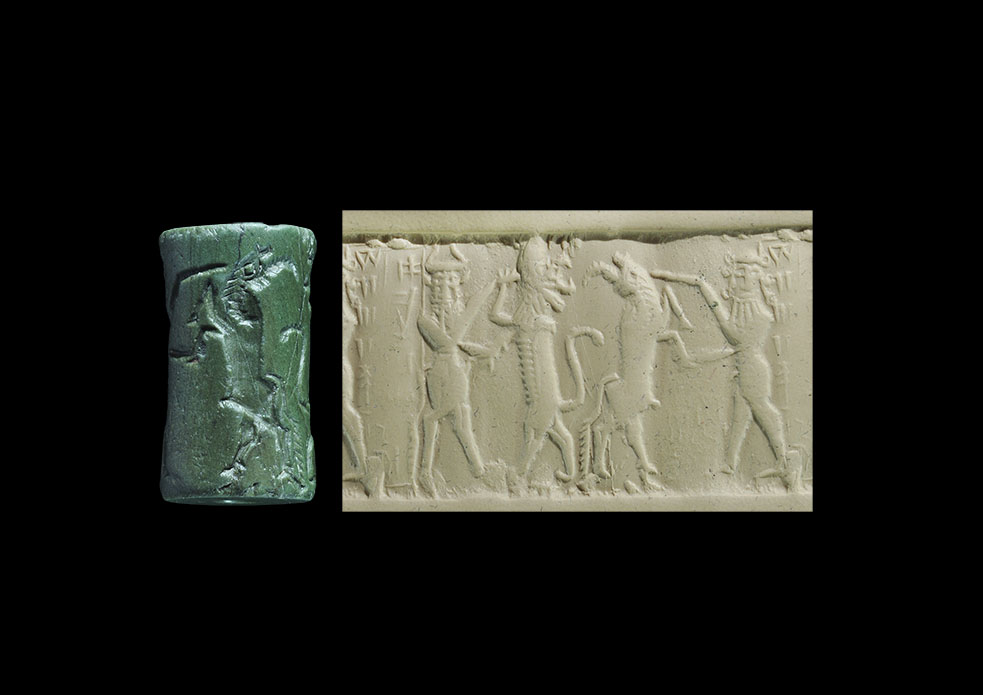 Cylinder seal of green stone with a hole running all the way through the centre. It is engraved all around with two figurative scenes representing Gilgamesh fighting a lion and the Enkidu against Humbaba. There is as well as a cuneiform inscription. The hero Gilgamesh is depicted in profile, one leg forward and the face seen frontally. He wears the characteristic beard and short tunic of heroes. Fighting against a lion, he seizes its paw and hits the animal with a club. The lion is standing on its hind legs, his maw turned towards the hero with the tongue hanging out. Enkidu can be recognized by his horn and paws attesting to his wild origins. He is dressed in the image of his friend Gilgamesh and is positioned identically. He is fighting a monstrous being who could be Humbaba, the Guardian of the Forest, with a dragon’s head and feline body. The monsters face is also turned towards the hero. Between Gilgamesh and Enkidu is a double line of cuneiform inscription. Very fine condition.Enkidu was a wild man, created of clay and living with animals. His body is furry and he is often depicted with animal horns. He became progressively less savage and became Gilgamesh’s best friend, filling the role of sage and advisor. Humbaba, the guardian of the forest of cedars will be killed by his two friends later in the epic, Enkidu’s death will be a drama for Gilgamesh. Unable to get over it, he sets off on a quest for immortality. Gilgamesh finally had to reconcile himself with death as that is Man’s fate.
The seal was an object of great importance in the societies under Mesopotamian influence. It may have had many uses, either as a signature stamped on administrative documents, as a piece of identity for common individuals or as a ritual offering. Worn as a talisman, it was part of a tiara or became a pendant attached to a string thanks to a central hole. Around the middle of the 2nd millennium, the use of the dynastic seal began to spread, to such an extent that using the seal of his predecessor was, for a king, equivalent to absorbing the former’s “virtues”.