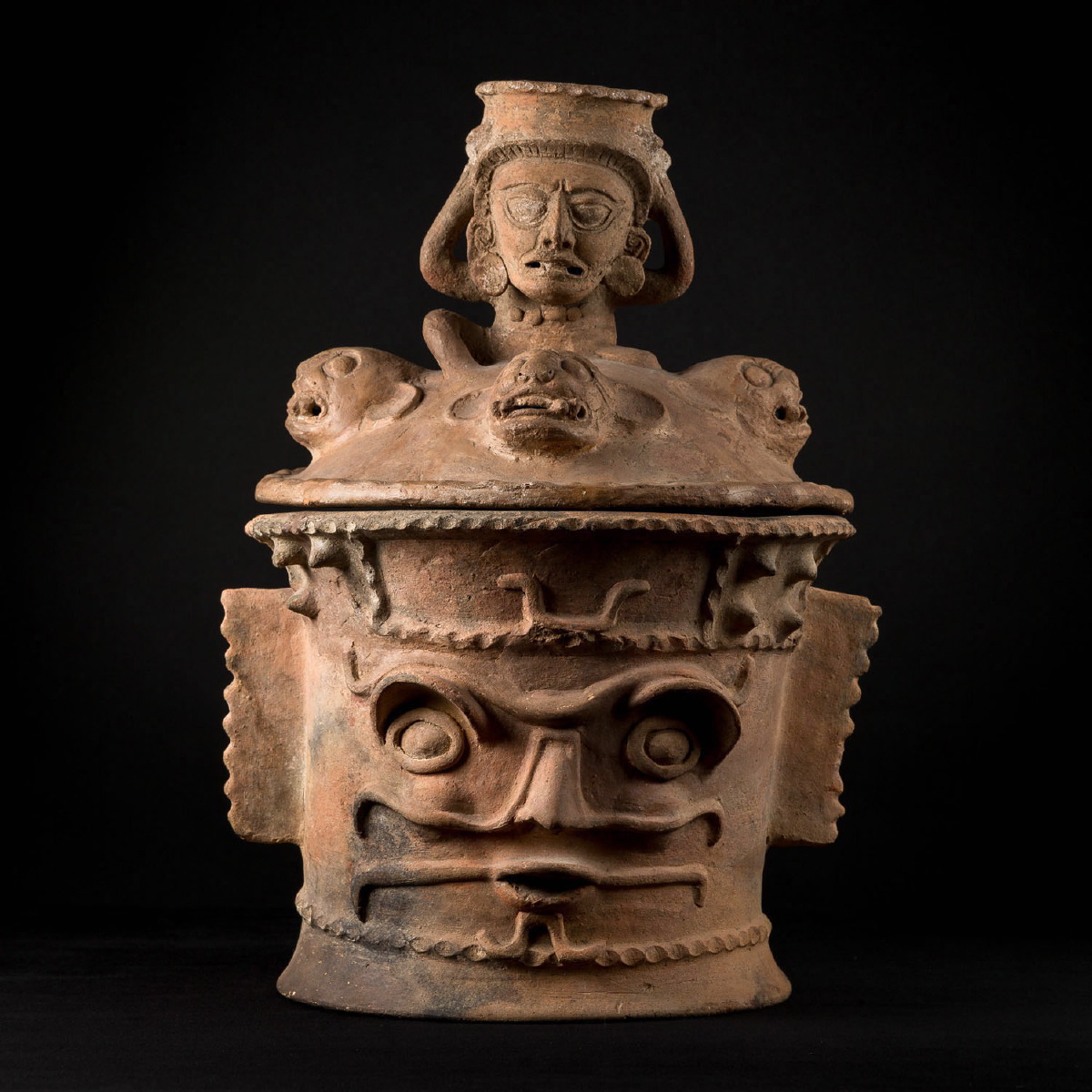 Large, rare Maya urn in pale beige terracotta with traces of reddish-orange and cream-coloured pigment. Cylindrical in form, it widens slightly at the base and at the rim. There is a textured decoration showing a face with wide, round eyes, raised eyelids shown in relief, and a single wavy eyebrow. Its nose is aquiline, the mouth half-open with thin lips. Large serrated ears on either side serve as handles. The domed lid is topped by a seated figure with a disproportionate head carrying a spherical urn, which may have served as a small chimney. The figure has a band around its forehead and an alarming expression with bulging eyes and wrinkled features suggesting old age. It also wears impressive disc-shaped earrings. The lid is ornamented with another smaller urn featuring a human face. This stylised head has highly expressive round eyes with prominent eyebrows, crowned with an ornamental frieze. Four snarling leopard heads are placed at the four cardinal points of the lid. The cover shows some restoration, visible re-gluing, and some fire-blackened areas from ancient times.

This rare Maya urn is made of beige terracotta with traces of orangey-red and cream-coloured pigments. It is ornamented with a decoration in relief consisting of a face with open, protruding eyes under eyelids shown in relief, surmounted by a single large eyebrow crossing the forehead in the shape of a wave. The nose is aquiline, and the lips thin, while the ears serve as handles. The cover forms a dome on which is sat an ancestor with an oversized head and a threatening wrinkled face. He is carrying a globular urn that probably served as a chimney. Leopard heads showing their fangs are fixed at the four cardinal points, being a well-loved symbolism among the Maya. The Kaminaljuyu site, located in the suburbs of Guatemala City, reached its height during the Classic period, although in a later period it came under the influence of the city of Teotihuacan. Big urns of this type are rare and sought after.