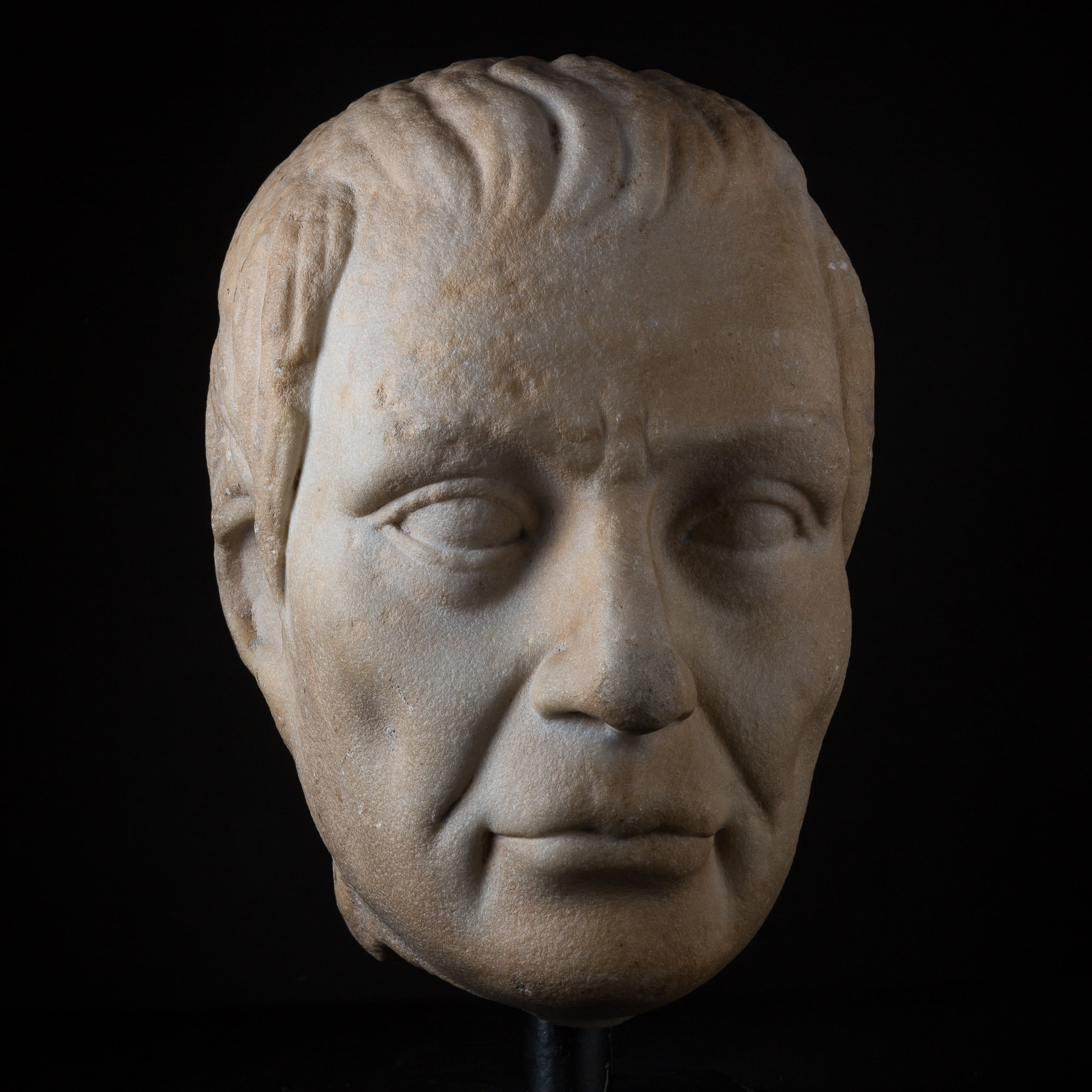 ← Return
Enquire/Buy
Print-Out
View price
Certificate
❤ Add to Wishlist
€ EUR 64.000,00 - £ 57120 - $ 69996.8 - C$ 93542.4
All purchases must be paid in Euro. Other currency prices for indication only
ANCIENT GREECE AND ROME
MONUMENTAL PORTRAIT OF SENATOR CASSIUS (85-42 BC)
Old French collection
Object certified authentic and sold with an expert certificate. Satisfied or your money back.
Object :
Nº 1855
Material :
Marble and similar
Type Object :
Sculpture
Dimensions :
Height: 32 cm (12.5″) without the base

Grand portrait in fine white marble. Realistic head of a beardless man with a well-shaped oval face, slightly emaciated with hollow cheeks, large eyes, sensual mouth and full curved lips. The wrinkles at the base of the nostrils frame the mouth, while the hairstyle consists of long wavy locks arranged on the head with pieces brought forward onto the forehead. Traces of erosion, small defects and scratches due to age. Excellent state of preservation. Gaius Cassius Longinus (died in 42 BC) was a politician and a Roman general, known for conspiring against Julius Caesar. Cassius belonged to the Cassia people, a family of the Nobilitas of plebeian stock which acceded to the consulate at the beginning of the 2nd century BC. His political career began in 53 BC when he campaigned against the Parthians and succeeded after the battle of Carrhae to collect what remained of the Roman army in Syria. In 52 – 51 BC, he resisted the Parthians of Antioch. In 50 BC he was elected tribune of the plebs and supported Pompey during the civil war against Caesar, during which he inflicted heavy losses in the Straits of Messina. In concert with Marcus Junius Brutus and sixty men, he was the soul of the conspiracy to assassinate Caesar on the 15th of March, 44 BC. He then left Italy and went to Syria where he took up power against Dolabella. At the beginning of 42 BC, he joined Brutus in Macedonia and was acclaimed as Imperator by the troops. During the First Battle of the Phillipes (Oct.42), against Marc Antoine and Octave, Cassius had no news of his brother-in-law and battle companion Brutus (that was said to have died) and decided to take his own life with his sword, believing that he had lost everything. Brutus named him “the last of the Romans”.