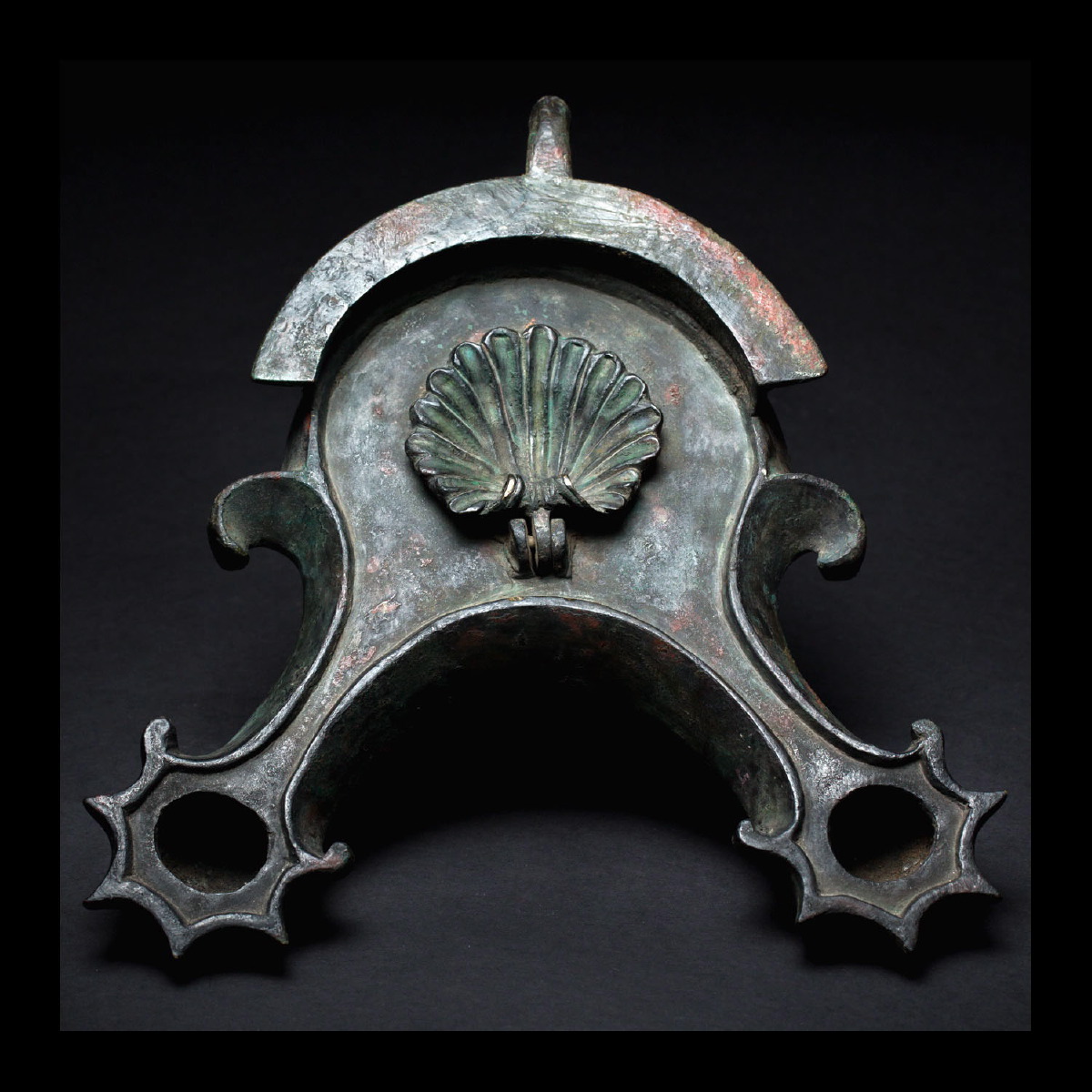 A very fine oil lamp of a big size, in cast bronze with two grooved spouts allowing for a double wick. Hinged cover in the form of a scallop shell. Flat rims, two volutes on each side below the two nozzles both with air-slits, rising curved grip at the rear of the lamp. The lamp stands on a ring base with a disc forming the bottom of the oil chamber. Very nice old patina on the bronze.
This large oil lamp is an everyday object, and judging by its refined workmanship and size, it doubtlessly came from a patrician household. Made of a bronze that has become burnished and oxidised over time, the lamp has a two-spouted form with a seashell-shaped cover. This kind of lamp was indispensable in houses and temples. In 1865 one of the first Palaeolithic oil lamps was discovered at Mouthiers in Charente (France). Using the natural concave form of oysters or scallop-shells, they have been found placed around the deceased in multiple prehistoric sepulchres. In Greek and then Roman Antiquity, this was the only type of lamp. They were mostly made of terracotta, but bronze and stone were also used for the most beautiful among them. The type of oil used varies greatly according to the era and place in which they are found: in Mesopotamia, they had the mineral oil naphtha, which they learned to refine very early, while the Egyptians preferred castor oil. By the sea, people used fish oil, and in the south, olive or peanut oil. The wicks were made of twigs, braided reeds, flax, or hemp, and a normal lamp provided two hours of a light brighter than that of a candle. All these oils made houses stink and covered the walls with black soot, so people willingly added fragrances to them, in order to please man as well as the gods. The scallop-shell motif is linked to Aphrodite, a goddess born in the sea, where she endlessly renewed her virginity. Apelles’ famous painting, which travelled as far as Rome, shows Venus rising from the sea. The model seems to have been Campaspe, one of Alexander the Great’s mistresses. The sun-shaped scallop shell, which symbolised the wonderful life of the hereafter, would come to be adopted by the nascent Christian church, adorning the tomb of Constantine at Byzantium.