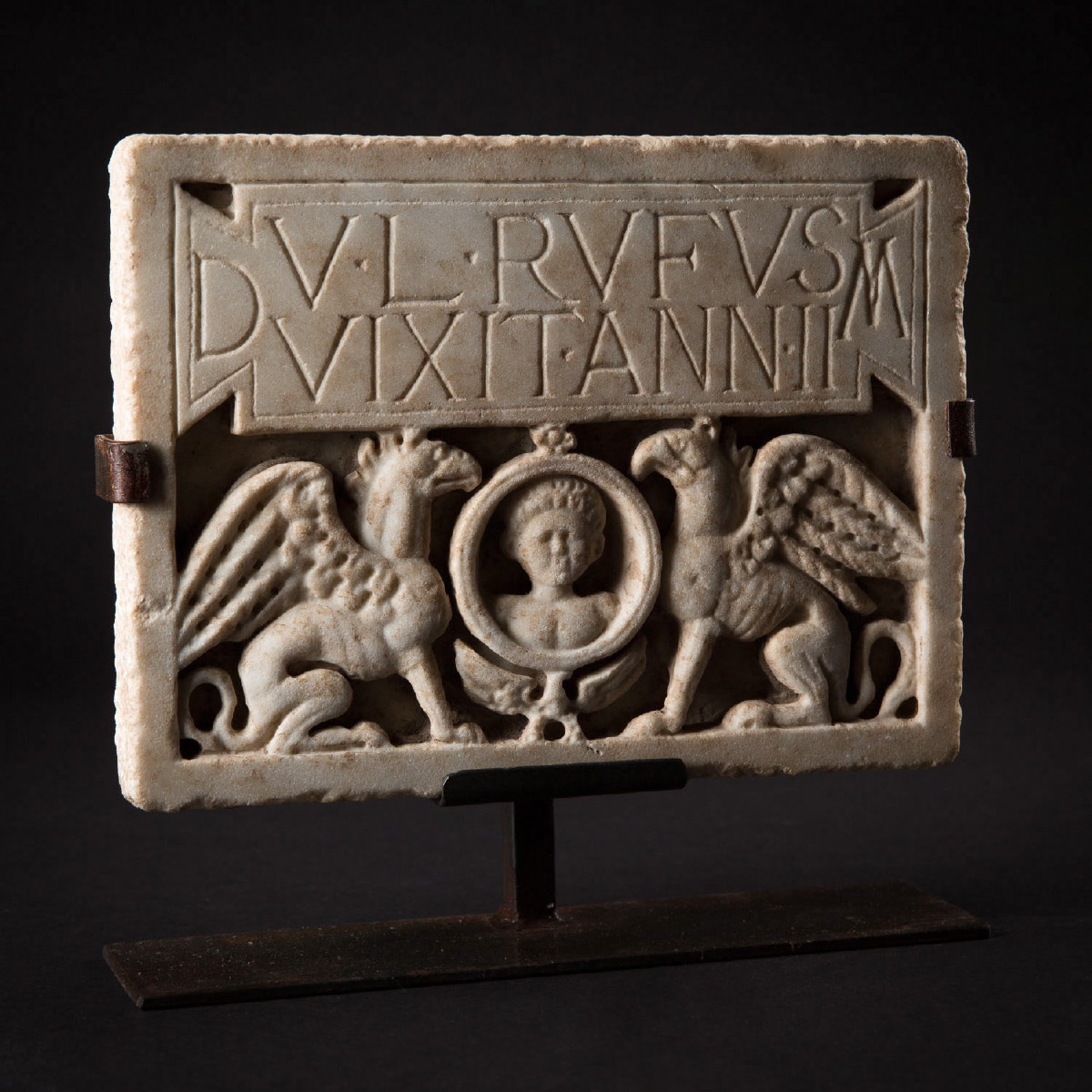 An excellent rectangular plaque of white Italian marble carved in depth. Two griffins represented in low relief are framing the portrait of a young boy in a medallion. A Latin epitaph is engraved on the superior part of the plaque which is flat. Circular traces of drill can be observed on the wings of the griffins and around the design. This tool, often used in Greco-Roman sculpture, facilitates the cut of the volumes and the creation of contrasts. Excellent state of preservation, some very minor scratches due to age. Old patina.

The tradition of epitaph comes from ancient Greeks who made it a codified science of inscriptions but it was the Romans who used it during funerary speeches. On this rectangular, white marble plaque, two griffins frame a young child in a medallion. One can read the abbreviation D.M, standing for the formula Dis Manibus, which means “to the gods Manes”, who embodied the souls of the dead. The name of the deceased is written according to the Roman custom of the tria nomina: V refers to the first name, L is the family name, or gentilice, and Rufus is the nickname. The inscription Vixit Anni says “he lived for these years”. We find out that this is a commemorative plaque dedicated to a child who was only two years old when he died. The skilfully sculpted griffins shown in bas-relief are mythological animals, which have been depicted in the Middle East since High Antiquity. A sacred animal, it appeared frequently in sanctuaries and as a tomb ornament because it was the guardian of the deceased. They were depicted as winged lions with the heads of eagles and a snake-like part of the body. This style of representation could be found in Elam in Mesopotamia, and in Egypt dating back to 3000 BC. The reliefs of the palace of Ashurnasirpal II at Nimrud, are also superbly decorated with them, and from the 12th cent. BC, whithout any reason, we see them disappear. These winged spirits came back into fashion in Archaic Greece starting from the 8th century BC, when they tended to be shown with the body of a bird instead. The Etruscan took them over, using them to adorn not only their sarcophagi but also their beautiful blackand- red painted terracotta vases. Numerous Roman dwellings had walls decorated with variants of the design: some griffins wearing horns, some shown leaping, while others like these, sit in couples. Its use in decoration became so fashionable in Rome that, little by little, the image became disconnected from the worship of the dead. In becoming a decorative motif of the patrician houses, griffins have remained simply as marvellous animals, symbols of supreme elegance. Here, the small Rufus finding himself among them, felt protected for eternity.