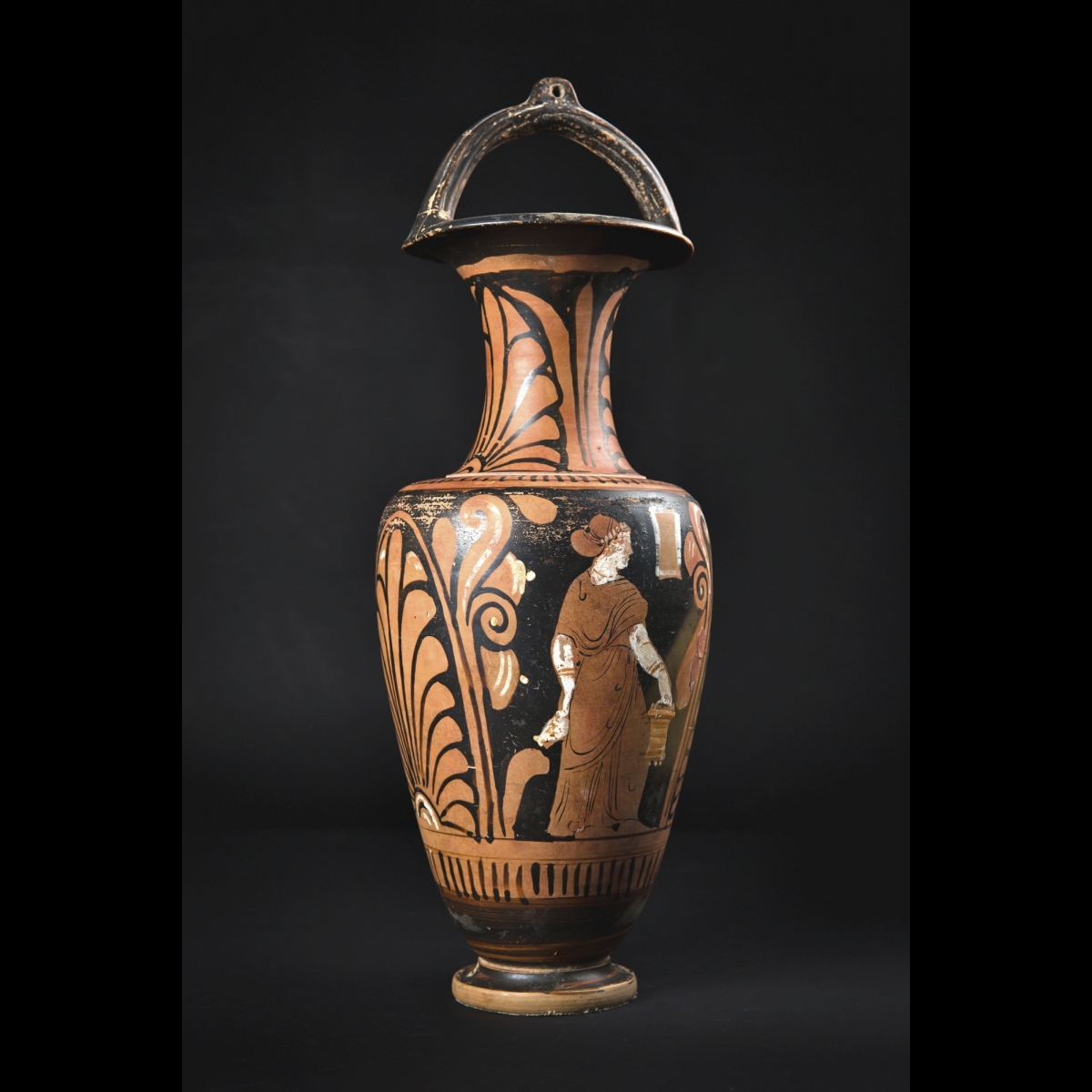 Amphora in terra-cotta with a decoration of red figures. Semi-elongated belly on a piedouche, narrow and convex neck. Vertical handle with central protuberance attached to the mouth, pierced with a hole. On one face, a woman represented three quarters from behind, skin painted white, wearing a long chiton, of which the folds are drawn with a fine brush, and holding a situla in her left hand. On the other face, a Samnite warrior is painted with a short tunic holding a lance in his right hand. Helmet, belt and shield are painted in white. Figures separated by two big palmettes. Two horizontal friezes of parallel lines are placed on the low part of the belly and on the shoulder of the vase. Neck decorated with palmettes and with geometrical forms. The object is signed on the neck with what could be Etruscan letters. Signatures are very rare on that sort of vase, even if we still have no reply on who could be that painter. Good state of preservation. Light wear on the surface in some areas of the painting.

Situla is a Latin term used for elaborated bucket-shaped vessels that were found in Europe from the Iron age, and most of the time were made of bronze. This situla has the typical shape of the potteries coming from workshops located in Campania in the 4th century BC. where the centres of Capua and Cumae are known for the production of situlae. The piece is signed on the inner lip of the neck, which is unusual, signing was not really a habit of the pot makers at that time. Maybe the designer of this vase considered himself so famous that he would add value to the vase by signing it. A picturesque note is created by the depiction of Samnites, soldiers who were among the first gladiators of the Roman games, dressed in local costume. After the defeat of Samnium, located south of the Apennines, in 308 BC, the Romans confiscated the Samnites’ weapons and armour, allowing them as a punishment to be carried by warriors taking part in ceremonies and fake battles organised to accompany banquets. Here, the warrior wears a short tunic, and the helmet, belt and shield are all painted in white. The figures are separated by two large palmettes. The Musée du Louvre possesses a twin piece.