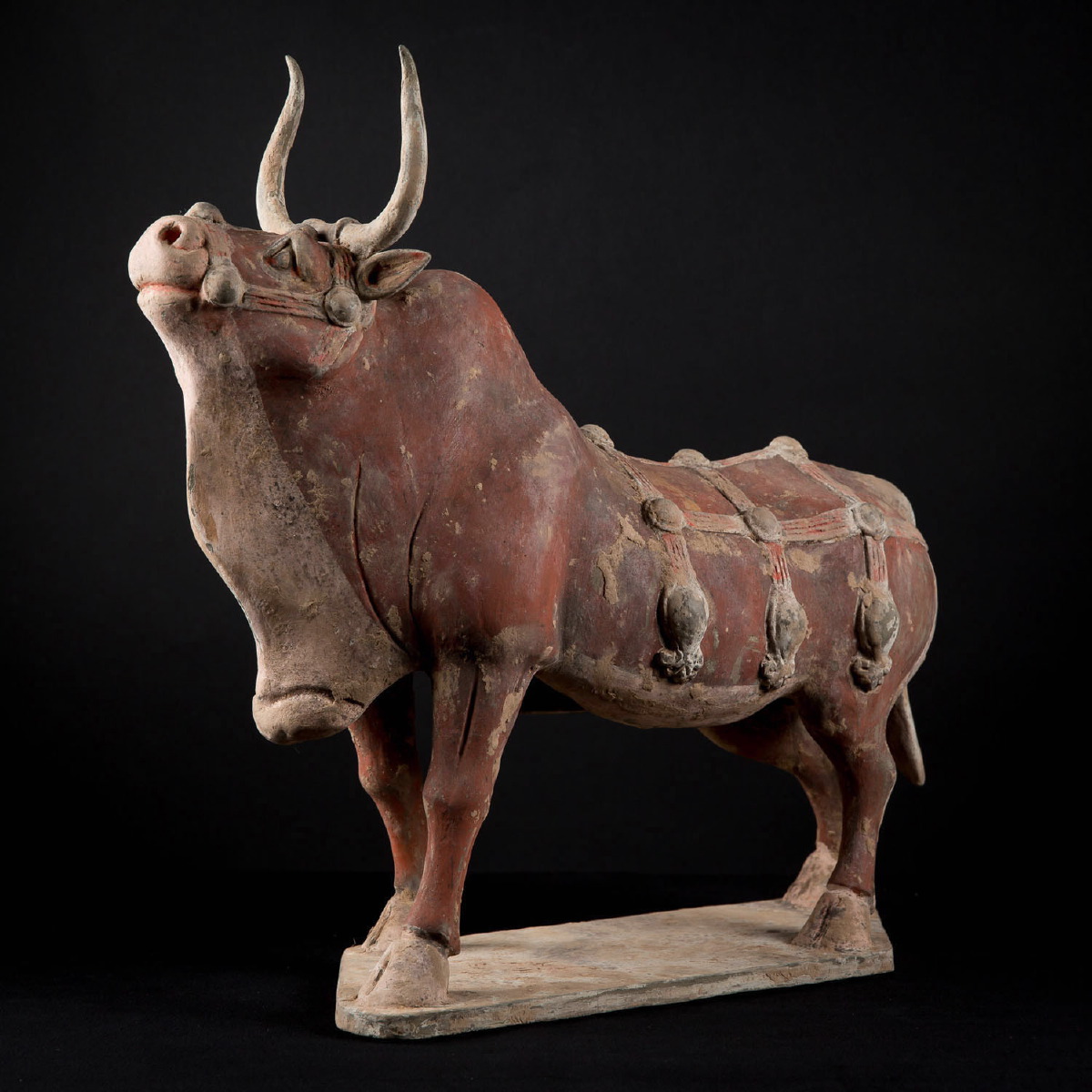 Moulded, grey-coloured terracotta buffalo covered with a white slip and decorated with polychromatic details. The animal is set on a base in a walking position, the head held up and crowned with two beautiful, curved and thick horns in the shape of a lyre. The smooth muzzle is extended and the body wears a harness with a motif composed of six serpent heads. The whole piece is powerful and well balanced. Excellent state of preservation. Possible ancient restoration.

The buffalo was an important symbol in Ancient China: it represented work in the fields, but also spring, the source of life and the promise of richness to come. It appeared in several myths and legends. There was even a cult dedicated to the king of the kine, “Niu-Wang”, and peasants erected altars to him, so that he would protect their herds from epidemics and diseases. In Taoism, Lao Tseu is often represented riding a buffalo, as the learned sage , being neither a noble nor a warrior, couldn’t have had a horse for a mount. In Chinese, the generic term to refer to a buffalo is niu, meaning “animal that draws the chariot”. These magnificent and rare examples belong to the race of Bubalus, according to Hamilton Smith, who studied and catalogued them in 1827. The buffalo is also a sign of the Chinese zodiac, whose virtues are tenacity, equilibrium and patience. These two buffaloes in grey terracotta are covered with a dark red slip, meant to resemble the natural colour of their coats as closely as possible. Solidly planted on their terraces, they exude force and power, as one would expect from beasts of burden. Their legs are short and muscular, the neck is wide, and the hump is large. The handsome horns are thick and curving in the shape of a lyre, the hairless muzzle is exaggeratedly large and the harness on the animal’s back consists of a motif of six stylised snake heads which served to protect the animal. The realism is intense, and the movement perfect. The animal has been minutely studied in order to bring out the beauty of its natural, simple strength. In this way, daily life becomes a pretext for a fanciful vision of work in the fields. These two statues are rare: they give off a particular sense of calm energy. Under the Wei, even the buffalo, a labour animal, becomes a sophisticated work of art.