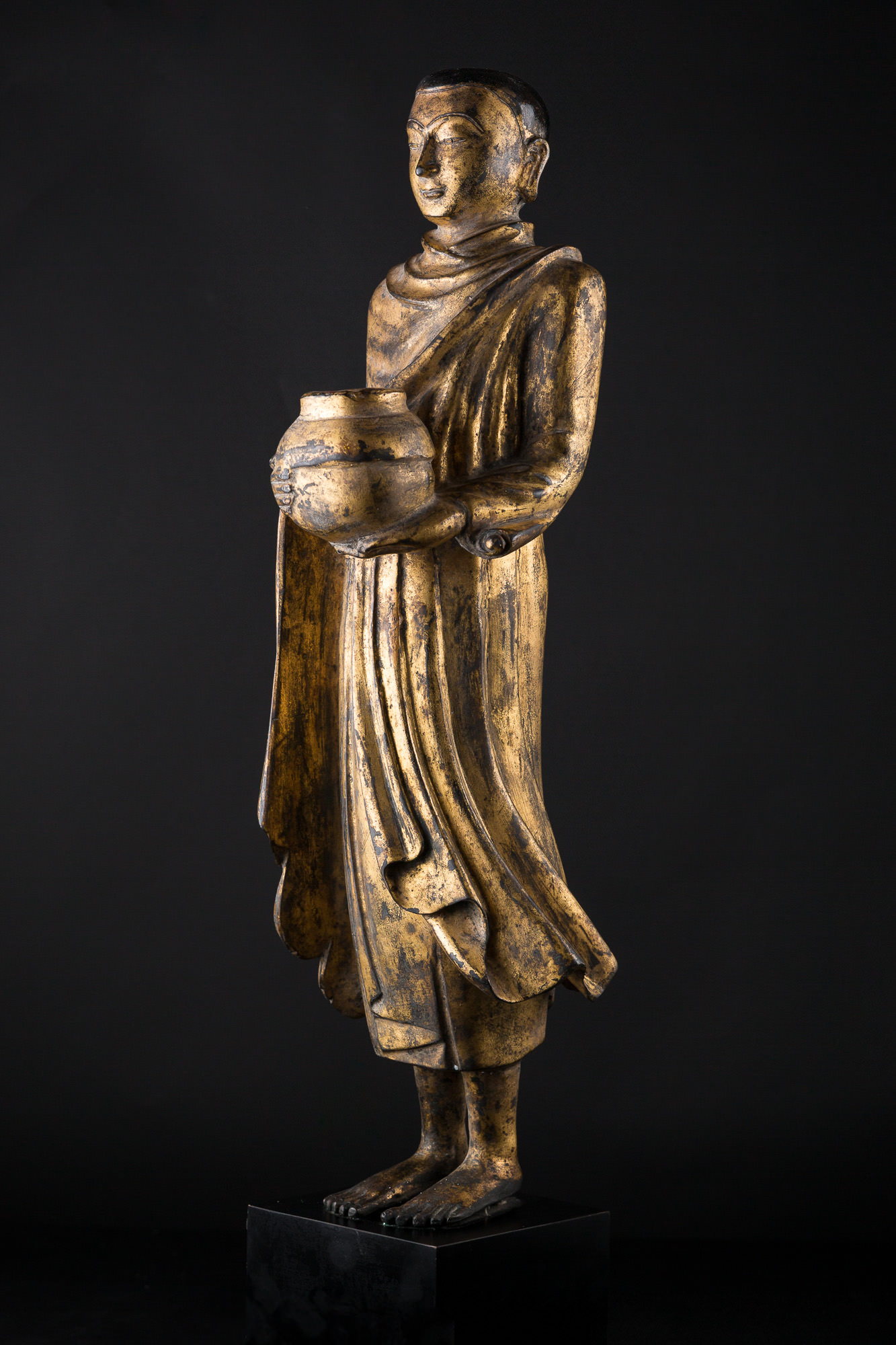 Statue depicting a disciple of Buddha, draped in a long pleated monastic robe and holding a jar of offerings. Gilded with bronze lacquer.

The statue of Buddha that we see in any Buddhist temple today is normally accompanied by the statues of His two great disciples. The one standing at the left side of Buddha's statue is Maha Mogallan while the one at the right side is Ananda. However this was not the situation when Buddha began propagating Dharma. Not long after Buddha attained enlightenment, Sariputra and Mogallana entered the Sangha and became His attendants. Mogallana always stood on Buddha's left while Sariputra stood on His right.

After becoming Buddha's disciples, Sariputra attained liberation from bondage and reincarnation within two weeks while Mogallana did it in seven days and was already an Arhat with supernatural powers.

Mogallana was very optimistic and brave and he always took up the cudgels for justice. In addition, he was pre-eminent above all Buddha's disciples in terms of supernatural powers as he always utilized his powers during Dharma propagation. Though Buddha disallowed His disciples to reveal their divine power and delude others, He always praised Mogallana for his supernatural powers.

He was actually a fisherman in his previous life. Later he realised that earning his livelihood by catching fish was a karma of great suffering. He also felt that one must cultivate merits for a better future life; therefore, he decided to change his line. Then one day, he met a Pratyeka-buddha and was impressed with his dignified manner. With reverence, he invited the Pratyeka-buddha to his house to receive offerings. As the Pratyeka-buddha was not good in preaching, he could only use his divine powers to save the world. After his meal, he jumped into the air and moved freely in all directions. Mogallana was so impressed that he vowed to attain supernatural powers in his next life.

Mogallana was still enthusiastic in propagating the Buddha Dharma even when he was getting older. And that invited the jealousy of the heretics. They could not harm the Buddha but they awaited a chance to assassinate Mogallana.

Once, while Mogallana was on a mission of propagating the Dharma, the heretics saw him passing by the foot of a hill. They pushed some heavy rocks down the hill and Mogallana was crushed to death!

King Ajatasatru was every furious when he knew that Mogallana was assassinated by the heretics. He then ordered the arrest of the murderers and as a result, a few thousand heretics were thrown into the fire pot!

The death of Mogallana caused much sorrow to the other monks. They wondered why Mogallana did not use his great supernatural powers to resist the heretics, or at least to avoid their plot. So they went to consult the Buddha.

Being aware of the future happenings on earth. Buddha was not as emotional as His disciples. Instead, He said calmly to them, "Mogallana could have resisted the heretics with his supernatural power. However, when Kaplivastu was once being attacked by King Vidudabha, Mogallana had tried his supernatural power to save the people there but did not succeed. He then realised that supernatural power could not outmatch karma and that one had to face his karmic effect. Moreover, when he was a fisherman in his previous life, he had killed many lives. Anyway, don't be sad. The Truth will not vanish though Mogallana has passed away."

"But, Lord Buddha, we still feel that his death is really a tragic one!" said the bhikkhus.

"Bhikkhus ! Death is nothing to those who have attained enlightenment. Birth and death are facts of life and we should not be afraid of death. The more important thing is whether we have the confidence in facing death. Mogallana had died with a clear mind and entered Nirvana. Furthermore, he sacrificed his life for the Dharma. Therefore, his death is commendable indeed!"

The disciples who were still very sad asked the Buddha again, "Lord Buddha! We know that we should have the spirit of sacrificing our life for the Truth. However, Mogallana had sacrificed himself too soon. We really need him to lead us in the Dharma. Lord Buddha! Why did you not tell him to take precaution against the heretics?"

The Buddha comforted them in an encouraging tone, "Bhikkhus, Mogallana could have actually protected himself with his miraculous power. But he knew that no one could escape the karmic result due to cause and effect. Since he killed many lives in his previous life, he had to go through this karmic effect. In addition, he had vowed to devote his life to the Truth. As his wish had come true, he gladly entered Nirvana. If all my disciples can have the spirit of Mogallana who sacrificed himself for the Dharma, it will benefit all sentient being. Bhikkhus! You should all follow the example of Mogallana!"

The bhikkhus were deeply touched by the words of the Buddha. They saw that in future more and more people would practise the Buddha's Dharma if they followed in the footsteps of Venerable Maha Mogallana and the Buddha's Sasana would spread for the benefit of all sentient beings.