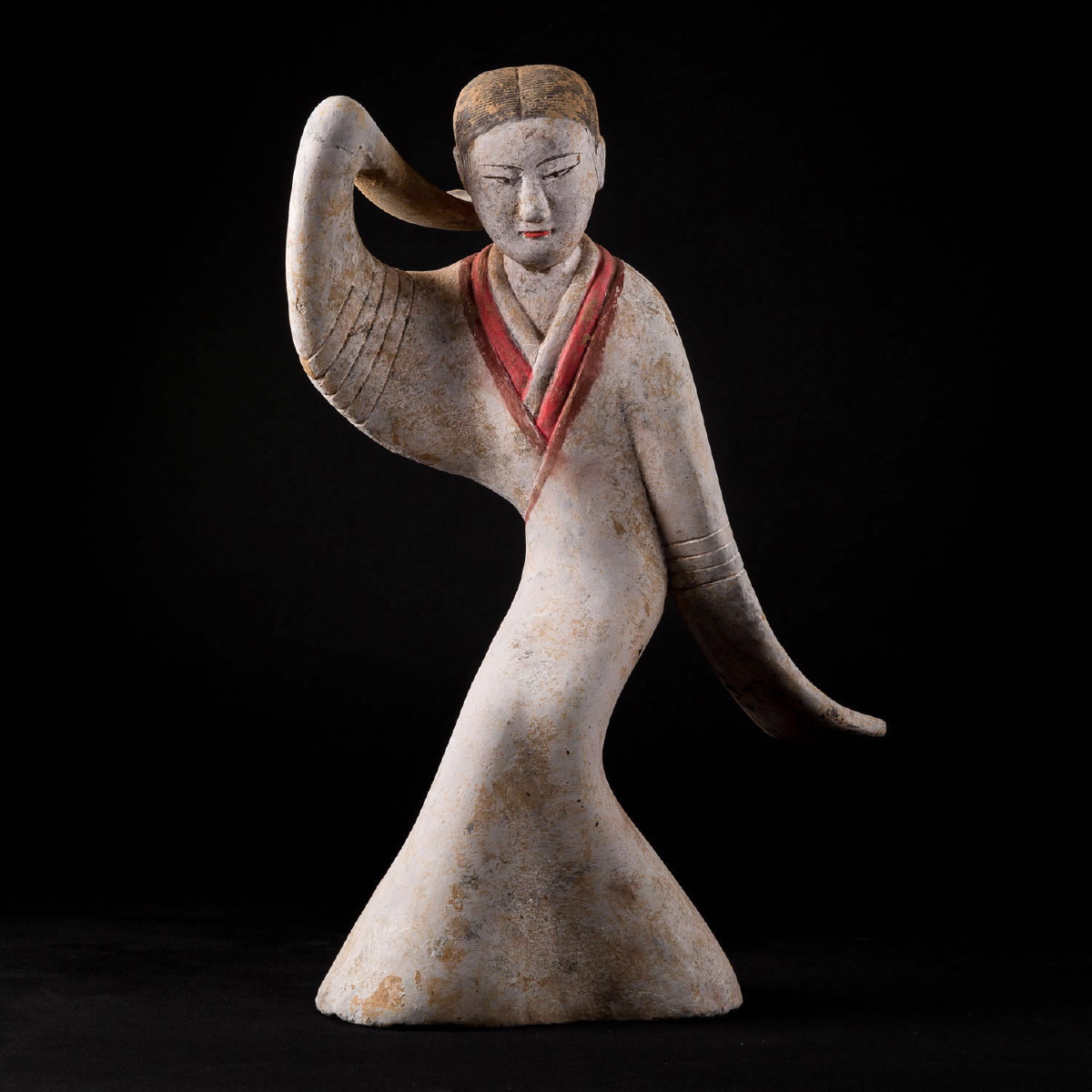 Dancer in dark grey terracotta covered with white slip, some of the details being painted in red and black. Very clean and dynamic movement. Kimono dress composed of three collars and made of a heavy woollen fabric tied around the waist and with the pleats underlined with red. The very long sleeves hiding the hands add to the wide movements of the dancing. The flat head has a knotted hairstyle typical of the period, with a middle parting as a division. The facial features are delicately painted. Excellent preservation overall. Possible ancient repair.

Those modernists who t ell you that beauty is an ything that is pleasing and that everything’s relative would be forced to lie if they were confronted with this statue. No, this statue is not relatively beautiful and it is not permitted to say that if it were different we would like it more. Its movement is extraordinary in its simplicity and vivacity. The size is interesting, the colours well preserved and nothing can surpass the uncluttered and essential dynamic. The very long sleeves contributing to the sweeping and precise movements are part of the dance. The face remains expressive, the features having been drawn with the aid of a very fine brush, which emphasises the eyes and the mouth. The back is perfect, revealing gorgeous pink shoes, which are surprisingly poetic, and the hairstyle, consisting of an elegant chignon, is no less interesting.Dance has always had a strong symbolic dimension in Ancient China. People willingly used it to commemorate military events, mourning or weddings, and under the Han, men were involved as much as women. In this, they were following the teachings of Confucius who strictly forbade contact between men and women in public. Where necessary, ballets were composed of dancers of the same sex. Dance was used as a way to revive universal communication, following the seasons, the rhythms of life and death, and the cycles of the earth and the sky. The long sleeves were used to draw ellipses and circles that were supposed to imitate the perpetual movements of life. Each pause takes a moment, making every single movement the starting point for a new beginning. It is a major masterwork of the Chinese aesthetics.