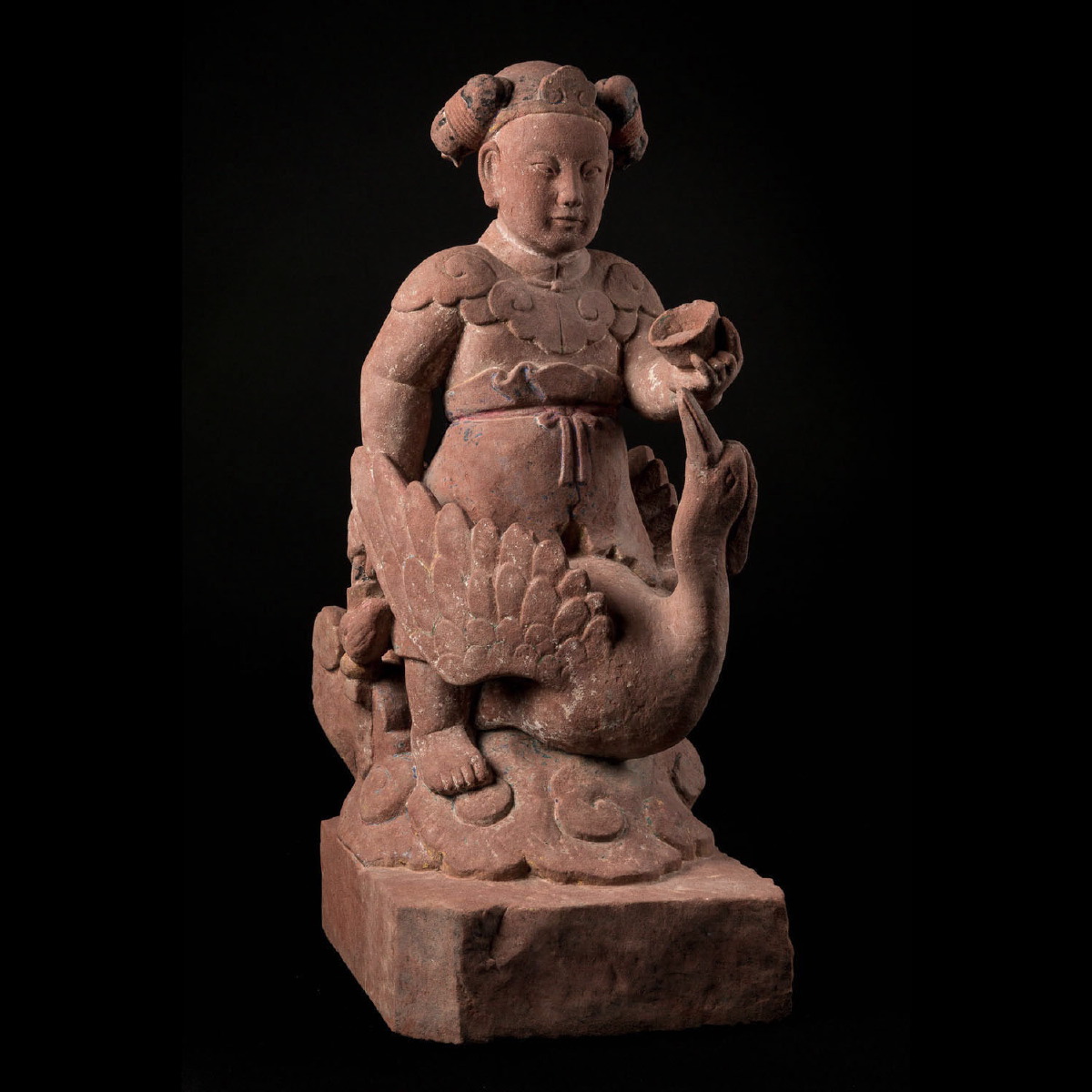 Sculpture in an attractive dark pink sandstone showing traces of an ancient white paint. The goddess has a swan with unfurled wings for a mount. The dress is nicely designed with a large cloud shaped collar typical of the Song period, and she wears a diadem. The depiction is harmonious. A rectangular hollow has been carved in her back, where little prayer scrolls could be placed, according to the Buddhist practice of consecrating statues representing divinities. Excellent state of preservation.

This interesting divinity with a swan is Sarasvatî a goddess from Hindu mythology. She becomes “the goddess of eloquence” in the Chinese Buddhist pantheon where she is the guardian of celestial law. Originally a “river goddess”, she is associated with all things that flow, water, art of writing, music and she is also the patron of poetry. Biancaitian is simultaneously the wife and daughter of Brahmã, having like him a swan for a mount, a symbol of purity and knowledge. The swan means breath, ethereal fire and fluid. Its symbolism is as ancient in India as in Europe and it was brought to China through Buddhism. There it is appreciated as an animal reputedly able to distinguish good from bad. This statue sculpted in an attractive dark pink-coloured sandstone is mounted on a big swan with unfurled wings. Some remains of ancient paint confirm that originally the bird was painted white. The ensemble represents a symbolic depiction in which clouds are omnipresent. The goddess wears a dress with a large cloud-shaped collar and is barefoot, walking on a mound of clouds, represented by curling forms arranged in a pyramid-shaped relief. The Taoism of the Song era would give a great importance to the representation of nature, focusing on the fact that humans are merely a small part of the world. The depiction is slightly stiff, picking up on a habit of Song statuary, although the pose is one of attractive movement, well articulated. The benevolent face is full, the goddess is attired wearing a little diadem and a particular hairstyle made of a skullcap where two buns are placed high on the head. A rectangular hollow has been carved in her back, where little prayer scrolls could be placed according to the Buddhist practice of consecrating statues representing divinities. This is therefore a statue which story tells that it has been worshipped.