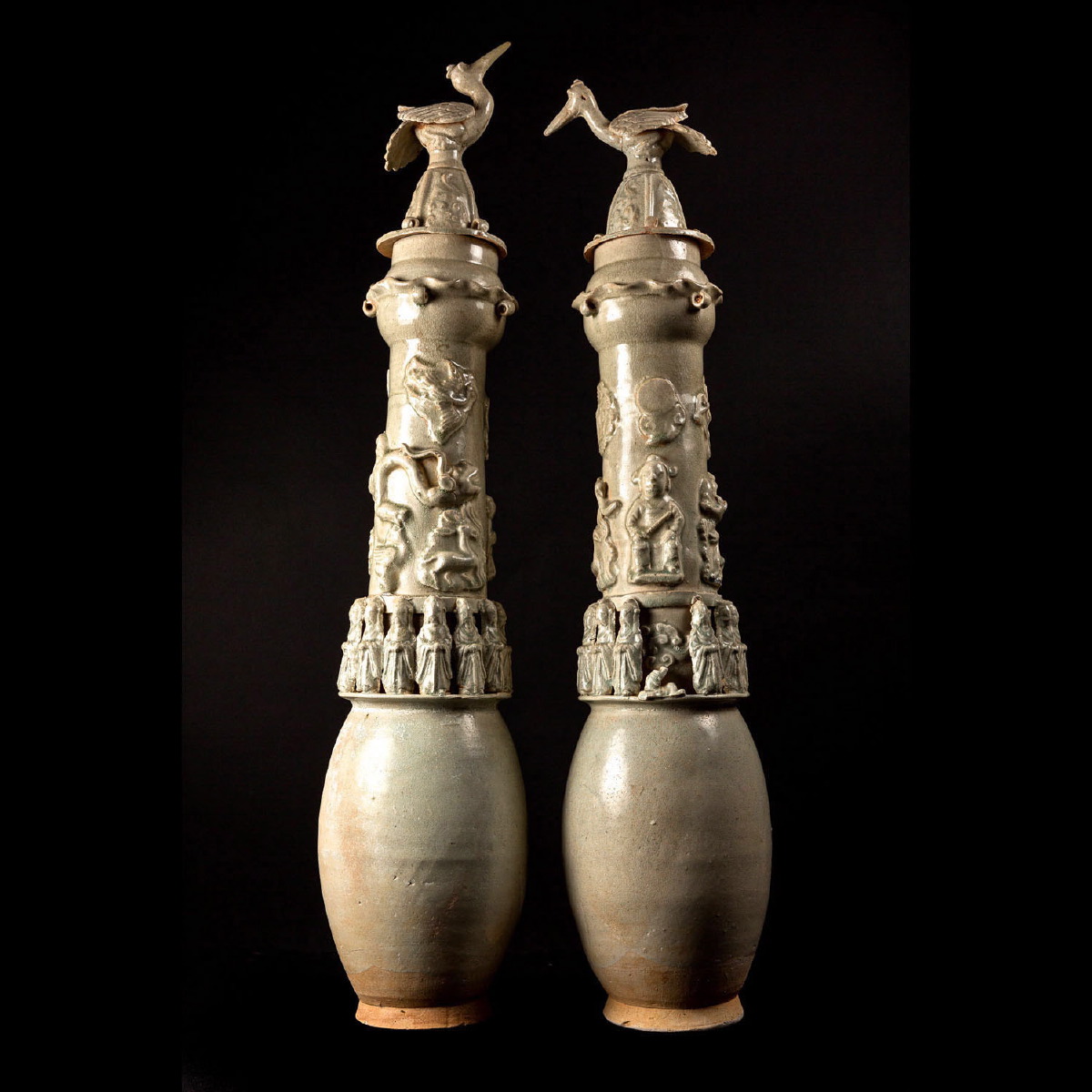 Pair of ritual vases in light-coloured sandstone with a slightly crackled finish called qingbai. The transparent greenish glaze is green due to the presence of iron pigments (typical of celadon), The body, set on a base, is of a cylindrical and slender shape that becomes ovoid at the lower part. The middle part is decorated with human subjects and animals applied in relief, while the lids are decorated with cranes. On the body of the vases, dogs, turtles, birds and 12 Taoist wise men can be seen. The measurements are outstanding, giving a great elegance to this pair of urns. Excellent state of preservation, no visible repair.

This important and tall pair of vases, called Humping, was placed at the entrance of the tombs, taking care to align them on an East- West meridian. For quite a long time, it was thought that these served as urns, but in recent excavations, they have been found with grains instead of ashes inside. Their use was more to offer food to the gods. Their shape is typical: ovoid towards the base, and they are decorated with human figures and animals in relief on the upper part of the body. A dragon is always found coiled around the rather long neck, playing with the pearl of fire. The Chinese dragon is a fantastical creature with the body of a serpent, the scales and tail of a fish, and the eyes of a demon. It is often surrounded by other animals, as here with dogs, tortoises and birds. On the middle part, the twelve hours are represented by a row of twelve Taoist monks in relief. Each vase bears, at its centre, either a male or a female figure in appliqué, probably the owners. As dragons represent the myth of immortality, it is not surprising to find one on a ritual vase. Furthermore, in order to reinforce this symbolism, a crane is perched on each of the covers, embodying the patriarch of winged animals. Since they were said to live for 600 years, cranes were the mounts of the immortals, charged with carrying the souls of the deceased on their backs towards the Western sky. These two urns in hard sandstone have a finish composed of a transparent vitreous coat, with a pale green colour known as celadon. This colour, which would decorate the most beautiful vases of the Song era, owes its name to a character from L’Astrée, a pastoral novel that was being read in Paris around 1625, in which the character called Celadon was a shepherd dressed in pale green. At this time, products from the workshops of Longquan were being discovered by the French and this was the name given to ceramics of this colour. In China they loved this colour: it resembles so much jade!