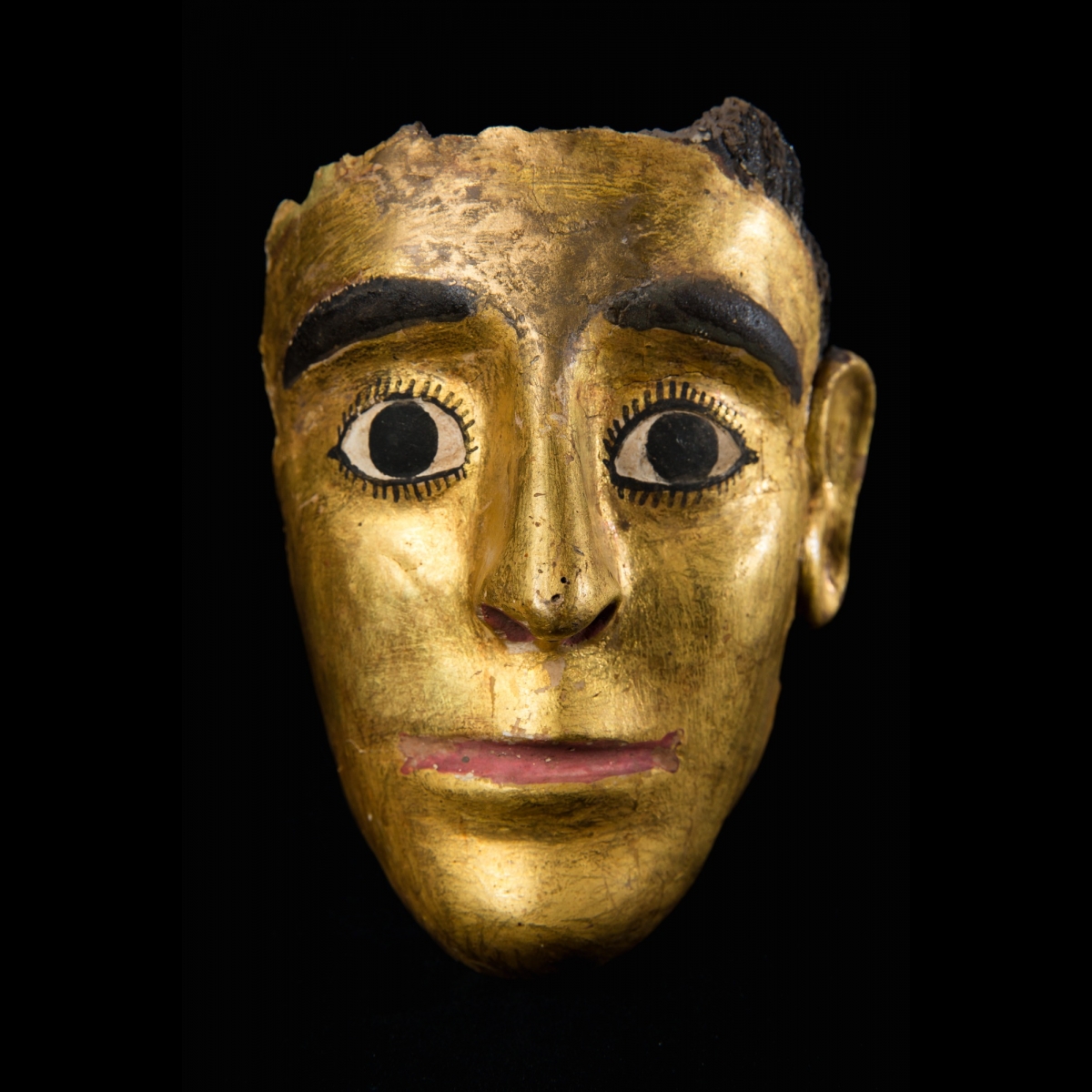 The mask is made of a linen canvas still visible on the back, with a layer of stucco and some gold leaf over it in the manner of the pharaonic cartonnage. The eyes, the mouth and the nose are painted in red and black. Big eyes with a strong strabismus. Some hair belonging to the deceased still visible. The face, with a triangular shape and a prominent chin, is typical of the representations from the Fayoum area. The portrait is treated as a sculpture in the round, and already bears the signs of Roman ritual. The imago was moulded on the face of the deceased and painted by a polinctor, before being adorned with real hair as in this example.

This mask with piercing eyes and its noble aquiline profile must be distinguished from any other one. Most of them have an absent bovine air that largely disadvantages them. Not this one. The Egyptians used to cover certain mummies masks with gold, a tribute to the colour of the gods’ flesh. As a symbol of incorruptibility, and the colour of the sun at its zenith, it represented a never-fading moment belonging to eternity. This inalienable metal was used in the funerary ritual to protect the head for ever: this was of the greatest importance since the head was also the seat of a person’s individuality, a key element in Egyptian philosophy which they tended to highlight during the dangerous transition to the afterlife. This custom would last until the Roman period. If Egyptians sought in this way to celebrate the passage to the next world, the Romans, by contrast, chose to celebrate the earthly life of the deceased. It was customary to display the mask beside the deceased as soon as his death had been pronounced, in order for it to follow him into the tomb, where it was placed on the mummy. For the Romans, these imagines, which were prepared willingly during their lifetime, could also be used for the funeral of another member of the family: in that case, they were removed from their Naos to be part of domestic ceremonies. The mask is made on flax linen still visible on the reverse, which was then stuccoed onto the face of the owner by a specialised polinctor, and finally painted by applying gold leaf, in the traditional method used for pharaohs. Some of the owner’s hair is visible, in order to better personalise the mask. The face has quite a marked triangular shape, which is typical of the Fayum portraits. It is visibly marked by the stylistic characteristics linked to the Roman-era ritual. Watch out, it’s looking at you!