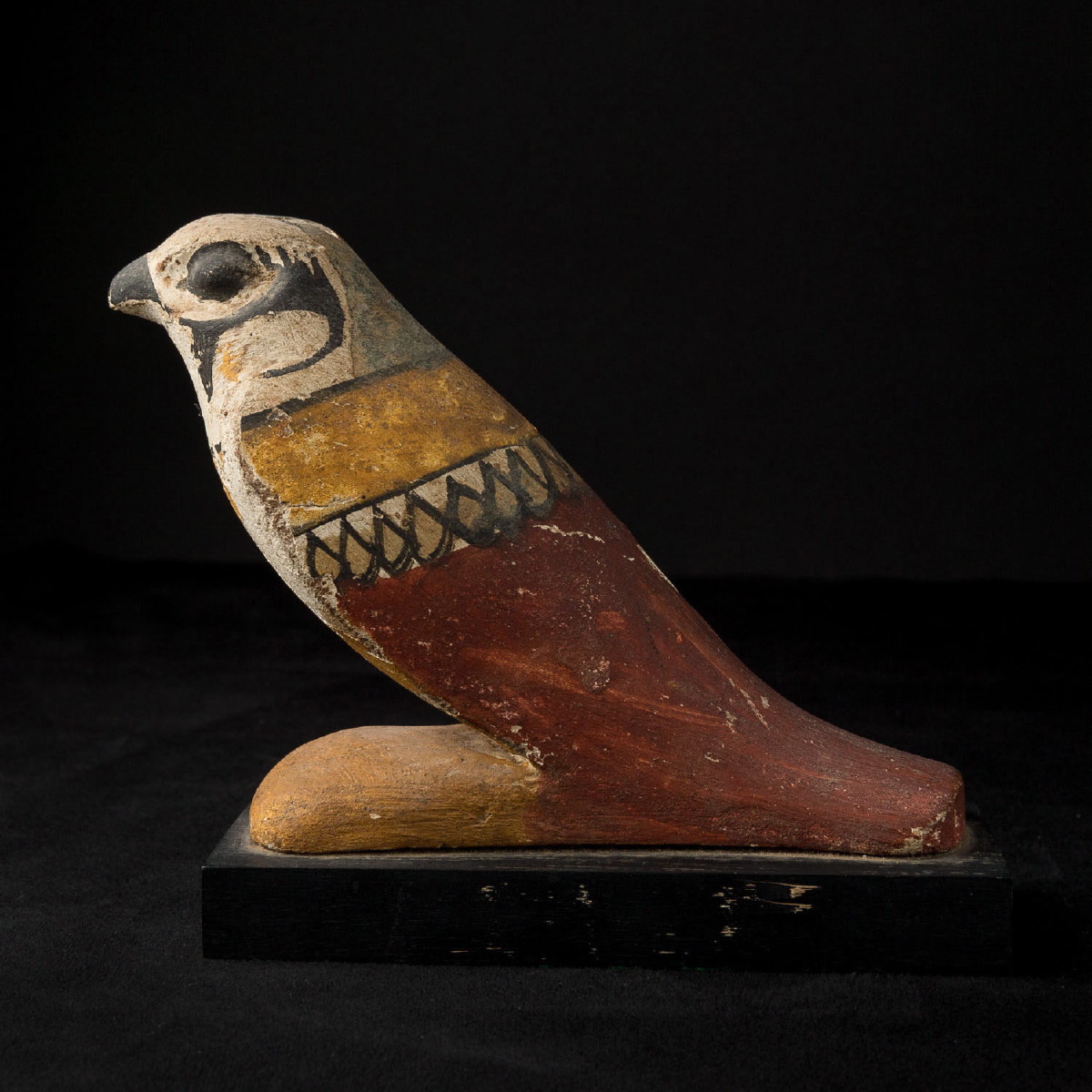 Statuette representing a wooden falcon covered in painted gesso. The animal crouches on its simply shaped legs and is covered with a yellow (colour of the sun) and red (colour of fire and victory) shroud. The gesso is a white coating of calcium sulphate, allowing to unify a surface and help the paint to take. The falcon's head is drawn in black paint with, on the back of the skull, the use of green paint (symbol of regeneration) for the plumage. Very good state of preservation, some fragments of painted gesso missing on the animal's breast.

Lord Belmore was an English aristocrat who launched the fashion for archaeological trips to Egypt. In 1816, forced to escape from bankruptcy, he set off on a great journey on his private boat in the Mediterranen sea. He was a true original, who furnished his splendid property in an exuberant Regency style, and had no qualms about engraving his name on the monuments he visited so as to be remembered by posterity! The Metropolitan Museum of Art in New York is still showing us the proof of this! However, it’s also partly thanks to him that G. Benzoni received the funding he needed for the excavations which he carried out in the Valley of the Kings. Among other places, Lord Belmore spent time in the region of Deir-el-Medineh, called “the village of craftsmen”. There, the god Sokar, who protected metalworkers, was represented by a falcon. This bird, which represents up to thirty gods, is one of the most important animals in Egyptian mythology. Its ability to hover, its piercing, predatory gaze, and the speed of its attack, reaching 350 km/hour in a nosedive, have made it a symbol of the warrior gods: Horus, Hemen and Montu. The first sovereign of Egypt was represented as a human with a falcon’s head, signifying that the king was really one of the incarnations of the god Horus. The word itself, inherited from the god Hor, had already been used to refer to the Pharaoh on the Narmer Palette in 3000 BC, at the time of the unification of Upper and Lower Egypt. The Peregrine Falcon, with its blackringed eye contour, seems to have inspired the design of the Wedjat. Lord Belmore’s heirs yielded most of their collection to the British Museum, thus contributing to the foundation of the Egyptian Antiquities department of this prestigious museum.