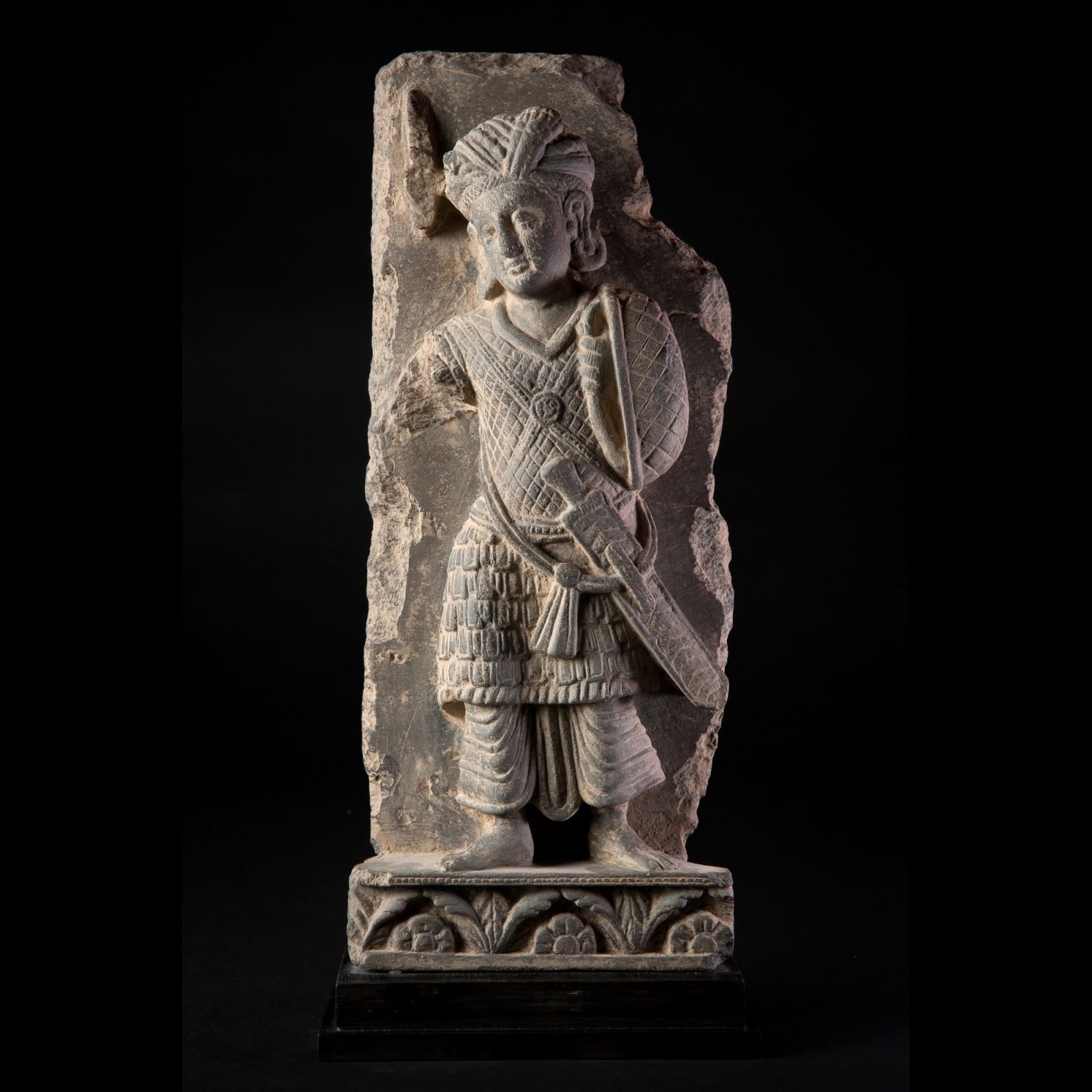 Haut relief of a Kushan warrior in the dark grey schist typical to the valleys of the Gandhara. His uniform, traditional characteristic dress, is made up of pants draped and knotted below a leather skirt, a prominent, short-sleeved tunic and a turban headdress. Adorned with jewellery such as necklaces and earrings, he is armed with a long sword slung over the shoulder with a strop, probably in leather, as well as a shield. A vegetal frieze finely carved with rosettes and acanthus leaves constitutes the base of the relief. No visible repair, good state of preservation: right arm missing. Some scratches due to age.

The Kushans presented themselves as Iranians from Bactria in Central Asia, and were once nomads from the Yuezhi tribe. Kushan is supposed to be the name of one of the five chiefs that led them. A dynasty reigning over a part of northern India, as far as modern-day Pakistan and Afghanistan, they created an eclectic society influenced by input from Greek, Roman, Iranian, Chinese and Indian cultures. They used two languages: Greek and Bactrian. The Kushan Empire was also a point of convergence for the great religions of the era composed of Hinduism, Buddhism and the Greek pantheon. Their kings were fervent devotees of Shiva, claiming to be considered as Indians in their Indian territories. Kushan statuary is usually massive and quite hieratic like this warrior who is in a peaceful, still position. He wears a light wool tunic with long sleeves, because of the mountainous and continental climate, covered by a coat of mail, ending in a skirt consisting of little leather rectangles sewn together. He wears a turban on his head, which was usually shaved, and from his waist hangs a sabre in the Roman style, those from the local region having a curved blade . The convex shield was generally made from rhinoceros hide, known for its resistance and lightness. The bottom of the relief consists of an elegant frieze, finely sculpted with rosettes and acanthus leaves. The arrival of the Sassanids from Persia between 224 and 240 accelerated the disintegration of the empire while they were loosing their supremacy in the Ganges valley in 270. The Kushan period remains an important moment in the art of Gandhâra, and this soldier is a good and well preserved example of this inspiration.