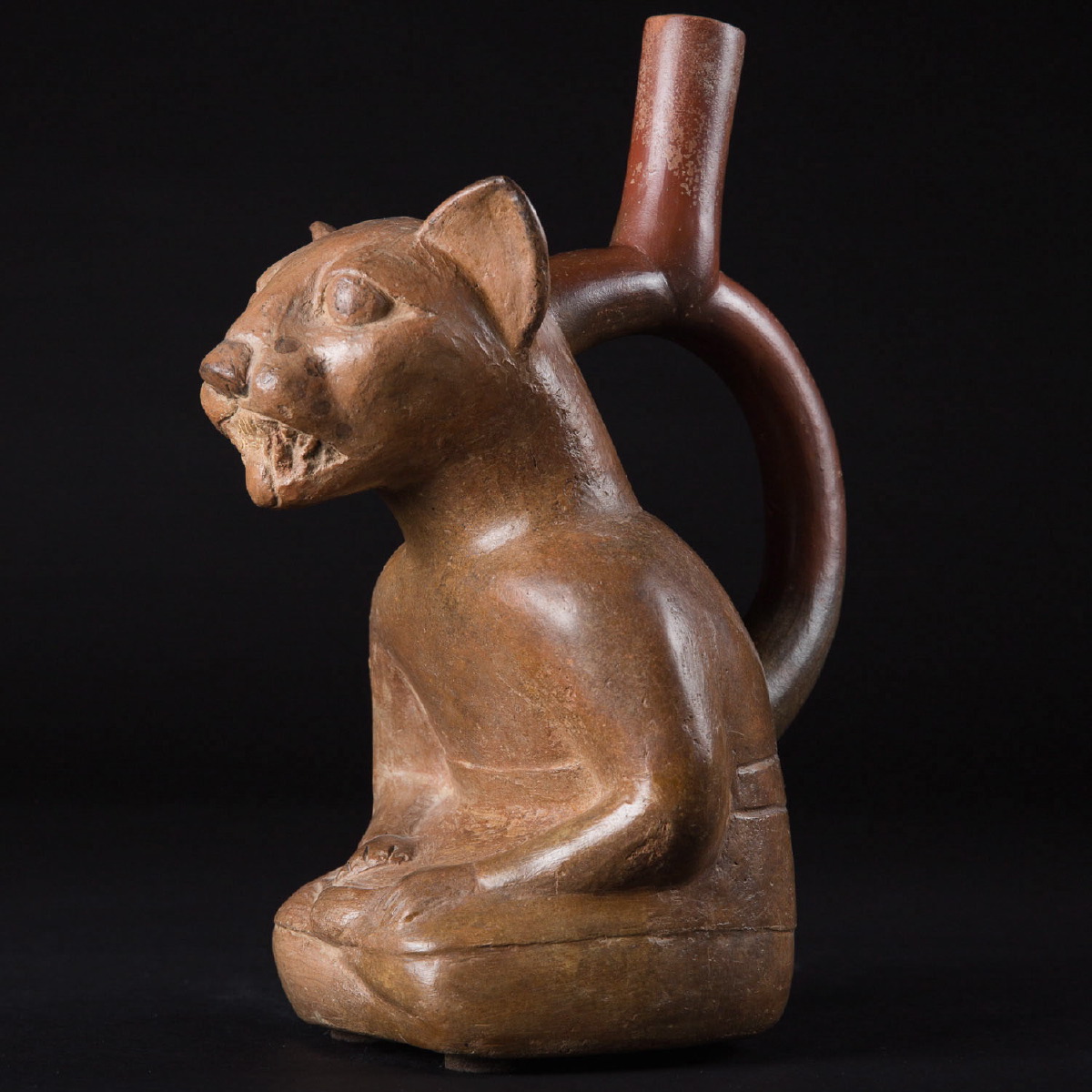 Stirrup vase with a handled bottleneck in molded, fine-grained red terracotta. This piece puts the zoomorphic attributes of the puma with its big ears and pointed teeth onto the body of a man, the knees bent. He holds in his hand a bag containing, most certainly, the hallucinogenic plants or mushrooms used by the shamans. The vase was probably completed by the neck and stirrup handle modeled separately, according to the traditional technique used in Moche pottery. Fed air by ceramic pipes, the open-fire oven gave the terracotta that characteristic varnished red color. The Moche often used a distinctive spout on their vessels, called a stirrup spout. It is composed of a hollow tube of clay bent into an upside-down U shape, with another tube piercing it at the apex of the curve (see images below). This spout form has ancient origins in the Andes, and it seems possible that the Moche deliberately chose this form to echo its use in during the earlier Cupisnique (1500-500 B.C.E.) and Chavín (900-200 B.C.E.) cultures. Excellent state of preservation.

Moche art spread along the northern Peruvian coast, in the coastal oasis and on the foothills of the Andes, from 100 BC to 700 AD. It was an esthetic vocabulary for these people who had no writing, Moche art evolved with very distinct periods (from Mochica I to Mochica V). Frequently found in sepulchers, the stirrup vases or bottles could have been used in ritual ceremonies. The taking of hallucinogenic substances created a particular link between the shaman and the natural elements. The analysis of those vision permitted him to find an answer to the problems encountered by the community. Moche architects and artists raised spectacular adobe platforms and pyramids, and created exquisite ceramics and jewelry. Their art, unlike that of most Andean cultures, is naturalistic and rich in imagery, inviting us to explore their world. In the early 20th century, there was very little scientific excavation in Peru. Many art objects that came into museums and private collections were taken from graves and had no record of their original context. Based on this limited knowledge, scholars thought that the Moche had been a unified state that held sway over a large swath of the north coast, from near the border with modern-day Ecuador in the north to the Huarmey river valley to the south (Huarmey is approximately 180 miles north of the modern capital city of Lima). This conclusion was based on the similarity of ceramic and metal artworks being found throughout the range.

The Southern Moche tended to be expert ceramicists—producing a large amount of fine, thin-walled vessels painted in slip. Moche artists used only three colors—cream, red-brown or red-orange, and black to decorate their ceramics. Many Moche ceramics were made using molds, and so we have many duplicate pieces. The ability to control imagery through the use of molds seems to have been important to the political elites of the Moche.