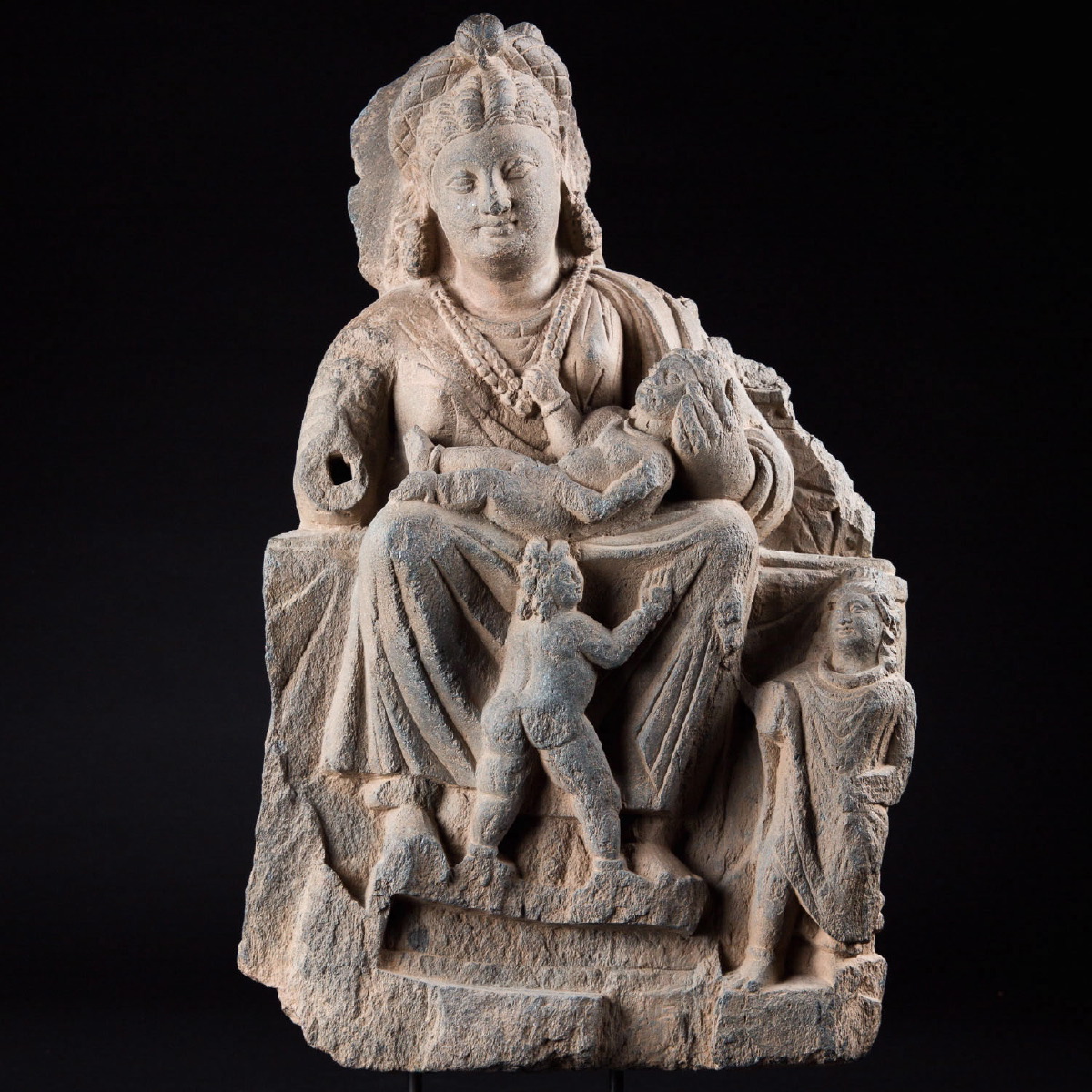 Stele in high relief made of dark grey schist representing Hariti, goddess of fertility and protector of children. Haloed head, adorned with a braided crown decorated with a rosette in the centre and large earrings. Indo-European face with straight nose, low and thick eyebrows, heavy and protruding eyelids. She is seated on a throne decorated with geometric incisions. Represented with several children, one of which is dressed in simple jewellery and lies on her lap. He is playing with the double necklace of precious stones worn by his protector. A second, nude child is standing, holding on to the goddess' gown. The right arm, already at its origins an extra piece, is missing. Dressed in a long, pleated gown and a shawl, she wears a short necklace set with an amulet and bracelets around her wrists and ankles. Another adult figure, masculine and draped, stands to the left of the goddess and in front of the throne. She wears the Ushnisha, a high chignon, symbolizing Buddha's awakening. Excellent state of preservation. Missing parts as visible. No visible repair.

Hariti is a cannibal ogress, originally from Iranian and Bactrian myth, although her worship would spread as far as Northern India. Childless women prayed to her, as did pregnant women hoping for an easy birth. It’s hardly surprising, if we consider that she had no less than five hundred children! Her story is rather beautiful: she was a mother who sought to nourish her children as well as she could, and to this end she ate other women’s children. With the arrival of Buddhism, the faithful began to complain of her misdeeds. Buddha decided to give her a lesson and hid her youngest son beneath his rice bowl. This made Hariti turn mad with anguish and seek her child throughout the universe. Failing to find him, she asked Buddha for help. He then explained to her how much pain she must cause parents by eating their only child, while she had several hundred. Repenting, she converted to Buddhism and decided from that day forth to eat exclusively pomegranates. With the arrival of Buddhism, Hariti transformed herself from an Iranian demon into a protector goddess under Indian influences. It’s possible that this transformation was a strategy adopted by Buddhist monks to counter the Zoroastrianism and animism prevalent in the region. Here the goddess in grey schist is shown haloed, seated on a throne, and surrounded by two plump, naked children, in the style of the putti of Greek origin. Dressed in a long robe of light wool and a shawl, she sits in a position that reinforces her appearance as a fertile matron. Her rounded face with its straight, aquiline nose has Indo-European features: framed by a crown of plaited hair she is adorned with numerous jewels, earrings and necklaces, made of precious stones. The male figure standing on the lower right is draped in a toga and bears the Ushnisha, a high bun on the top of the head symbolising the awakening of the Buddha. This is an excellent collector’s piece about which a research article has been published by Severine Moureau, a former staff member of the gallery who left to work with CRNS - France.