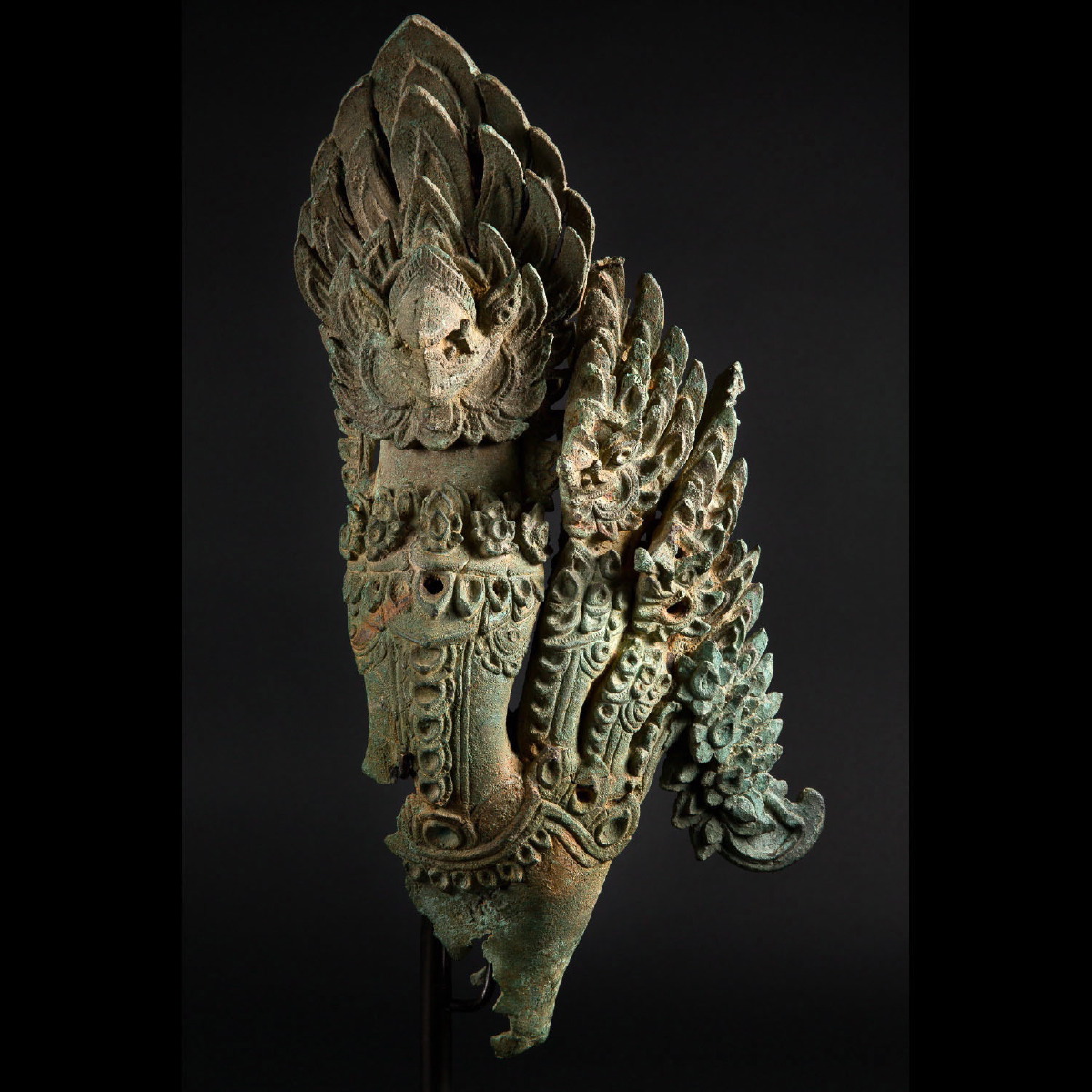 Garuda in bronze showing a nice and old green patina. Can be easily recognized thanks to its magnificent bird’s head covered with three rows of stylized and incised feathers and with a prominent beak. The large neck wears a necklace of flowers. The very bulging chest highlights the impetuous force of this hybrid monster, the well designed waist line revealing a slenderness according to the Khmer aestheticism. The arms are not represented leaving space for two small Garuda appearing from the left hip. The intense complexity of the decoration asking for the use of a high technique confirms the probably sacred or aristocratic provenance of this piece. Khmer bronzes of that size and quality are rare. It might be the element of a ceremonial chariot or a palanquin. Excellent quality of the bronze and nice crusty green patina.

Garuda, meaning eagle in Sanskrit, is a legendary bird, a sort of giant eagle, half-man half-bird, who belongs simultaneously to Hindu and Buddhist mythology. He is the Vahana, the mount of Vishnu the sun god, and the natural enemy of snakes, the Nagâ who populate the land and the water. However, the aerial Garuda and the aquatic Nagâ can also be reconciled in the knowledge that they are the two incarnations of the same divine substance. This large, excellently worked bronze is a decorative element from a ceremonial chariot or a palanquin belonging to an important character or somebody of royal origin. The lively expression of its style, marked with poise and majesty, has distanced itself from the tradition of Hindu depictions to become a perfect example of Khmer art. It is the complexity of the model and its numerous details that raise the impression that this must be an object intended for sacred use. This Garuda, with the triangular head of a bird of prey, a large hooked beak, prominent eyes, and large pointed ears, is crowned with three large rows of feathers, attractively engraved and very stylised. Its wide, strong neck is adorned with a necklace of flowers. The well-rounded chest displays a pectoral necklace revealing the vigorous energy of this hybrid monster, while the waist marked by a belt of worked metal underlines the quest for slenderness particular to the Khmer style. Certain very precise iconographic details, such as the lack of arms, the large-jawed face, and the conical crown resembling Vishnu’s, allow us to date this bronze to the Angkor Wat period, an era between the 11th and 12th centuries.