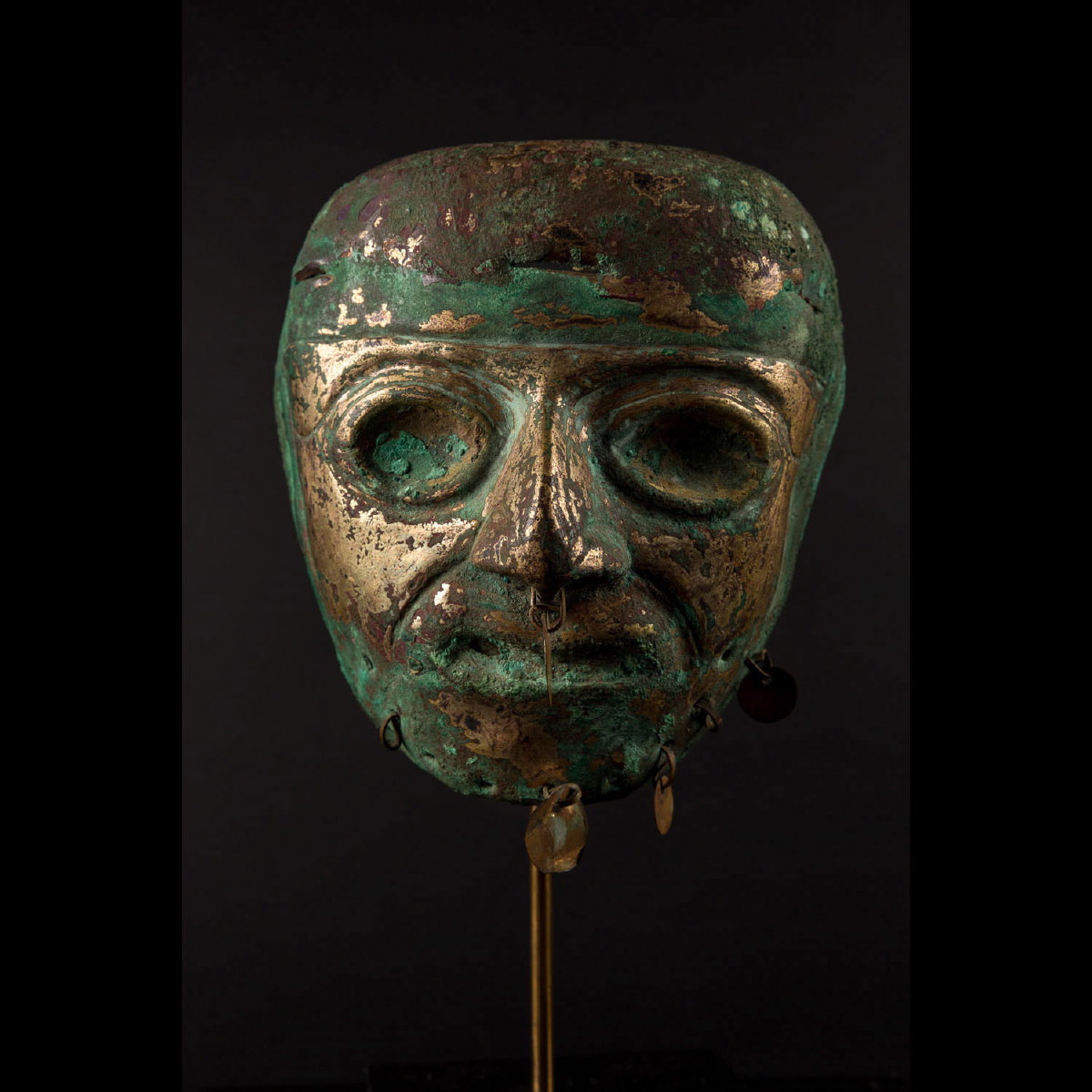 Exhibited at the Musée de Montélimar and published in the catalogue of the exhibition.

This important cult pectoral mask in oxidised copper presents a lovely green colour due to the excellent patina, thick and rich in cuprite. This crusty sort of patina is due to its great age, but also to the presence of saline compounds in the desert soil of Peru. Made from a thick sheet of copper, beaten over a wooden form, this mask is the portrait of a highranking dignitary, and its eyes were once made out of seashell. The Mochica had a very good mastery of metallurgy as they worked not only gold and silver, but also bronze, which they used to make agricultural implements and weapons. It seems incredible that Europeans had to wait until the 18th century to be able to surpass their technique for gilding copper! The flourishing culture of the Mochica, also known as Moche (from the name of their language, Muchik) spread between 100 and 700 along the length of the northern coast of what is now Peru, in the coastal oases and the foothills of the Andes mountain chain. Towards the year 300 it reached as far as modern-day Ecuador, stretching more than 600 km from the coast, and embracing different cultures which it unified little by little, such as the Vicús, the Salinar, and the Virú. It seems that they were finally seen off towards the 8th century by the accumulation of earthquakes coupled with the exorbitant flooding of the Moche River caused by El Niño. These people, who were not familiar with the concept of writing, used their art as a real aesthetic vocabulary, creating over time some very specific cycles of creation. Not long ago, in 1999, a very impressive sepulchre was rediscovered, belonging to the Lord of Ucupe at Huaca del Pueblo. It contained great treasures: lying there were sacrificed llamas, gold and silver vessels, but also diadems and sumptuous jewels. Placed in pairs, similar masks were found in this tomb, one on top of the other on the face of the deceased sovereign, while another mask was fixed to the chest. Found stitched onto a cloth to which hands and feet had been added, their symbol has still not been elucidated.