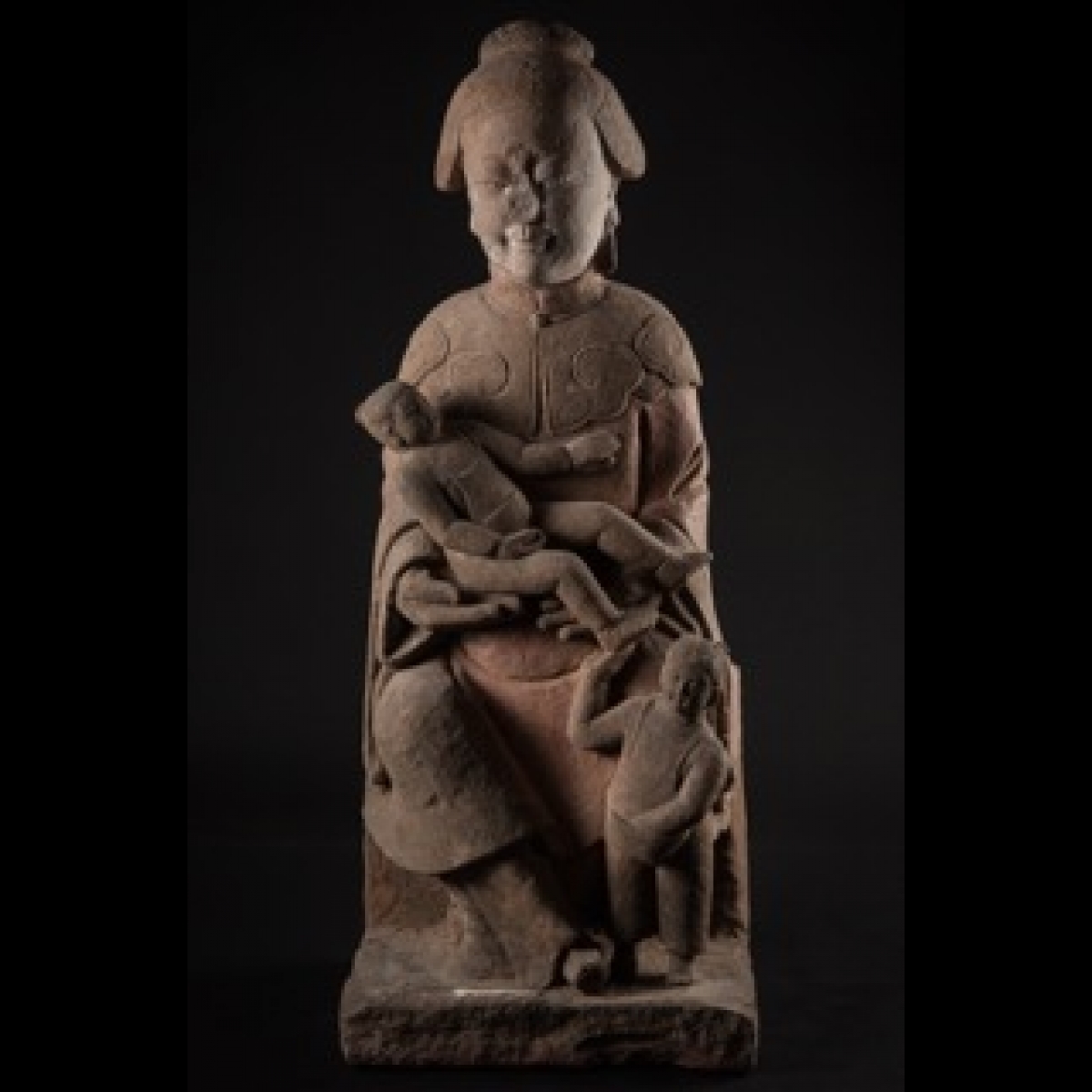 An excellent and very interesting sculpture in pink sandstone, worked in the ronde-bosse method. It represents motherhood, the mother holding in her arms a nude newborn with another, clothed child standing at her feet. The mother's clothing is well drawn, allowing the remains of the red colouring of the clothing and the white of the face to be seen. An elegant collar in the typical design of the Song period as well as the earrings add grace to the ensemble. You will note the small, bound feet, a fashionable tradition starting in the Song era. Very good state of preservation, no missing pieces except for the nose which had once been broken. The polychrome is very visible and the face's features well drawn. It is a piece of great quality, worthy of the best collections, especially since maternities are rare in China.

The iconography of this sculpture is unusual as it shows Guanyin holding a lovely child in her arms, who in turn holds a pearl in its right hand. Another little child stands by her feet. The divinity Guanyin is the incarnation of one of the most eminent bodhisattvas, Avalokiteshvara, who would take on a feminine aspect under the Song. Her name means ‘The one who hears the cries of the world’. The goddess of mercy and the protector of children, but also of demons, fire and the sword, she is often depicted as a woman dressed in white, holding a young child in her arms, because she is also associated with procreation. Inspired by the legend of Miaochan, Guanyin is sometimes shown accompanied by two small children to aid her in her duties. In this example, there is a boy and a young girl shown with a luminous pearl given to her by the dragonking because she had saved one of his children. The goddess Guanyin’s garment is impressively and attractively sculpted, revealing the remains of red polychromy on her clothing and white colouring on her face, which is traditionally the colour of milk. An elegant little collar in the Song style gives the ensemble a feminine, gracious air. The feet are notably small and bound, a tradition which came into fashion from this time. Taoists count this very popular goddess among the immortals, and she is the most popular for Buddhists of the Great Vehicle. The form seen here is classified as one of the seven possible esoterics, and it is this aspect that has caused her to be identified with the European image of the Virgin Mary.