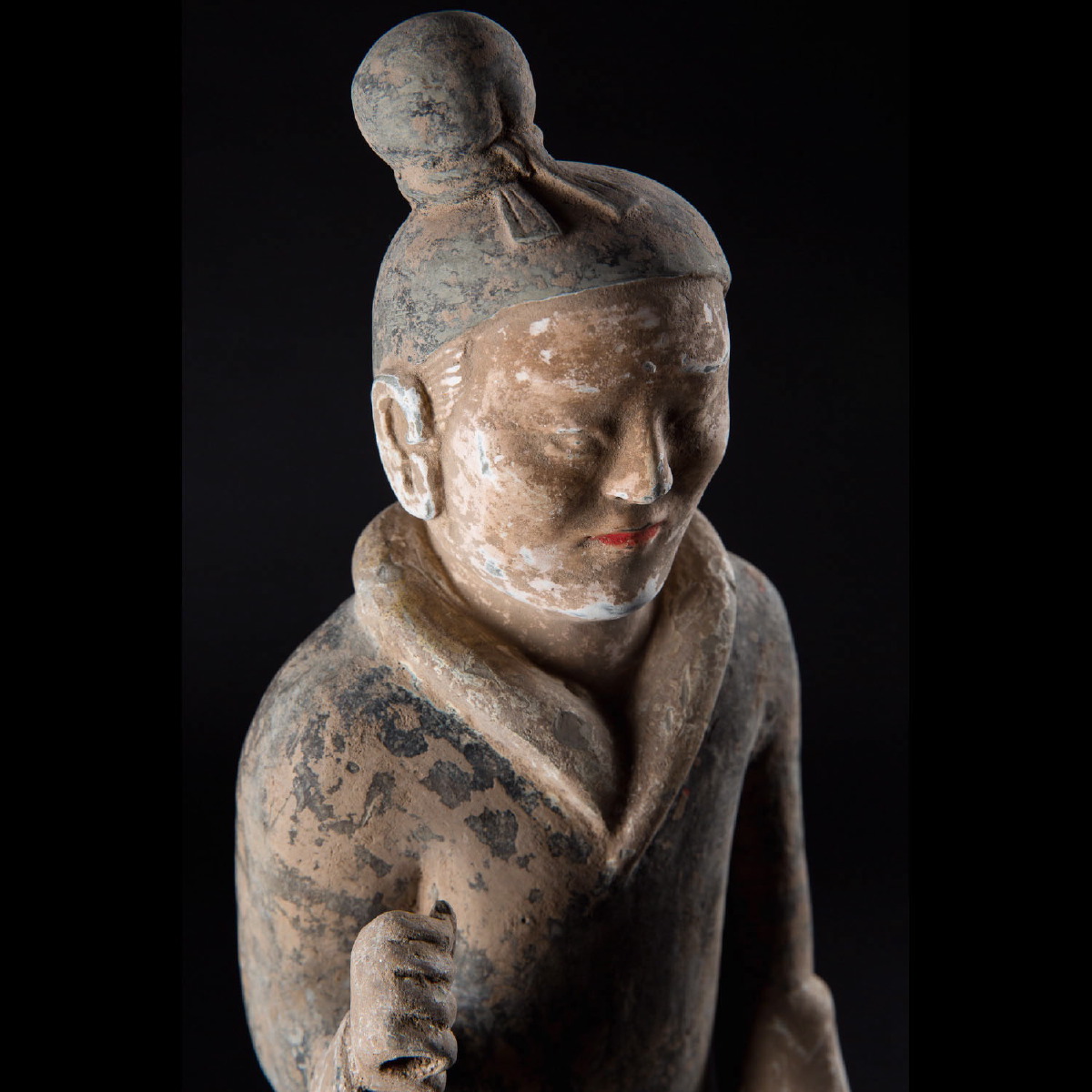 The statue is moulded in a beige terracotta and painted with very well preserved watercolor pigments. The warrior is in a static position and dressed in the typical outfit of the period: a pair of baggy trousers fixed under the knees, a long tunic, puttees worn with sandals often laced up with vegetal fibre. The warrior was probably armed with a lance, today missing.

The Chinese funeral rite has evolved greatly over time. After the Bronze Age Shang dynasty of the 2nd and 1st millennia, in which servants were buried alive with their masters, the arrival of Confucius (551-479) led mentalities to evolve towards a social practice of clemency, with all of society organising itself around values of filial piety. In this spirit, in the Warring States period that followed, the habit of human sacrifices was replaced by the use of wooden and terracotta statues in tombs. The Emperor Qin Shi Huang decided to be buried at Xi’an with a formidable army of life-sized stand-ins, complete with 6000 warriors and horses made of terracotta, the foot soldiers and horses disposed in neat ranks in order of battle. Their discovery constitutes one of the last archaeological treasures of humanity. This soldier belongs to this new ritual custom, but, in conformity with Han statuettes made after the Bing Ma Yong army, it is small in size. Made of grey terracotta and covered with black and white slip, it has some details painted in red. The face has the prominent cheekbones of the Mongols and the round bun worn high on the head is the same as those worn by the soldiers of the Terracotta Army in Xi’an. His foot soldier’s uniform consists of a mid-thigh length black tunic, worn over short trousers, puffed out to make them more practical. Although we can’t distinguish them here, he wears puttees with sandals of woven straw. All things considered, it seems a rather light outfit for someone engaged in warfare. In his right hand, he carried an iron spear, which is now missing. The Han were known to be good metal workers, able to replace the bronze weapons of their ancestors with iron and then steel. Bearing in mind the type of weapons used, the foot soldier was important, and the Han army included a large number of them. It’s therefore not surprising that an aristocrat would have wanted to place them around him to protect his journey to the afterlife.