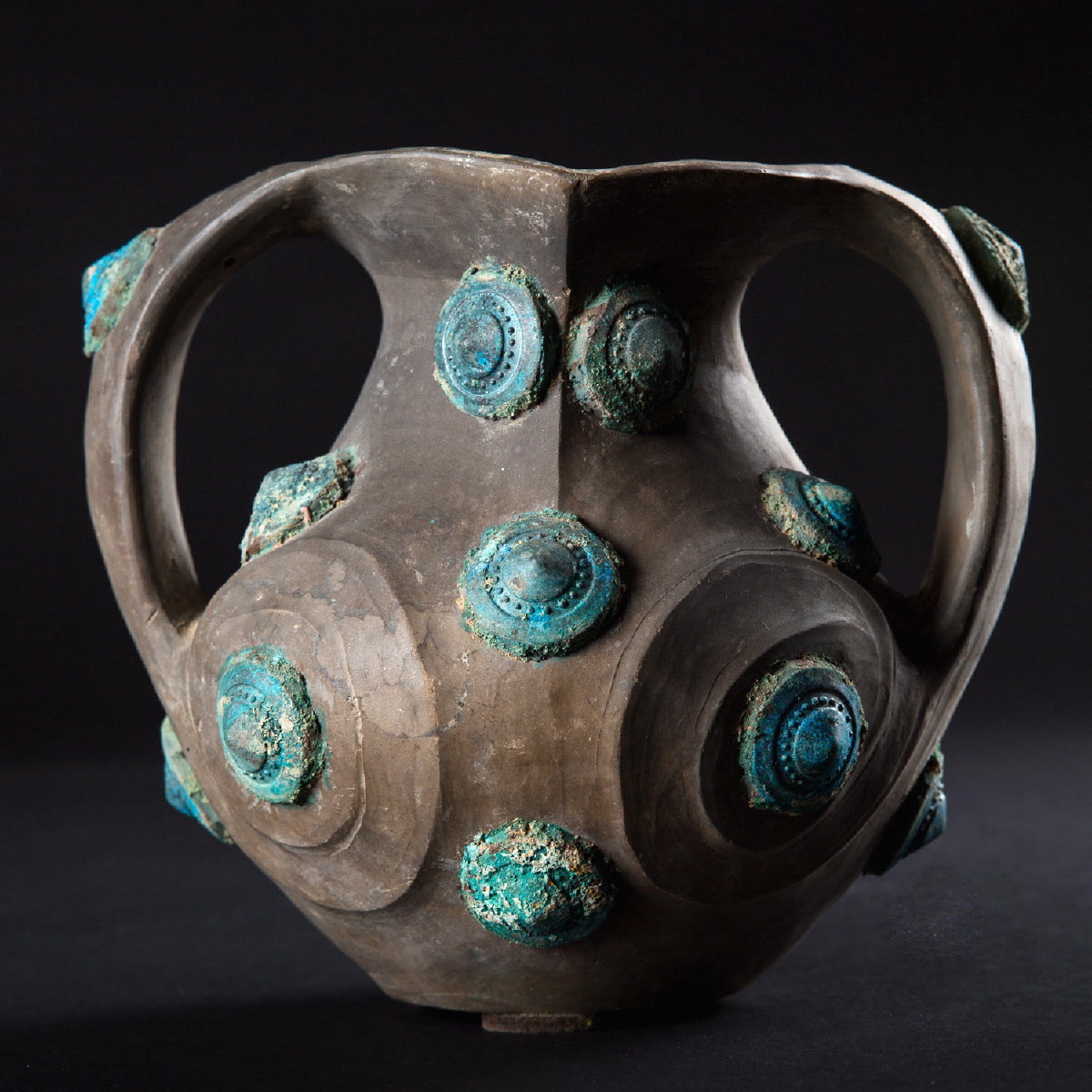 Moulded vase in black terracotta with two large handles, with the presence of symmetric spirals in relief on the body of the vase and an elliptical opened wide mouth. The material of the vase is blackened in the mass thanks to a reduction firing. The reducing of the amount of oxygen entering the kiln at the end of the firing time creates smoke which penetrates deep inside the terra cotta. The black colour of the smoke will determine the colour of the vase. This vase is decorated with a series of bronze medallions of a very nice green and blue colour due to the presence of cuprite and azurite. The piece is perfect, no visible restoration. Beautiful patina on the bronze decorations fixed on the vase.

These Han vases with their singular shape have always had a particular charm for me. Their aesthetic is delightful and their history is so interesting that the British Museum has just put one of these in its collections. They are called gwan vases in reference to that unique shape that has been found to the west of the of the Sichuan province although this form could also have originated from Northwest China. The legacy of a form dating from the Neolithic is evident in these vases. Moreover, similar pieces 5000 years old, coming from the Machang and Xindian cultures, have been found. Other vases, always with the same shape, also date from the Warring States period. Our thermoluminescence test, which places these vases a short time before our Common Era, confirms that this form was used for a very long time. This vase was created based on a form with the neck opening in an elliptical manner but at two points, with each side meeting two large, elegantly spread handles fixed on each side. On each face, two circular motifs end in teat-shaped points or with medallions set on them. Sometimes, as on the smaller vase, metal decorations in relief are arranged in a symmetrical way. The non glossy black surface is the result of a reduction firing in a rarefied atmosphere which allows smoke to penetrate the terracotta. There is in these works a modernity of the aesthetic, contrary to the period’s taste for colour. The beautiful patina of the metal applied on the black background help to create an amazing graphic effect.