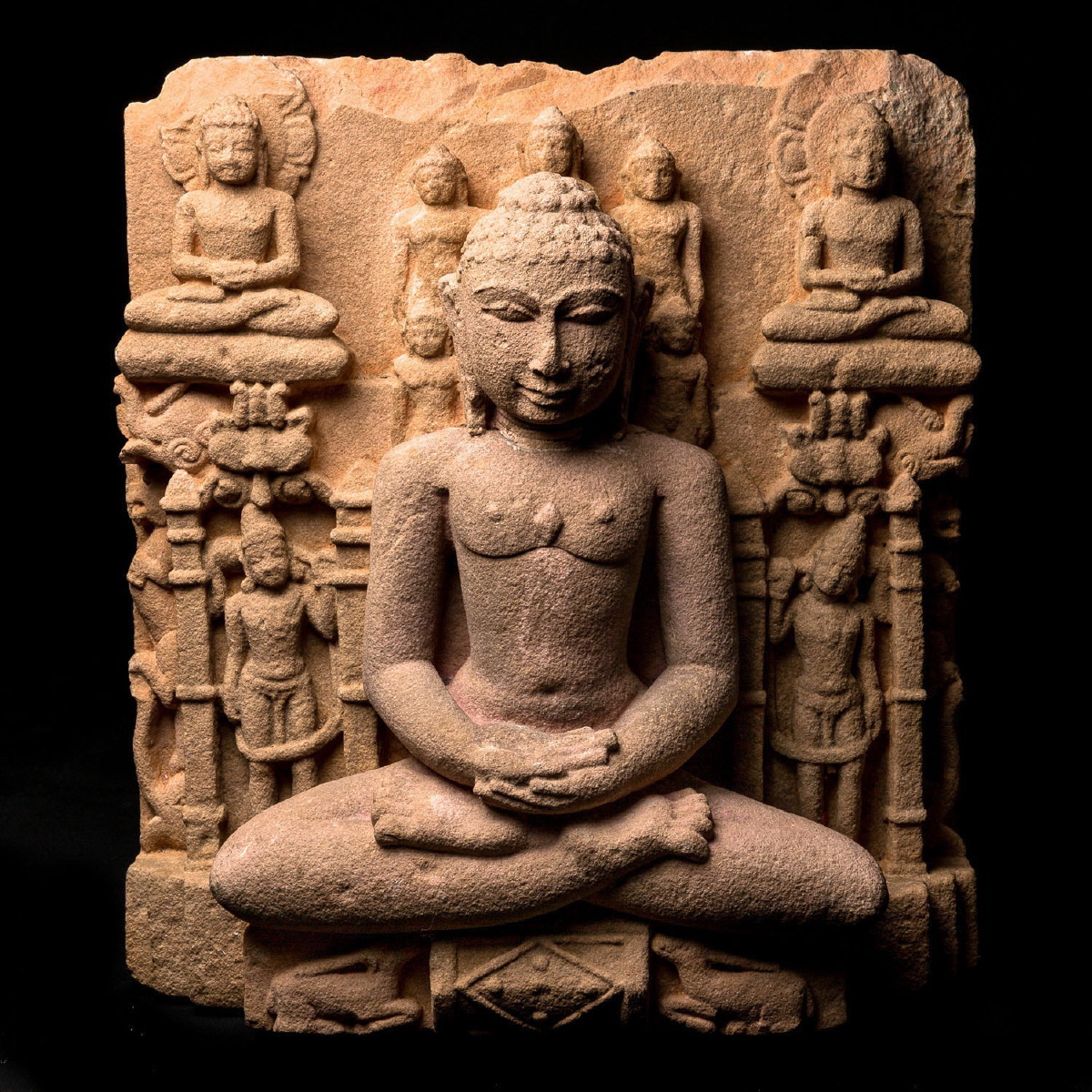 Sculpted pinkish-beige sandstone stele in haut relief. The main figure is an awakened Master or Tirthankara of the Jain tradition, shown seated in the meditation position dhyanamudra. He is surrounded by nine other Jina, either standing or sitting in the Lotus position, two of them bearing the throne. Two pairs of elephant heads as well as a pair of lion heads are positioned on the sides and a pair of antelopes is sculpted at the base of the throne, these being the symbol of Shantinatha. Each of the 24 Tirthankara, meaning “builder of the Lord that leads to deliverance”, is symbolized by both a name, a sign, a colour and an animal. A beautiful piece showing nice ancient traces of erosion. Ancient restoration on the neck.

Jainism, which takes its name from the title “Jina” meaning “vanquisher” in Sanskrit, is one of India’s most ancient religions, whose origins date back to 1000 years BC. It reached its peak in the 6th Century BC thanks to the prophet Mahāvīra, the “Great Hero”, last of the 24 Tirthankaras who are portents of salvation. Born a prince, his destiny was quite similar to that of Buddha. He was highly important in the construction of the Indian identity, comparable to Socrates in Europe, or Confucius in Asia. One of the foundations of this belief is the absolute respect for life; their related asceticism and nonviolence leading to the liberation of souls in Nirvana. To achieve this, they practise meditation and fasting, veganism, yoga, and choose to be naked. Philosophically speaking, this austere and restrictive religion is a kind of ethical materialism with very few followers. This large and rare stele, sculpted in high-relief is made of beige sandstone with ancient traces of pink paint. At its centre, the Enlightened Master responsible for teaching the religion is the 16th Tirthankara, recognisable by the iconography surrounding him. According to tradition, each Tirthankara, “builder of fords in the stream of human suffering,” is symbolised by a name, a sign, a colour, and an animal. The pair of antelopes sculpted on the base of the throne serve to identify the central figure. This Shântinâtha, sitting in the position known as dhyanamudra, is one of the five most venerated Jinas. He is surrounded by four small standing Jinas, while two others, sitting meditating in the lotus position, with haloes, are placed in the upper corners. Two assistants dressed in dhotis, each standing between two columns, carry the throne. Two pairs of elephant heads and a pair of lion heads are placed on the sides. This stele expresses a perfect symmetry, giving the sense of an extremely well organised world where everything fits together in harmony. There is a pleasant visual contrast between the serene meditation of the central figure, and the lively background teeming with characters and animals.