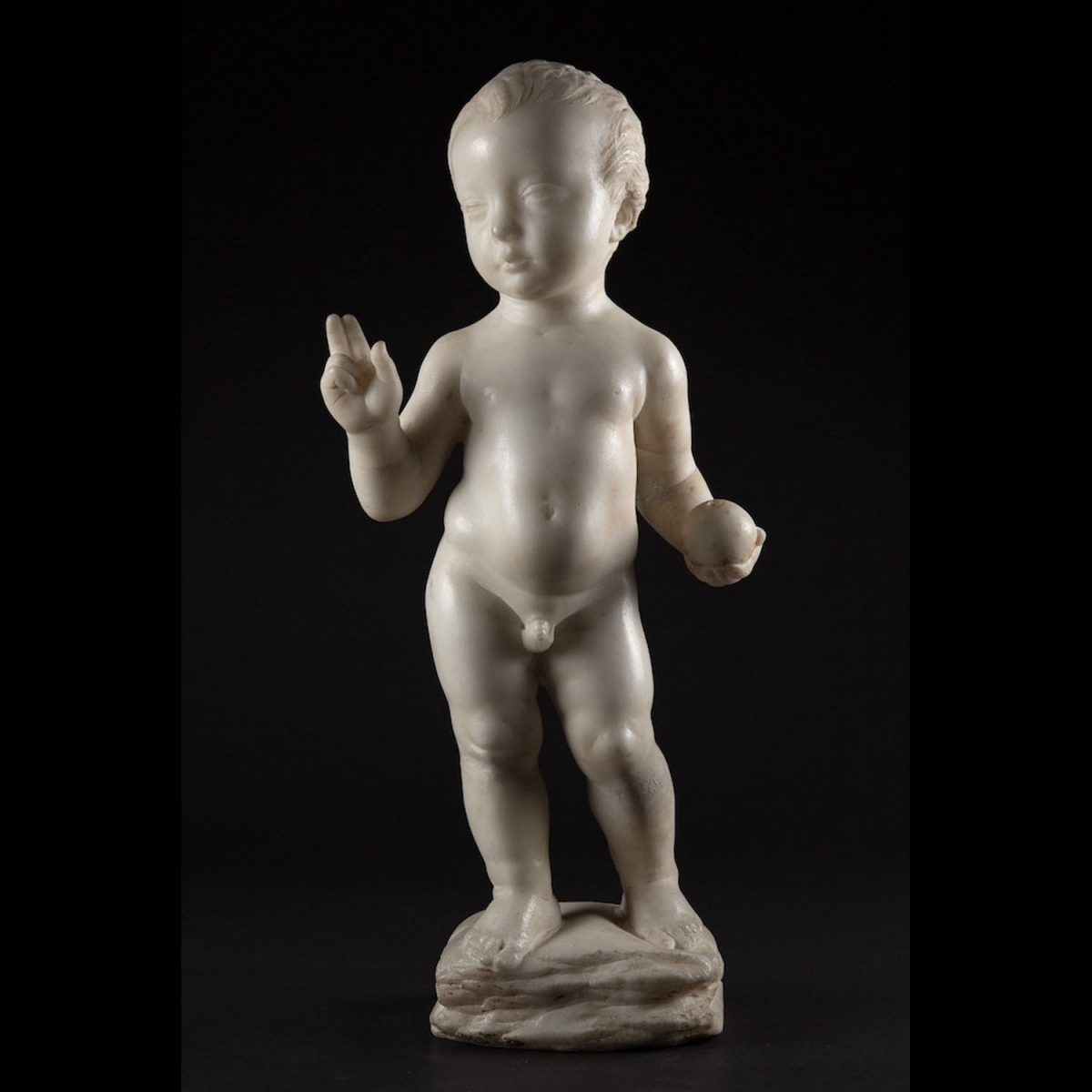 White shiny marble statue of the infant Jesus in the round, nude and plump, standing upright on a cushion. Head slightly turned to the right, holding a globe in his left hand and making the sign of blessing with his right hand. Good overall condition, some small scratches at the base, a restoration of the right hand, re-gluing at the left elbow and at the knees. (cleaning and some repair in 1960 probably under the supervision of the Cleveland museum). Marks on two spots: the one on the head could be meant to fix a halo and the other on the globe probably for a cross. Presence on the back of traces of an old fixing element. Sculpture numbered in red paint: 42 779 (acquisition number of the Cleveland Museum of Art)

This statue from the Renaissance, a period that saw a return to Ancient Greek and Roman models, recalls the style of the antique putti. Infant Jesus symbolizes the nativity and the earthly globe and his domination over the world of whom he is the Savior. A friend of Michelangelo, Baccio da Montelupo (1469-1523) is one of the great sculptors of this period; his works decorate churches in several cities in central Italy, such as Santa Maria Maggiore di Tivoli and San Martino in Galgalandi. This sculpture ornamented the top of the tabernacle of the eucharist of the Sacrament in the San Lorenzo Basilica in Florence until 1868. It replaced the damaged initial work by the Florentine sculptor Desiderio da Settignano. The church then sold it to The Grand Duchess Marie, wife of Nicolas II while she was living in Firenze. She used to visit antic shops and churches to buy ancient pieces of art accompagnied by Baron von Liphart. The Infant Jesus was located by the Grande Duchesse in “Villa Quarto” that was sold immediately after her death. In this occasion it is said that her oldest daughter Countess Helène Stroganov gave this statue to the Baron Karl Eduard von Liphart a great German collector. At the start of the 20th century, it was acquired by John L. Severance, American manufacturer and philanthropist, president of Cleveland Museum of Art, to later bequeath to this museum in 1936.