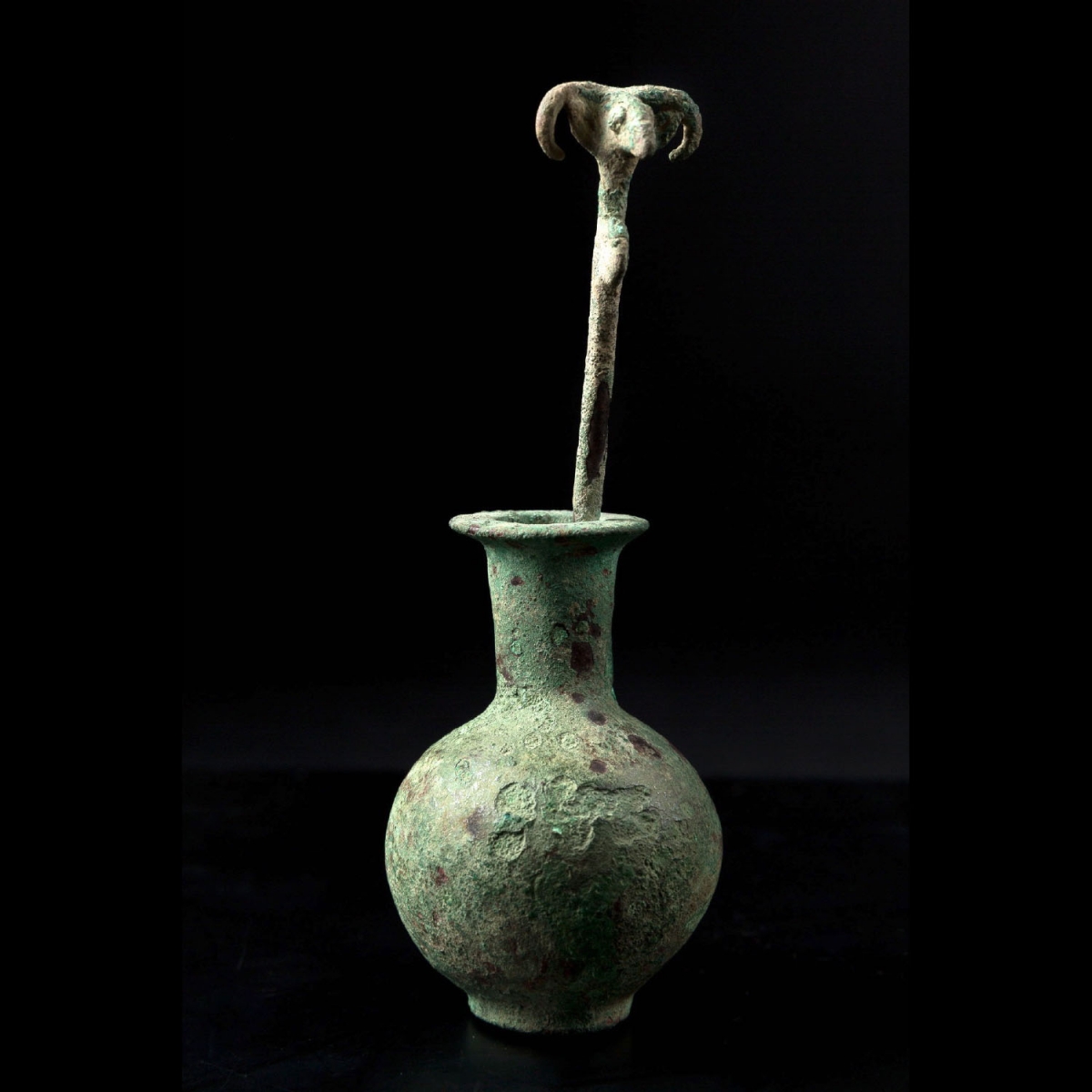 Very nice and interesting vase for containing ointments or make-up powder. Bronze with good heavy green patina. Globular pot with high narrow neck, flat lips slightly opened. Still contains its small spoon with an Aries head, the horn nicely designed in the flat. Old patinated bronze on a slightly oxidised base dating from the first millennium BC. Ancient bronzes from Luristan contain between 6 and 10 % of tin and need to reach 1000 degrees Celsius to reach the fusion point.

3000 years ago these two kohl vases in bronze from Luristan were part of the everyday feminine beauty. One of them still holds its spoon, the handle decorated with an ibex head, while the other one, elongated and with the body like a little tapir, is quite amusing. Kohl, is a mineral powder used as makeup, but also as a medicine since the most ancient times. Its black or dark grey colour (Kohl meaning black in Arabic) is due to a mixture of lead, galena and sulphur, all bound together either with animal fat, olive oil or even bitumen. We don’t know how the Egyptians invented 4000 years ago such a mixture with antibiotic properties. In fact, it is the toxicity of lead which transforms it as a biocide. The Greco-Roman manuscripts of Dioscorides discuss this custom of using kohl as a collyrium, although it may have served to protect the eyes from the intense rays of the sun. Ancient iconography shows the kings and queens of Egypt with large eyes underlined with black, causing this habit to be associated with membership of the Egyptian nobility. In fact, this was not the case, as it has been discovered that this fashion was widely common amongst men as much as women and even children. It is also plausible that they thought that applying eye makeup in this way, by drawing the Wadjet on oneself, could provide protection from the god Horus. It has to be considered that the needs of ancient medicine created the fashion still in use today. Thereafter the Egyptians, as well as all of the people from the Middle East, Berbers, Arabs and Persians liked to see their large dark eyes adorned with it. It is applied to the inner rim of the eyelid using a stick or a very thin spoon. Those ornamented with animals, like the ram of this vase, are part of the stylistic index of ancient Persia. Such humoristic representations like the small tapir are very much sought after by fervent collectors.