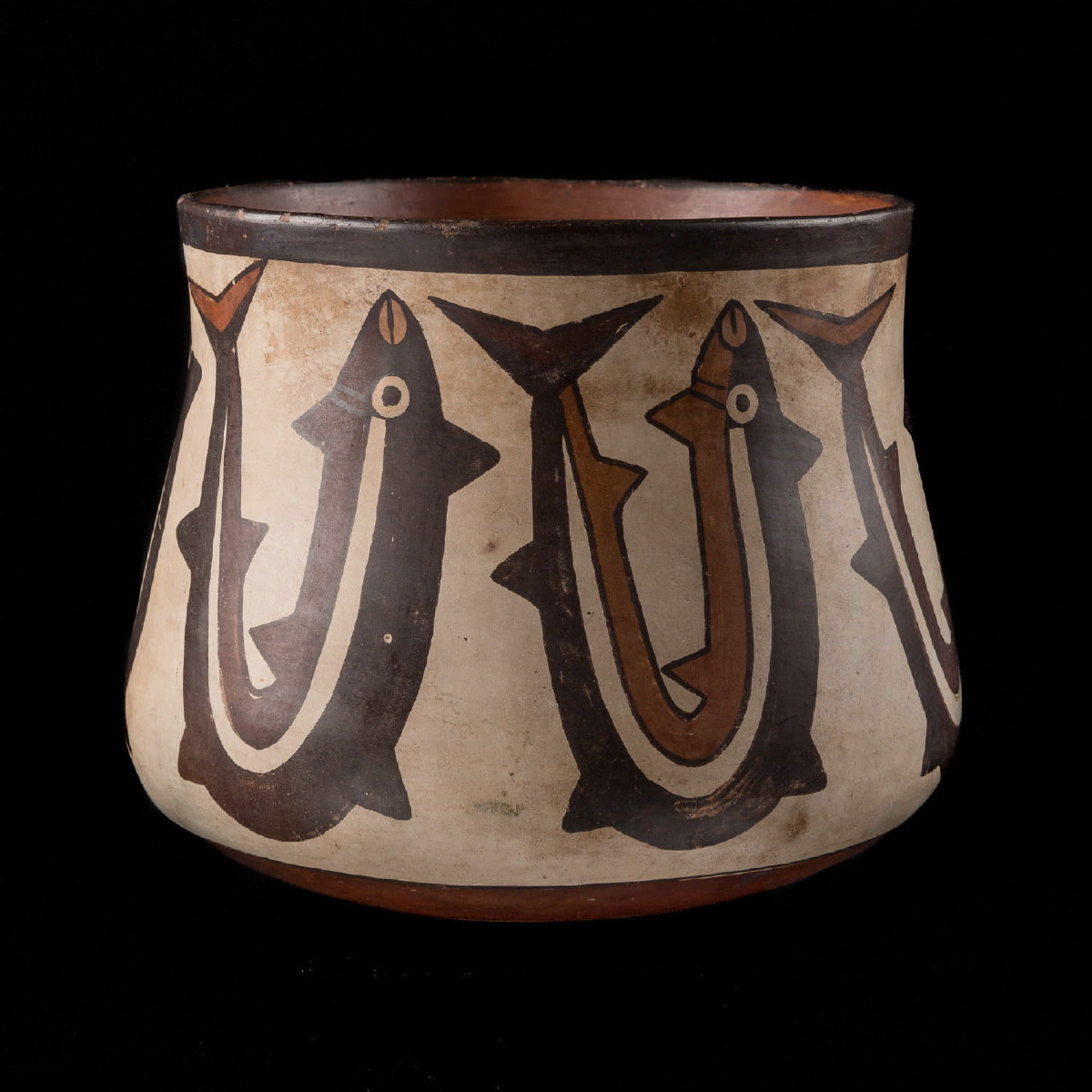 Vase in fine orangey terracotta. Dark red paint covers the interior and a band of brown surrounds the outer neck. The polychromatic detail was fired to produce a satiny finish. Around the vase six fishes, probably sharks, are painted in orange and dark brownish red. The features are outlined in black, typical of the Nazca design. The ivory background corresponds to the Nazca B period. Very good condition, no restorations. Two small chips on the upper edge of the neck.

The Nazca culture was born in the South of Peru along the Andes. Developing between AD 100 and 600, with the Mochica it incorporated the pre-Inca culture. Although these people are known above all for the immense geoglyphs they drew straight onto the desert floor, notably in la Pampa de Ingenio, they nevertheless created some very interesting ceramics. Excellent potters, they modelled vessels and vases of all kinds, painted with figurative motifs coloured with mineral pigments in more than twelve different shades. These were used for funeral rites in the large necropolises in which they have been rediscovered. Among the latter, the ceremonial centre of Cahuachi, comprising forty pyramids, was used above all for human sacrifices. They had no hesitation about cutting the heads off their enemies, and men’s skulls have been found with a hole in the forehead providing an orifice through which a cord was passed, allowing them to be hung up. This vase and bowl are made of orangey terracotta and covered in a slip, dark red on the inside of the vase and the dish, and brown on the exterior. The fish, or rather sharks, are painted in orange and white with their features underlined in black, following the distinctive Nazca style. The ivory background makes it possible to situate these potteries in the Nazca phase B, the beginning of a period that is still rich with the naturalist heritage of the Paracas. The technical quality of these pieces really brings out the stylized motif of the sharks, which probably constituted a symbolic reference. The Nazca were peasants from the narrow valleys of the tributaries of the Rio Grande de Nazca, who developed a system of irrigation to make up for the dryness of the local climate still in use today. We know, however, that they were also fishermen who used nets. These high-quality ceramics have a true elegance. The simplicity of the motif combined with a skilful use of colour make them fine pieces for decoration.