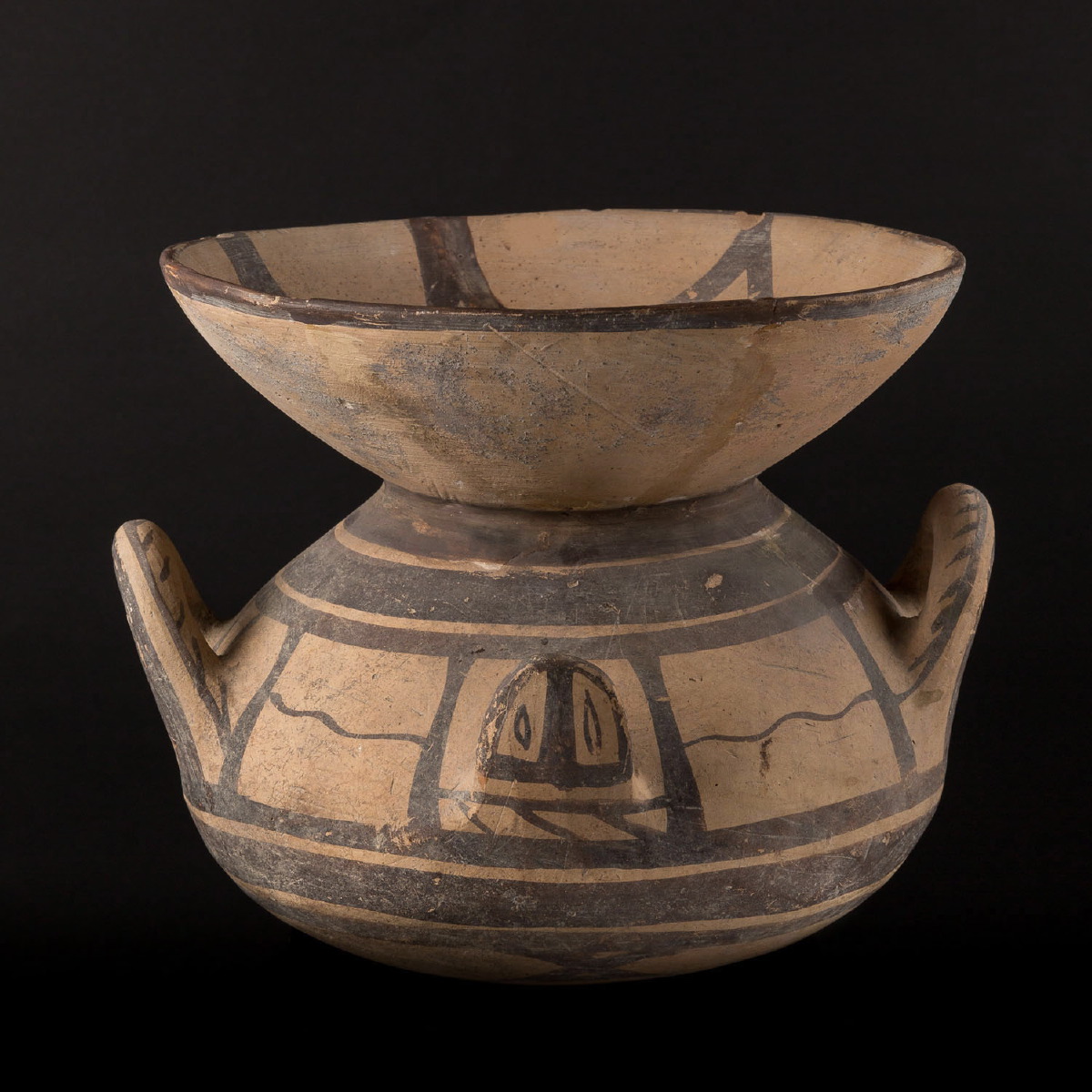 Messapian style vase in beige ceramic with a large globular belly and large flared mouth. This vase called Olla has two arch-shaped handles on either side of the body that are in alignment with two ovel-shaped projections. The painted decor is brown and includes curved lines located on the inside of the collar and linear lines on the outside of the body. When using pure clay, the slow turn method would be employed in the creation of ceramics. Scratches and small imperfections due to age. Ancient restoration on the neck.

Apulia encompasses different civilizations whose ceramics were of great diversity. One of these regions, Daunia, which saw the development of the Lapyges culture, was born of an amalgamation of an Illyrian population, Mycenaean refugees and autochthones. It gave birth to three populations of reputedly talented potters believed to have had very similar artistic styles: the Daunians in the north, the Peucetii in the centre and the Messapians in the south. They lived in the Apulian region, particularly in Salento. They invented works with quite unique forms, as we see here, made of refined clay that they worked on a slow wheel. From the 7th century up to the first half of the 3rd century BC, we see appearing in the Messapian style well-stylised designs. Around the 6th or 5th century, these populations adopted a mixed style in which geometric elements combined, little by little, with animal or human figures. Later, they would prefer designs of a vegetal sort with less bright colours. These vases, made of fine-grained beige ceramic, always have globular bodies with particularly wide and flared cone-shaped mouth, giving them the name Olla. They all have two arch-shaped handles on each side of the body and, aligned at quarter-turns, two rectangular projections of which the most beautiful examples are decorated with symbolic animals. Sometimes covered in a white slip, their decoration is painted exclusively in a reddish-brown colour, consisting of curved lines, thicker bands, friezes of vine leaves and olive branches. These cult objects have been an important source of information for understanding these cultures, which lacked a written language, and the highly decorative character of these potteries make them a favoured object among collectors.