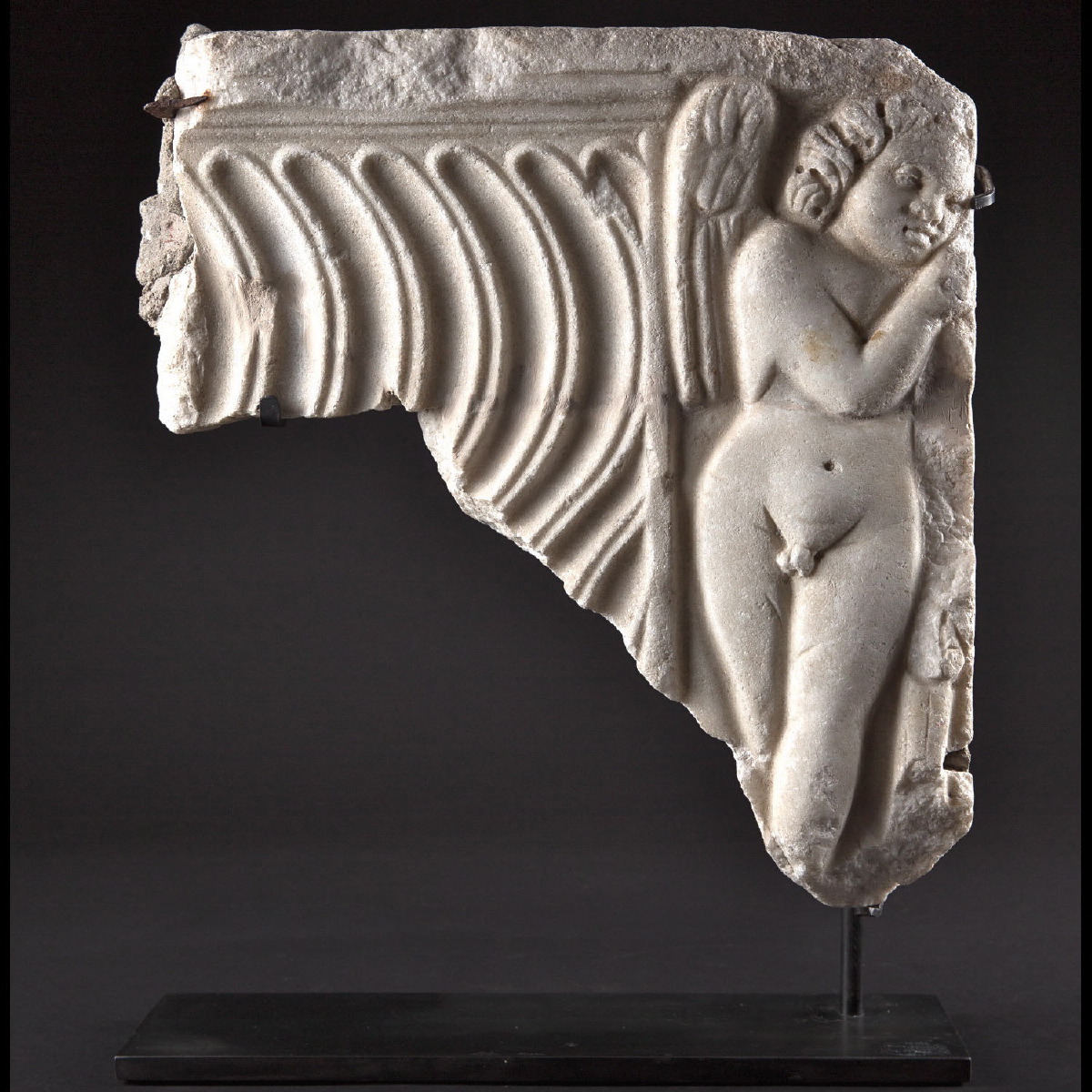 A slab of marble, sculpted in bas-relief with a standing Cupid looking like a winged putto. White marble of good quality with clear signs of erosion due to age. Cupid is looking towards the right, nude with nicely detailed curled hair. He is portrayed, like during the Hellenistic period, as a chubby child also called putto for ''little man''. A repeated design of curls marks the beginning of the sarcophagus' frieze. On the back, clear signs of a former wall-mounting device. With chisel traces, regular and very old. Marble with a nice smooth finish. Presence of an horizontal ancient patching. We have here a fragment with missing parts. A restoration has been made sticking together two pieces.

Since the Hellenistic era, Eros, the god of love, is represented as a cherub or as in the Baroque era like a putto, meaning ‘little man’. The Romans chose to call him Cupid, in accordance with their custom of renaming the gods linked to their Greek heritage, but they kept his attributes as a divinity of love and passion. Son of the goddess Venus, he is her iconographic companion in the incarnation of desire. Venus ordered her son Cupid to make Psyche, of whom she was jalous, fall in love with the ugliest man in existence. However, it was with her that Cupid fell in love for eternity, even begetting a daughter called Voluptas. Hesiod tells us that Eros, in his aspect as a winged divinity representing desire, is a bisexual deity whose wings are covered with gold. Classical mythology would make him one of the primordial gods, protector of homosexual love between men, a reason why many of his statues were placed in gymnasia. Bearing this in mind, in this example we can note the sculpted, curving lines inherited from the strigil, an implement used to scrape off the oil with which the body was coated for sports and wrestling. In antiquity, sarcophagi were rectangular tombs covered with a lid, into which were placed the bodies of those who had asked not to be cremated. Examples have been found in stone, terracotta, lead, wood, and even in glass, but the most ancient known Roman sarcophagus is in peperino, belonging to Scipio Barbatus (250 BC), today at the Vatican Museums. It is from the Imperial epoch onwards, particularly from the reign of Antoninus, that the sarcophagus in relief enters into common usage. It is important to remember that in Greek, sarcophagus means ‘fleshdevouring’, because at the time they also used a particular porous and volcanic stone from Assos. Pliny the Elder describes how it allowed the body to decompose within forty days. This beautiful remnant of a Roman sarcophagus in marble participates to the Roman taste for putting bas-reliefs on funerary monuments, some of them like this example, still lively and charming.