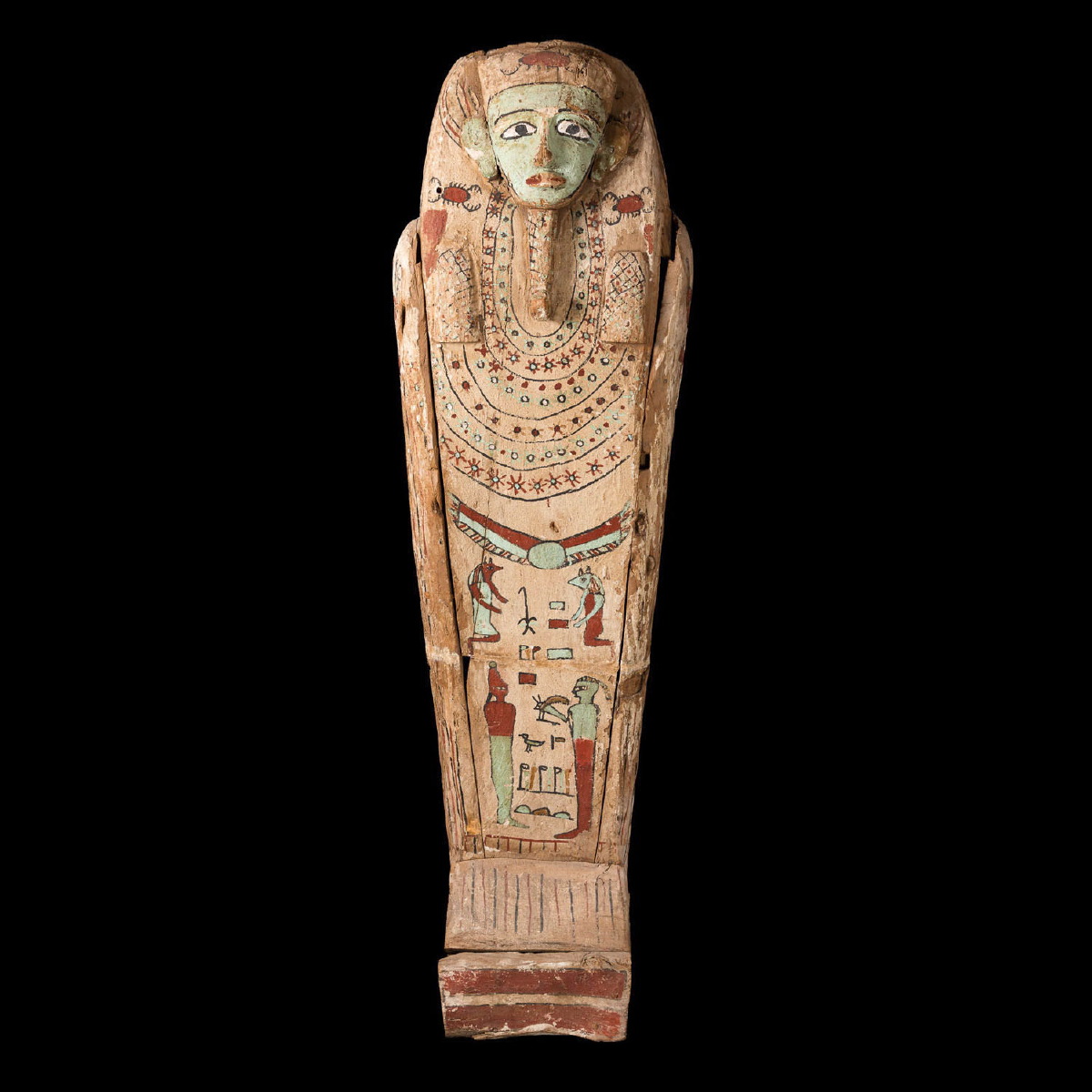 Complete sarcophagus in stuccoed and painted wood. The face is painted in green, the colour of the flesh of Osiris, the symbol of renewal and rebirth, and is framed by a long wig. It has prominent ears, two braids and a fake beard. All facial features are applied and fixed with wooden pegs from the period. Three beetles symbolizing the eternal cycle are arranged around the face. Presence of a large Usekh collar. The lower part of the decoration is composed of a winged sun and the gods Anubis, Osiris and Ptah. A short hieroglyphic text is painted between the gods, which signifies "The God who governs Upper and Lower Egypt". Appearing together, the rush symbolizing Upper Egypt and the bee of Lower Egypt represent the domain of Pharaoh, the ruler of Upper and Lower Egypt. On the sides of the sarcophagus two ibises are depicted, symbols of the god Thoth, patron of scribes and writing, and on the back a black-painted cartouche.

Obviously it is rare to find a complete sarcophagus anywhere outside of a museum. This sarcophagus which is in stuccoed and painted wood, has all its elements fixed in place with its authentic wooden pegs. Used to paint the face, the colour green, like that of the waters of the Nile, is a symbol of rebirth as it is also the colour of Osiris’ flesh, a god who permits the renewal of vegetation and watches over the return of the floods. He wears the fake beard of the nobility and a partially remained long wig. The ears, which in Ancient Egypt were used more to see than to hear, are very large. Three big brown scarabs outlined in black are placed around the face, embodying eternal new beginnings. A long Usekh collar with several rows is spread on the chest, serving as an amulet to free the deceased from his fetters. At mid-height among the decoration a winged sun representing Aton hangs over a scene from the rite of the dead. On the left kneels Anubis, the psychopompic jackal god, who became the protector of tombs and embalming after the Old Kingdom period. Facing him is the goddess of justice and truth: they weigh the soul of the deceased, as they are charged with bringing him before the court presided over by Osiris. He can be found on the lower register, standing in profile in a mummiform position, signifying that he has conquered death. He is recognisable by the high crown of Upper Egypt. Osiris, the protector of the dead, is probably facing Nephtys, his wife in the underworld. The short hieroglyphic text placed between them refers to “the good god who governs Upper and Lower Egypt”. When the bulrush, symbolising Upper Egypt, and the bee symbolising Lower Egypt, are shown together, they define the entire kingdom of the pharaoh, ruler of Upper and Lower Egypt. Two ibises are placed on the sides of the sarcophagus, symbols of the god Thoth, protector of scribes and of writing, but also the bird that would go to visit the favourite places of the living. This sarcophagus therefore fulfils its mission of interceding during the passage to eternal life. To obtain this, it was necessary for the body of the deceased to be well-preserved through mummification, and for the Kâ of the deceased to be justified, meaning that Osiris judged his earthly life to have been exemplary by weighing his soul. Furthermore, the Kâ needed to be nourished in order not to die of hunger or thirst. This sarcophagus is one of the treasures of Galerie Golconda.