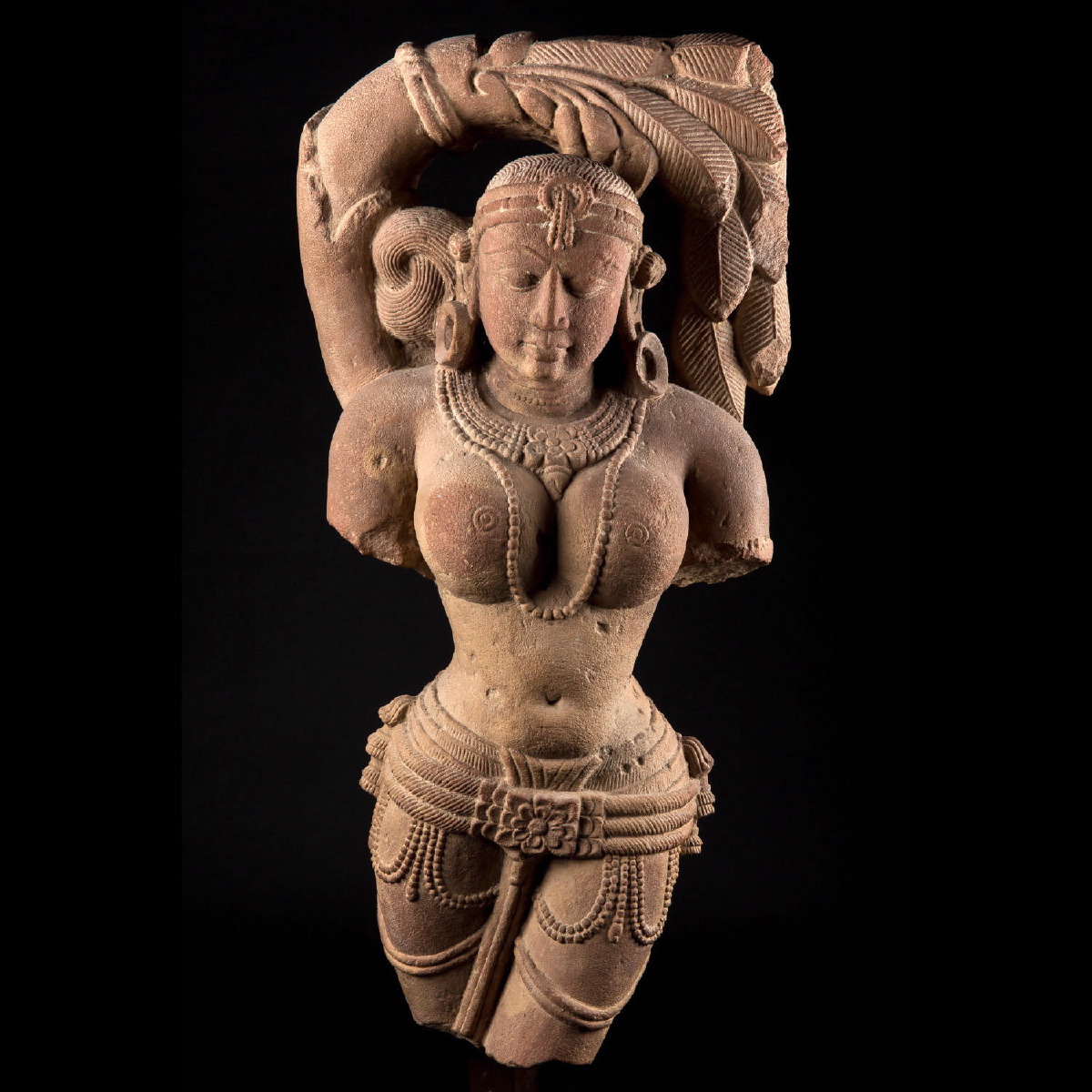 ← Return
Enquire/Buy
Certificate
❤ Add to Wishlist
Print-Out
India and Himalaya
SHALABHANJIKA TREE GODDESS
India
Object :
Nº 706
Medium :
Stone
Dimensions :
Height: 62 cm (24.4") without the base and 81 cm (31.8") with the base
Bibliography :
Published in the book « Collecting Masterpieces » Part one, by Beryl Cavallini, page 84 - 85

Sculpture in non-porous pink sandstone of medium grain and irregular colour showing detrital ferruginous outcrops of a violet hue on the breasts, the face and the shoulders. The hardness of the stone, on which we can still see traces of the carving knife, explains its good state of preservation.  The technique used by the sculptor is halfway between the ronde-bosse and the bas relief, most likely to limit risks of breakage while work was in progress. This process is typical of the post-Gupta period when they used to embed the statues in niches especially created on the façades of Hindu temples. The back of the statue is smooth, ornamented only by the tree trunk, driving symbol of the fertile sap. Standing in a swaying hip position, called tribhanga, typical of Indian sculpture, the goddess displays her fluid and undulating forms in a delicate and precise model crowned by an arched vegetal dais above her head.  An extreme meticulousness is shown in the codified treatment of her accessories: at her waist, a belt of an ottiyanam type devoted to the sun god is composed, according to the rules, of three rows of trimmings and a flat central buckle with flowers and leaves. The breasts are generous, the shrunken waist in the Damaruka (or Udukkai) shape, from the name of a drum, symbolically representing the creative capacity of the divine being. The physical features of the mango-shaped face, the fish- shaped eyes and the short and protruding chin with a dimple are accentuated according to the Indian tradition of the region of Madhya Pradesh. A Kandikai type necklace is composed of 4 rows of pearls held in their centre by a flat cabochon, recalling that of the belt, and completed by a single row of pearls. The kuntala-type hairdo, traditionally attributed to one of Krishna’s two wives (Rukmini and Satyabhama), is of an elegant simplicity. In this particular case, her leaning to the right suggests Krishna was originally on that side of the statue. Excellent state  of preservation. Clear signs of hydric erosion on the right side of the statue, particularly on the breast and on the ear, where some ornaments are missing. Obvious traces of the chisel on the perimeters and the back of the statue. This rare piece has beautiful proportions and is of museum quality.

Tree divinities were a rare motif for mediaeval Indian sculptors. In stone, they liked to celebrate the opulent beauty of the female form, symbolising the ritual of Dohada, or the fertilisation of plants through contact with women. The tree depicted here is a sal tree, with evergreen leaves and perfumed flowers, the same one that Queen Maya clung on to while giving birth to Prince Siddhartha, who would become later on Buddha. Although in India trees have remained as attributes of gods and goddesses, they have always belonged to Vedism rather than Buddhism. In ancient Indian statuary, the forms contain spirits and the bodies, souls, making the production above all spiritual. The sculptor therefore had to follow the iconographic rules of proportion, using a unit of measurement called the tala, which corresponded to the height of the hand or of the statue’s face. In order to glorify the Indian canons of feminine beauty, the artist had to draw on a register of naturally inspired metaphors: the body was slender and yet curvaceous like a vine swollen with sap, wide hips were like chariot wheels, firm and rounded breasts like bowls of nectar, the eyes shaped like fish, the face shaped like a mango, tapered arms like bamboo stems, and firm thighs like elephants’ trunks. This statuesque and yet willowy beautiful goddess is a perfect example of this particularly sensual art.