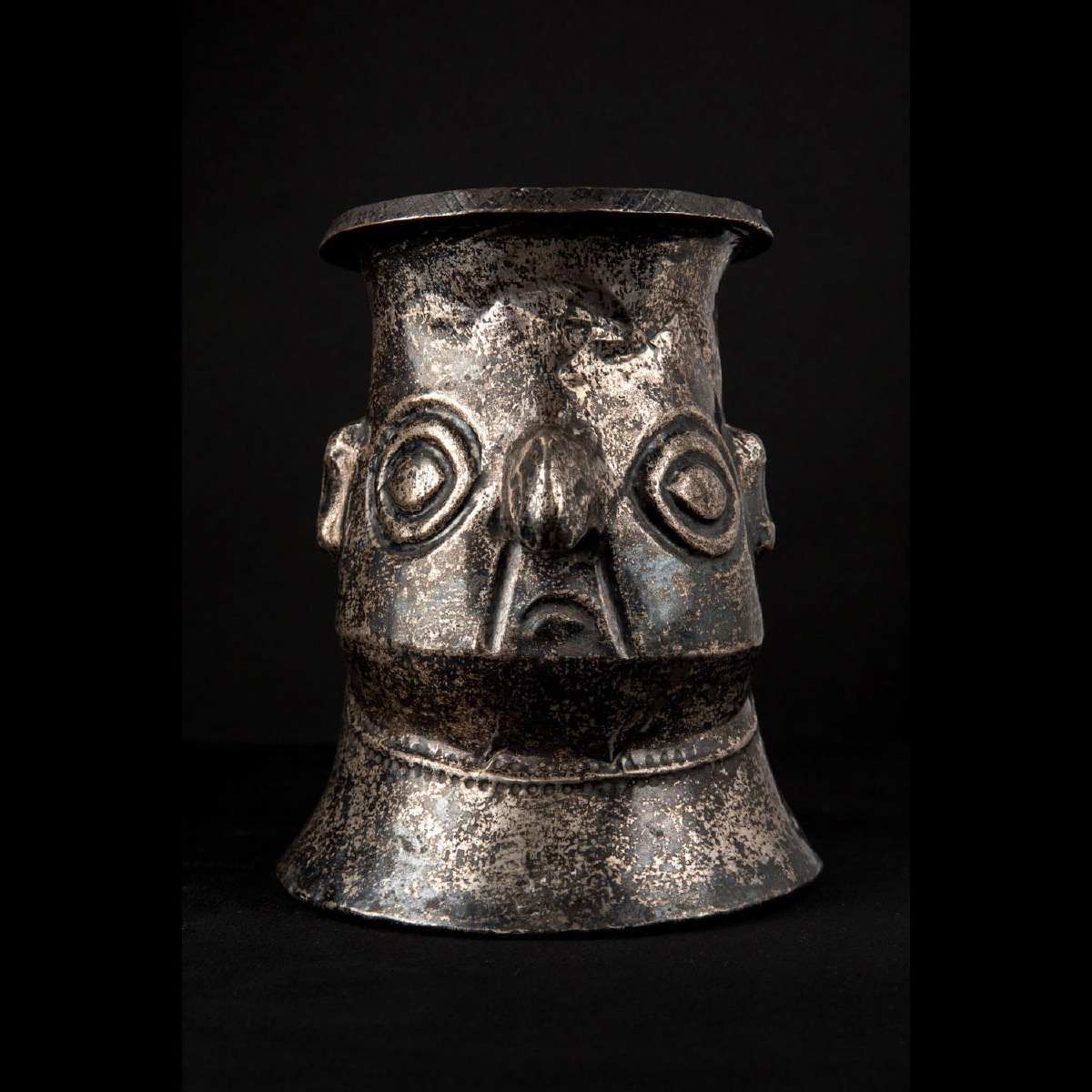 Superb vessel made of a silver leaf worked in repoussé, depicting the totemic figure of a chief or priest. The figure has an aquiline nose and wide open eyes as a sign of vigilance. He wears a necklace, and on the back the fish tail motif consisting in nine triangles. Punched silver, hammered, pushed and welded. Silver symbolically refers to the moon. Excellent state of preservation.

Silver Keros are rare because when they disembarked in the New World between the 15th and 17th centuries, the Spanish and Portuguese melted down all the precious metal they found in order to bring them back to their kings as spoils. These keros were made from silver extracted, in part, from the very important mine of Potosi. Their manufacture was controlled by the Chimù state to ensure high standards of production. Keros also existed in wood and terracotta, and were decorated with geometric designs painted in dark red and brown. Discoveries have also been made of golden Keros, which were associated with sun worship, while the colour of the silver ones linked them symbolically to the moon. This silver Kero is a vessel with a codified cylindrical form used throughout the Andean regions. The silver leaf that makes up this kero was first worked in repoussé over a wooden core to bring out the reliefs of the face, and then hammered and welded to form a first cylinder. Finally, it was minted. This one was destined for ceremonial usage, as it has the totemic figure of a chief or a priest embossed on it. It depicts a bird-like face with a prominent aquiline nose and large eyes, open as a sign of vigilance. He wears a necklace, and on the back the fish-tail motif consisting of nine triangles is probably representing a type of headdress. Under the Incas these cups were generally made in pairs because they were used to drink with a companion. The drink consumed was chicha, a kind of beer made with maize used in the libation rituals of sacrificial ceremonies. The most precious Keros, in gold and silver, were above all used as receptacles for blood, which was then poured onto the earth in the hope of obtaining a successful harvest. They were also valuable objects, offered alongside precious fabrics to local chieftains during their visits to their provinces. Although vases of this style would not reach their peak until the period between AD 1000 and 1200, this one is perfect in its proportions and its quality and its state of conservation is exceptional.