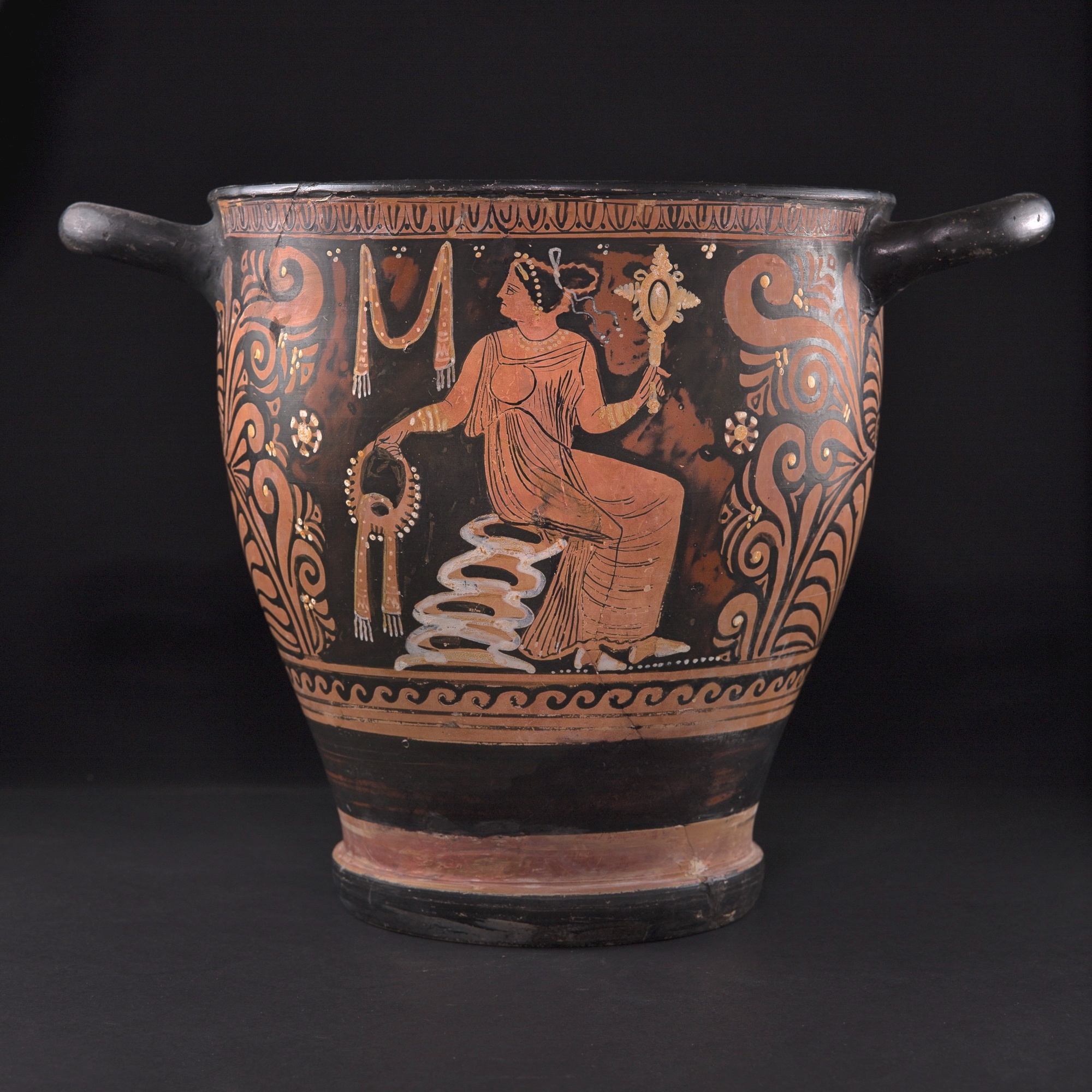 Open, two-handled terracotta vase called Skyphos. The fine, red-coloured clay is typical of Apulia. The firing took place in a re-oxidizing atmosphere with the blowhole open at 900 degrees. The dioxygen of the air influences the colour of the iron oxides: the uncoated parts become a beautiful red while the parts coated beforehand with magnetite turn a metal black. White highlights give vivacity to the painting. In very good condition despite some usual breakage that needed ancient repairs.

Skyphos are vessels with a large base and two handles and must be deep to contain wine. This one is an Athenian or Corinthian model, as its handles are like two ears fixed horizontally to the upper rim. This form, inherited from Archaic Greece of the 9th and 8th centuries BC, evolved very little over time as the only innovations possible were in its decorations and painting technique. This ceremonial vase was possibly devoted to a marriage. On one side, a naked man with an athletic physique is shown running, with a simple himation draped like a shawl. Wearing a myrtle wreath, he has a bucket-shaped basket in his left hand, while in his right he holds a torch. These symbolise both the death and the rebirth of heroes. He is shown stepping over a flowering plant on the ground, with a headstone before him and a bay tree behind him. On the other face, an adorned woman is sat on a small throne. She is dressed in a long pleated chiton, and in her right hand she has a pearled garland crown, while in her left hand she holds a finely wrought mirror. The palmette motifs on each side of the vase and the two geometric registers, the lower of which consists of Greek wavelets, are surrounded by wreath-shapes, providing this vase with a dense and harmonious decoration. The presence of white accents gives light to the whole composition. This is an excellent example of a ceremonial vase coming from Southern Italy. N° 420 Terre cuite à figure rouge - Terracotta with red figures Haut. : 29 cm - Height: 11.42” Test de thermoluminescence - Passeport culturel n° 083427