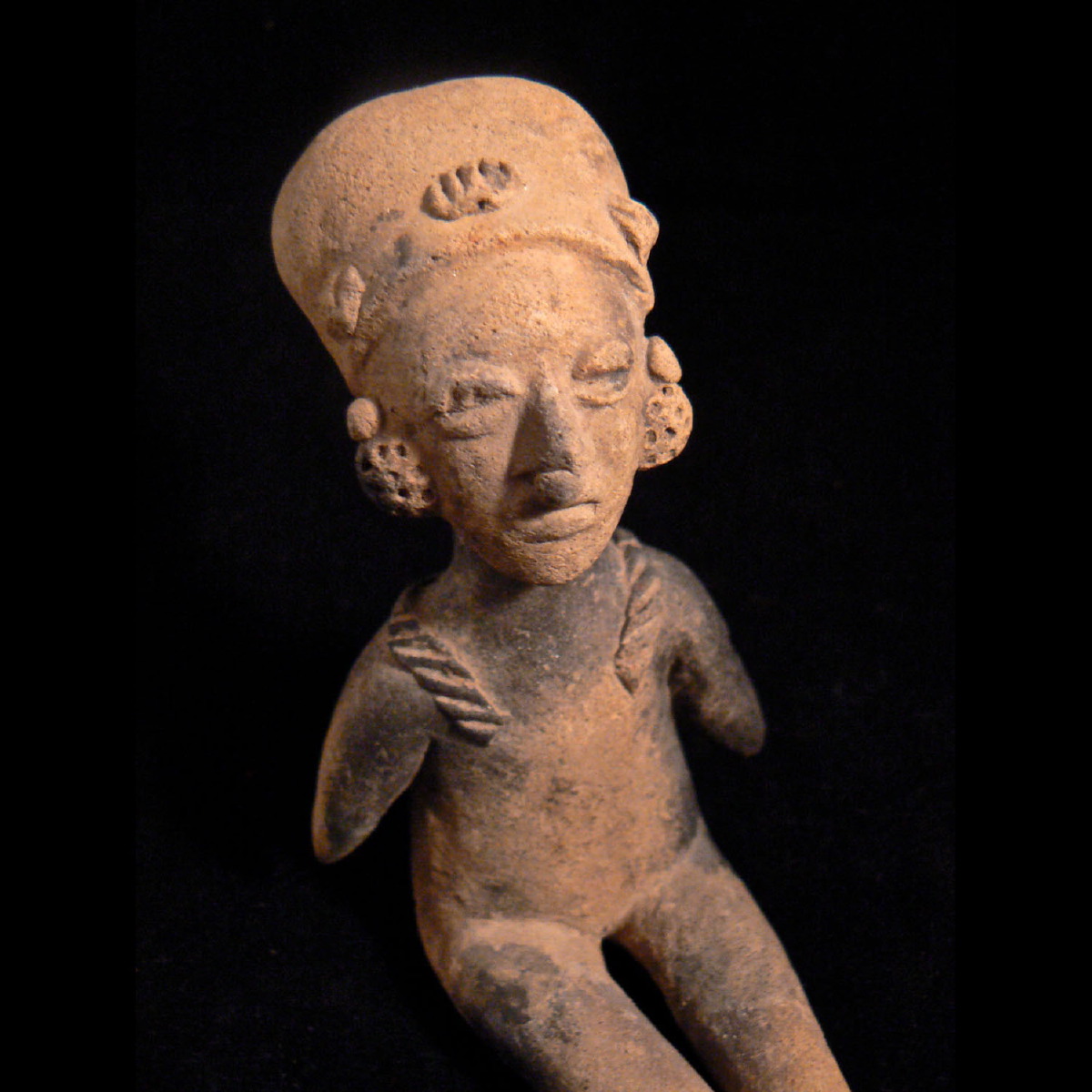 Statuette modelled in beige terracotta of a seated figure of a shaman with slightly crossed extended legs. Short arms, stylized and without hands, frontal facing. Elongated skull in keeping with the tradition of voluntary deformation of the skull performed by the aristocracy from birth. Quadrangular headdress adorned with relief patterns, prominent and oblique eyes, large hooked nose and disc ears engraved with dots. Good state of preservation. Ancient black traces of fire.


Jaina, from hail na, which means “house of water”. Numerous pre-Hispanic tombs have been found on the island of Jaina, located on the Yucatan coast. In keeping with Mayan tradition, they were filled with ritualistic pottery, utensils and small terracotta statues. These were very accurate and perfectly depicted the Mayan society of the time. Characters were depicted of a low stature, typically under the influence of the pottery originating from Veracruz. These figurines were usually placed on the stomach and in the hands of the deceased, and there is no correlation of sex between the two. It seems that these statues were mostly produced in Jonuta.

Jaina  lies just off the coast of Yucatan and boasts two crumbling pyramids but they are not what make both archaeologists and art lovers leap for joy. The entire island is a necropolis, where, for centuries before and after the conquest, the Maya elite were interred, usually with a jade bead in their mouths and accompanied by grave goods much as they were in other Maya burial grounds.What is unusual about the Jaina burials is the astonishing artistry and beauty of the small figurines clutched in the hands of the dead. These tiny statues, only a few inches tall, capture intimate glimpses of upper class Mayan life and styles in clay still showing traces of the vivid colors with which they were painted. Some are hollow with clay pellets that rattle; others have holes and serve as whistles or ocarinas. Surprisingly, none have been ritually ‘killed’ by breaking or piercing as was usual with votive offerings. Bodies are often stylized but the faces, surely portraits, are modeled in loving detail down to the faint smile of a lady, the haughty sneer of a priest or the menacing scowl of a warrior. Costumes are elaborate and represented with the same fidelity. According to Diego de Landa, who recorded many details of Maya life soon after the Conquest, producing these masterpieces seems to have been an act of penance. The artists were isolated and required to fast, exercise strict continence and undergo rigorous religious rituals until the job was done. Otherwise, the work was considered unclean and of evil omen.