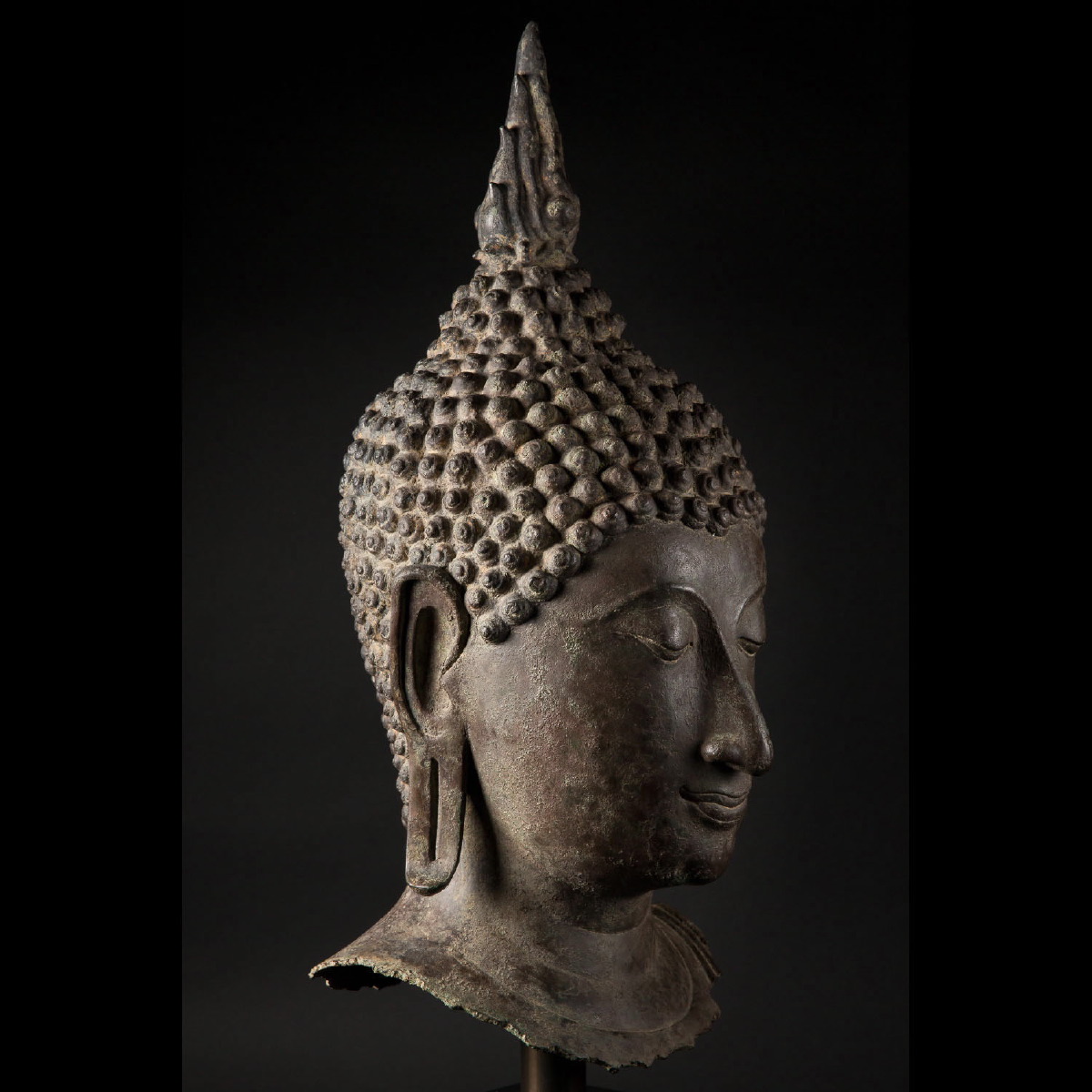 Magnificent head of Buddha from the Sukhothai period, worked in the round, using the lost wax method. The face presents a perfect oval shape, with plump cheeks, the eyelids half closed, the face particularly serene and martial at the same time. The line of the hairdo made of different rows of coiled curls designs a V at the base of the hair. The same line is elegantly designed by the eyebrows' arches that join together outlining the ridge of the nose, long, narrow and hooked. The mouth with plump lips shows a barely perceptible smile. The beauty lines of the neck are another divine attribute as well as the elongated ears that symbolize the roads of knowledge. The flame on the top of the skull, called “unisha”, is a characteristic of Sukhothai aesthetics referring to the light emanating from Buddha. Excellent state of preservation, the patina is ancient and excellent

This majestic head belongs to the Sukhothai tradition of Buddhas with a warlike air, while it was the capital of the first Thai kingdom, from the 8th to 15th century. The large-sized head reflects a wish to emphasize the supernatural morphology that the sacred texts attribute to Buddha. The perfectly oval face with full cheeks, the half-closed eyelids and the strongly arched eyebrows, picking up on a style inherited from the Sinhalese, express more deeply the detachment from the world. The line of the coiffure, made of rows of coiled and gilded curls, draws a V at the roots of the hair that highlights the eyebrow arching. In meeting it forms the bridge of the long nose, slender and hooked “like the beak of a parrot”. With the well-defined mouth and barely perceptible smile, this Buddha communicates great serenity. The three creases of beauty on the neck as well as the elongated ears are divine attributes that symbolise the two paths to knowledge. The flame on top of the head, the Usnisha, nicely designed is a characteristic of Sukhothai art, being a reference to the light emanating from the god. The history of Sukhothai corresponds to the birth of the Thai nation. Starting in 1278, the year of their independence from Khmer domination, the Thais would develop a stylistically autonomous culture, establishing Buddhism as the official religion, even though Hinduism, inherited from the Khmers, would always remain. Today, there still stand 76 edifices built by the kings of Sukhothai within the city, many chedi that are sanctuaries. The great number of Buddha statues, standing, reclining, walking, in gold, bronze or stucco were planted in an enchanting site of rice paddies and coconut groves.