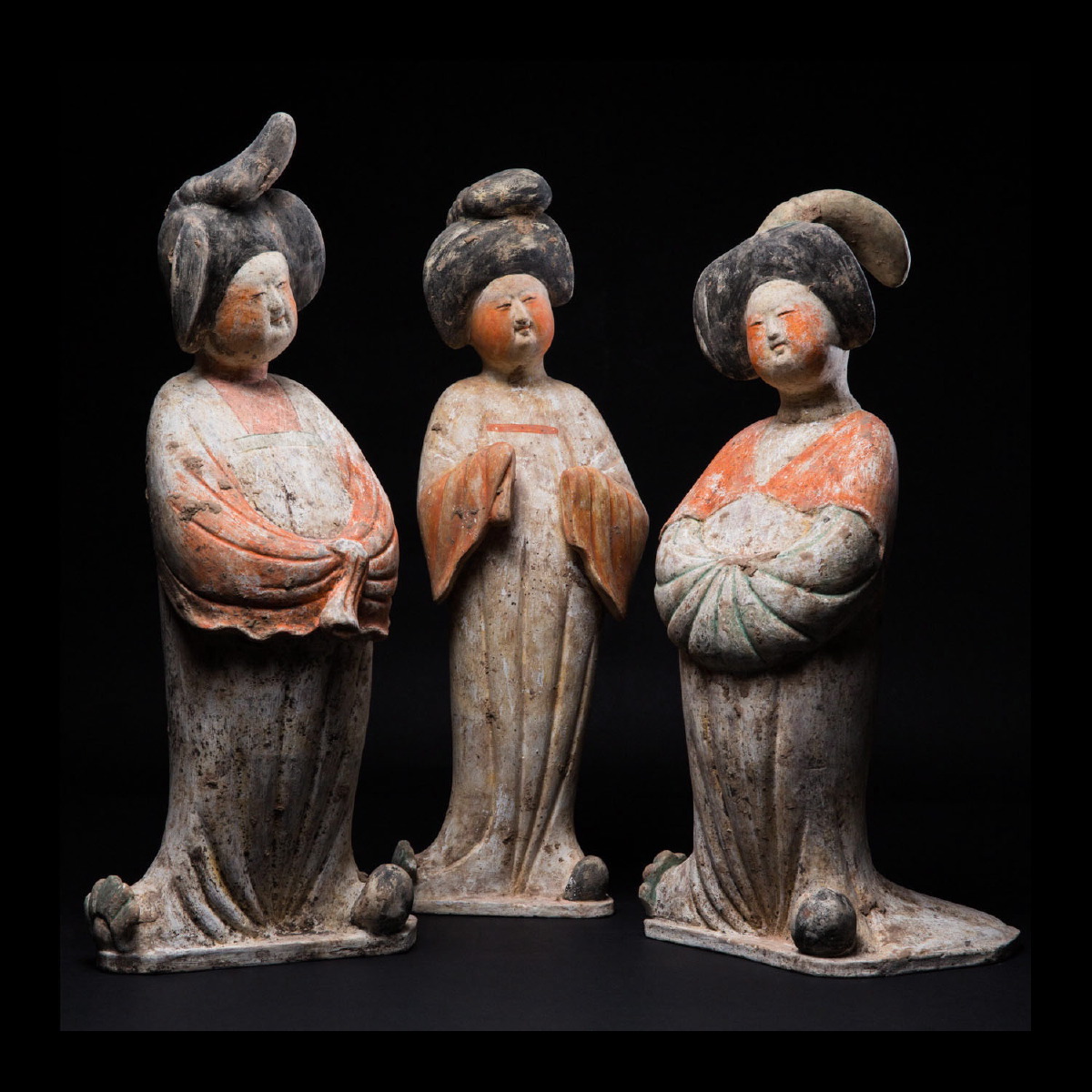 Beautiful and rare set of three courtesans with generous curves in orange and green polychromatic terracotta. Faces delicately drawn with a fine brush, the cheeks made up with an intense pink according to the taste of that time, and voluminous and eccentric buns. Ample dresses matched with small jackets and with wide floating sleeves covering the hands. All of them wear a slipper with a corolla on the right foot and a rounded, typical slipper with upturned toe on the left foot. Excellent state of preservation however possible restoration as usual for terracotta. Ancient traces of earth still visible. An exceptional set of ladies, of high size and quite lively. Museum quality, it is a set for a qualified collector.

Towards 730, during the golden age of the Tang dynasty an aesthetic revolution took place: plump women came into fashion! Emperor Xuanzong fell madly in love with a generously proportioned concubine called Yang Guifei. A new fashion was launched to suit her voluptuous figure, favouring large, soft garments often composed by overlaying transparent silk veils. The sleeves were large and floating, in order to hide the hands. Over the dress they wore a sort of camisole, called banbi, which covered the chest, and was often flowered or embroidered. Hairstyling became very important: people came to love very voluminous chignons whose shapes were eccentric but codified, each one having a precise form and name. These would then be copied by the Japanese when Chinese monks went to teach them Buddhism. Makeup was accentuated - they liked very pink cheeks, a small mouth painted red, and eyebrows lined in black, to make the gaze more appealing. Even footwear was re-invented, as ladies started wearing shoes with raised, pointed ends, to which were added all sorts of decorations, flowers, and baubles, and they didn’t hesitate, as we do here, to wear a different shoe on each foot. So our three court ladies were not afraid of eccentricity! This magnificent, rare trio is perfectly within the sociable and joyful spirit of the Tang. As we see, their conversation is animated, and their expressions, as well as their body language, are particularly well studied. Each one has its own character, and although there is nothing superfluous about these statues, they communicate this moment of feminine intimacy wonderfully. An ensemble with a matchless poetry, a great collector’s piece.