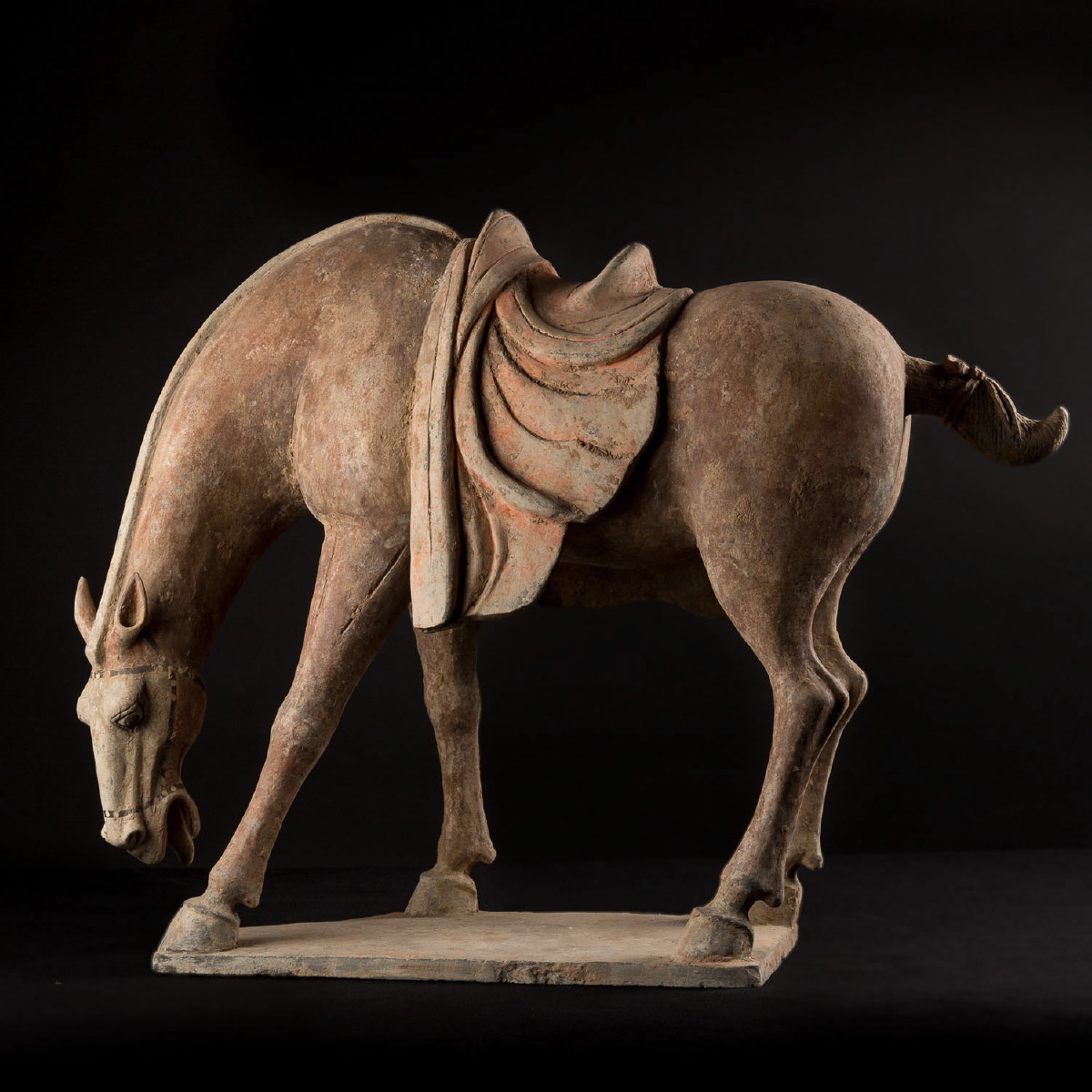 Horse of a big size, in moulded beige terracotta covered with a white to brownish slip. Nice traces of an ancient polychromatic decoration: the saddle is orange and the harness is painted in brown. The horse has the four legs fixed on a terrace. Shown while drinking, the mouth is open and the tongue visible. Overall great elegance of the animal, the tail plaited as was done for the animals belonging to the nobility. Some scratches and signs of age and excavation, traces of soil. Overall very good condition. Some possible ancient repairs.

There are many interesting common ground between the Han and Tang dynasties: both had to face many centuries of geographical and political consolidation of their immense territories. This obliged them to integrate multiple external influences, as much social as artistic. At the same time, these periods displayed an important creative character, the emergence of a very coherent style being part of a codified aesthetic particularly sophisticated. For each of them the preceding dynasties of the Qin and the Sui were very authoritarian but formative in establishing the apparatus of the state. Thus, the first Han and Tang emperors who both gained power by force, were remembered by posterity as Gaozu, the “illustrious ancestors”. The Tang succeeded in maintaining peace at their borders, encouraging the aristocracy, already mixed-race, to sign marriage alliances with nobles from the Steppes. This provided them with sizeable contingents of horsemen, since the steppes were well adapted to the raising of horses. They could be imported via the Silk Road, along with camels, spices and silks. Soon afterwards, Imperial stud farms were constructed, and breeding programmes were developed, producing a total of 700 000 available horses by the middle of the 7th century. These would revolutionise the emperors’ strategic options, as by forming a sort of enormous mobile front, they rendered the Han Great Wall obsolete. Thus, horses naturally became the emblem of the Tang dynasty. After having done great service in war, they were transformed into statues specially produced to accompany their deceased as far as their last resting place. Depictions of them, reflecting a perfect knowledge of the animal’s anatomical composition, became sensitive and animate. They were a long way away from the rigid depictions of the Han era. These thoroughbred are without doubt masterpieces of human arts. I like so much the delicate poetry of this drinking horse.