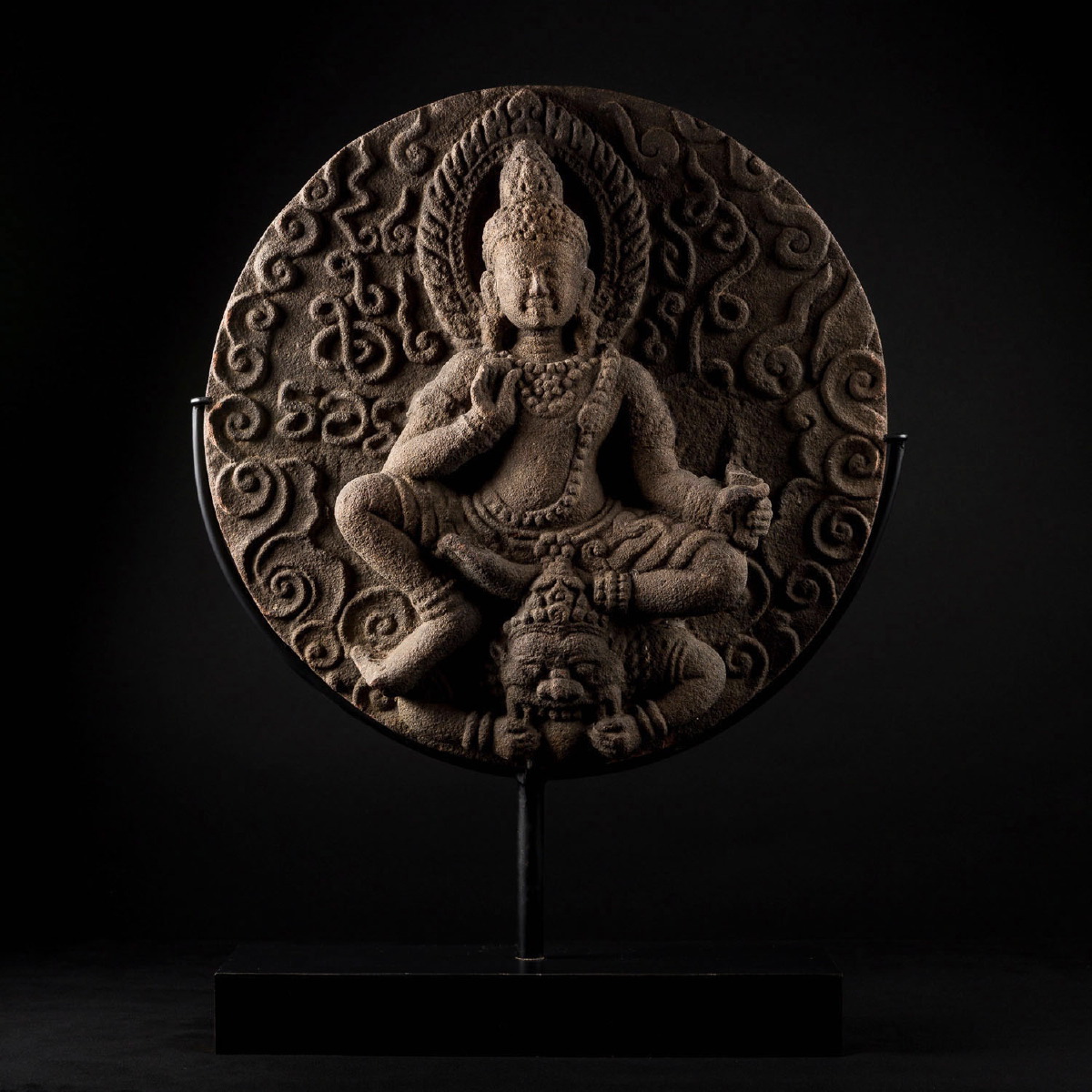 Rare bifacial tympanum of a circular shape, sculpted in the round in dark grey schist with clear traces of erosion. The main character is Lokesvara depicted holding his attributes: the lotus flower and the rosary, here missing. Dressed in a loose sampot, the naked bust richly adorned with necklaces, bracelets at the ankles and wearing heavy earrings. One of the folded legs leaning on Kâla’s head (meaning both “time” and the colour black in Sanskrit). The latter, following the traditional iconography, has the wide face of a lion, an impressive jaw with big prominent teeth and dilated nostrils. The flat back of the tympanum is decorated with clouds in the center and symbolic waves all around as a sign of the Kâla devil who spits foliage and has the body of a crocodile. On the other side, a stupa with the typical pyramidal shape is surrounded by sunrays in relief, and Buddha is sitting in the position of reassurance and safety.  The piece shows clear signs of erosion but no visible repair. Excellent state of preservation.

Tympana of this origin are rare, and those with a circular form especially so, even though some of the same style are found at the Khmer temple of Banteay Srei. This tympanum is decorated on both sides. It must have been positioned over the door of a temple, and each side had obviously to bear a message for the faithful. On one side Lokesvara is represented showing his symbols, the lotus flower and the rosary, missing here. He is dressed in loose short trousers called sampot, his torso bare and richly adorned with necklaces, ankle bracelets and heavy earrings. One leg is folded, in accordance with the traditional pose, resting on the head of Kâla, a word meaning both “time” and the colour “black” in Sanskrit. Following the iconography of the time, the latter has an extremely expressive face, as large as a lion’s, with an impressive jaw containing large prominent teeth, and exaggeratedly dilated nostrils. The tympanum’s flat background is decorated with clouds near the centre, and symbolic waves around the outer border, linked to the demon Kâla. In Buddhist Khmer art, the Bodhisattva Lokesvara is frequently seated on Kâla’s head. From the 12th century AD, during post-Khmer period, Lokesvara was revered as the principal element of Mahayana Buddhism called “The Great Vehicule”. When he is depicted as here with two arms, he is associated with the Indian demon of eclipses: Rahu, who is supposed to repulse evil spirits from sacred temples. The other side is sculpted, showing a pyramid-shaped stupa surrounded by rays of light in relief, which cover the rim, while Buddha is seated at the centre in the position of no fear.