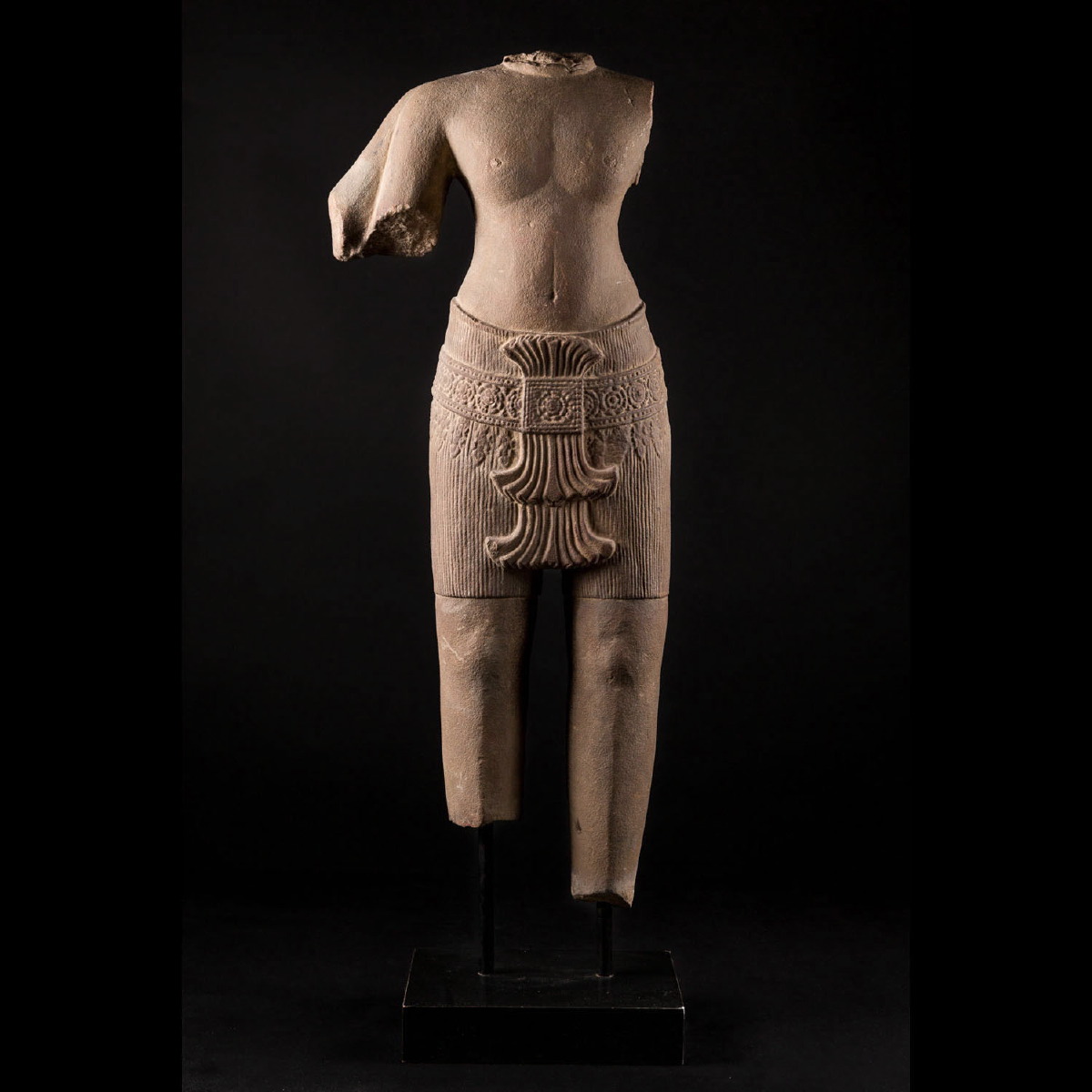 Beige sandstone statue representing Vishnu completely sculpted in the round. The headless figure is hieratic, the body nude except for a very richly worked belt, called a sampot, striated and with a double anchor motif.

Vishnu is the second of the three gods of Hinduism, along with Brahma and Shiva, and he is the one most frequently depicted by the Khmers in particular. The three gods form the trimurti, which means "triple form" in Sanskrit, personify the three states of the universe: manifestation, preservation, and destruction, with Brahma as creator, Vishnu as protector and Shiva as the destroyer. By constantly reincarnating as different avatars, Vishnu is free from the cycle of rebirth and can therefore help to save the world from its own materialism. He established himself as a divinity of life, death and re-birth in Cambodian statuary under the aspect of Chakravartin, or the universal monarch. He is by far the most frequently depicted god at Angkor and the temple of Angkor Wat, one of the most beautiful in the world, was originally dedicated to him alone. King Suryavarman chose to set his statue there to act as a protector. Vishnu is recognisable by his four arms, signs of his all-powerful nature. His physical strength is represented by his two front arms, while those at the back are linked to the spiritual world. The headless figure is hieratic and majestic. The man's body is bare chested and he wears an ornate and finely-worked sampot held in place by a golden belt of worked metal. The quality of the fine and regular pleats deserves attention, as do the details of the belt, completed by a double anchor motif. This one is especially long, reaching the low border of the sampot and indicating that this piece belongs to the most classical period of Khmer stylistic experimentation. The slim-waisted chest represents an idealised Image which indicates a plastic quest for perfection, unhesitatingly distancing itself from reality to attain the perfect beauty of the gods. The pale beige sandstone is typical of the caves of the Kulen mountain region. One cannot help but admire the delicacy of the attractively worked details designed to ornament gently such a powerful god.