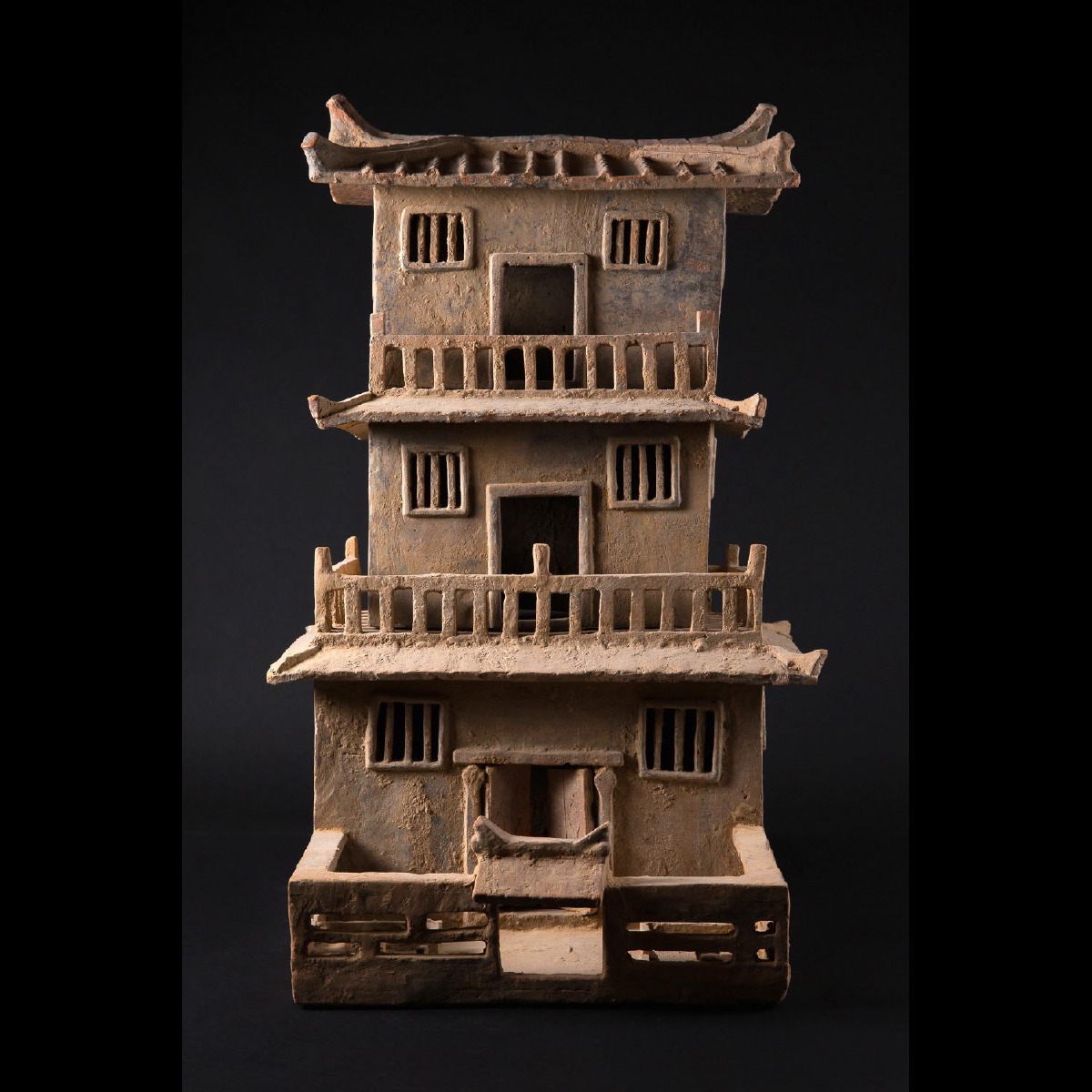 Nice big country house in three parts from the Han dynasty. Conceived from several moulded elements freely assembled, this Mingki of a Han dignitary’s house, very realistic with its balconies and roofs, was made of grey-tinted terracotta typical to the period. Thick traces of hazelnut-coloured mud are still stuck to it. The base is composed of a courtyard with a gate. On this kiosk, the superstructures are placed vertically. Note the size of the roofs, combined with the tiles, and the shape of the courtyard in front, which must have served for the animals. Good state of preservation, no missing parts, some old customary restoration work done.

Architecture is a reflection of techniques available in a certain period and influenced by local climatic conditions, but it is also marked by the predominant beliefs, which in Han China were Taoism and Confucianism. For centuries, Chinese houses were built mainly of wood; the brick or waddle-and-daub walls were not support structures, they only served to create the interior partitioning walls. But some rare houses in stone have been found. There was no foundation, a simple platform was built on which, little by little, were set the rooms that often remained separate from each other. The architecture of China is particular as the houses were made up of aggregates of small structures organised around successive courtyards. The main door was always in front, facing the sun, and the rooms used intimately by the family were in the back. Low houses were favoured, and those with more storeys were composed of a high building like a tower that overlooked all the other lower buildings. The pagoda-type roofs, probably invented to assuage the great rains of southern China, only appeared under the Tang. In the Han era, the roofs were like this one, with Roman half tiles, and the architectural elements, the façade, the colour, the house’s size and decorations, were subjected to the imperial power. This power, which decided clothing fashions, also ruled in an authoritarian manner over housing and city planning. Also, rules clearly ranked the buildings, according to the status of their owner or its function. Our two houses are perfect examples of the architecture that the Han took with them to the grave. The green house with the exquisite silver glaze and the very big farm in terracotta are both countryside houses. The larger one must have stored grain or straw and the farmyard animals were would have been kept there. They were probably the pride of rich tradespeople who wanted to present them to the gods as proof of their economic and social success. These houses, which are always much admired by visitors to the gallery, make quite simply, fantastic decorations for your home.